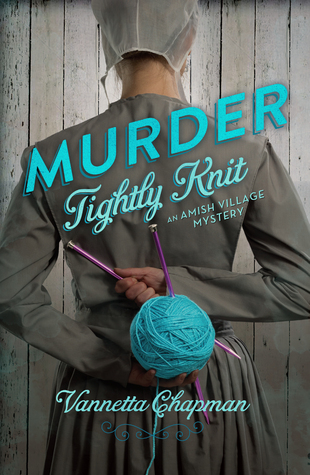 Murder Tightly Knit by Vannetta Chapman is an Amish murder mystery book and I thoroughly  enjoyed it.  I read as many Amish mysteries as I can find, and this one did not disappoint me.

The action takes place in Middlebury, Indiana, in an Amish/English community.   A young Amish man has been murdered with a crossbow, and no one has any idea who the murderer is or why the man would be killed.  The people of the community find it hard to believe that anyone Amish would be guilty, but some of the clues point that way.  While the police are investigating, two local women, one Amish and one English, decide to launch their own investigation into the death.  The two are not new to investigating and were pivotal in solving a murder that had occurred earlier in the year.  There are many suspects to consider, some of which are their friends.  Will they be able to solve the crime before someone they care about is arrested or more murders occur?

The mystery is carried on throughout the entire book and I was not able to determine the killer until it was revealed in the end.  There are many twists and turns to keep the reader guessing and things are not always as they seem.

The writing style flows easily and the book is a quick easy read.  The author’s descriptive style pulls the reader right into the action and pulls you along until the conclusion.  The characters are well developed and well rounded and are people you can care about.  One of my favorite things about this book is that the Amish and English worked together.  In a lot of the Amish books I read there is very distinct divide between Amish and English ways.  In this book there was not as clear of a divide and the two groups worked together closer than normal.   I really liked that.

I would recommend this book to anyone who enjoys a well written murder mystery.  If you like Amish mysteries, then this is a must read for you.  I have not read any other books by Vannetta Chapman but now I have a new author to catch up on, and I am excited about that.

I received a free copy of this book from NetGalley in exchange for a honest review.  I would like to thank NetGalley and Zondervan Fiction for the opportunity to read and review this book.