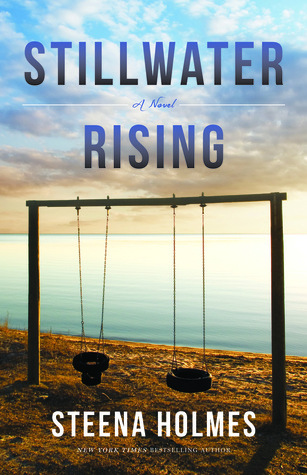 Stillwater Rising is the story of a small town community that is dealing with the horrific tragedy of a school shooting.  Several families in the community are dealing with the loss of one of their children.  One of these families is the Crowne family.  They lost their son that day and they are struggling to come to terms with it.  Each is struggling in their own way.  Jenn is grieving and is angry and wants to see the school torn down and a Memorial built in it’s place.  She cannot forgive the shooter’s mother and cannot understand how others can support the woman.  She is totally broken and is unsure if she will ever be whole again.

Her husband is trying to put on a brave front for the community and the summer visitors that have descended on the town.  As far as Jenn can tell, her husband has gotten past the tragedy and is ready to move forward with their lives.  He is still burying himself in his work, which is nothing new.  She does not understand how he could recover so quickly.

Jenn’s daughter Charity is ready to become a “victor” rather than a “victim”.  She wants to return to school and begin the healing process.  She wants to move forward and have her family heal.  She will never forget her brother but she knows the family must find a way to pull together and continue on with their lives.

Charlotte, the mayor of Stillwater Bay, is trying to keep the community together.  She fears that the tragedy will destroy her town and she cannot let that happen.  Her husband, who is the principal of the school where the shootings took place, is being regarded as a hero.  But whenever someone begins praising him for his heroic actions, he has a panic attack. Charlotte knows something is wrong but has no idea what the problem is.  But she has the town to worry about, and her husband’s problem will have to wait.

Julia is the shooter’s mother, and she is being harassed by many of the people in the town.  She knows she deserves it and does not blame them.  She should have seen the signs and known what her son was planning.  She should have been able to prevent the shootings but she did not.  She will never be able to forgive herself.  But she is still a mother and is grieving the loss of her own son like any mother would.  She is defeated and heartbroken.

Samantha is a reporter who was sent to Stillwater Bay to cover the story.  After all the other reporters, Samantha stays in the town because she feels there are still stories to be told.  She also has a personal reason for staying but we never find out that reason.

Each chapter in the book is labeled with one of the main woman’s name.  That chapter then tells their story.  I really liked this writing technique and I really liked that the story examined the different perspectives of the tragedy.  We got to see a inside look at the grieving victim’s mother, the grieving shooter’s mother and the mayor of the town trying to keep the community together.  I have read another book concerning a school shooting and it was written more from the perspective of the prosecuting attorney.  I like the fact that this book dealt with the families in the aftermath.  It gave insight into how these people felt and what they had to deal with.

There are some areas where I feel the book could have been more developed.  We do not know what Samantha’s personal reasons for staying are. We do not get an account of what really happened at the shooting and I wanted to know a little more about what happened.  We do not know the reason behind the shooting until the very last paragraph of the book.  There is a surprise twist involving the reason and I wish that had been further developed.  I feel like the book ended too abruptly and I wanted more of a conclusion rather than be wondering about the details and what was going to happen.  Perhaps there will be another book written about Stillwater Bay that will answer some of my questions.  I hope that is the case.

I received a free copy of this book from NetGalley in exchange for a honest review.  I would like to thank NetGalley and Lake Union Publishing for the opportunity to read and review this book.