With their wedding (and all the complications that came with it) over, Zoe and Zak are on their honeymoon on Heavenly Island.  And in true Zoe and Zak fashion, it is not your typical honeymoon.  For one thing,  they did not go on their honeymoon alone.  They took Charlie, Zoe’s dog, and their young friends Alex and Scooter with them.  For another thing, Zoe ended up in jail on the second day of their trip, a suspect in a murder.  She was released from jail but told not to leave the island.  She was also told not to do any investigating on her own, but if you know Zoe, you know she will never listen to that order.  So Zoe and Zak spend their honeymoon spending time with the children that went with them, spending time alone (after all it is their honeymoon) and trying to find the killer to clear Zoe’s name. 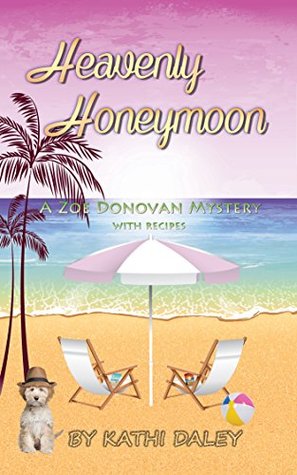 This book was a little different than the other books in the series.  The book starts out with Zoe already in jail and the crime already committed.  Since they are not in Ashton Falls, Zoe does not have her family and Levi to help with the investigation (Ellie does eventually join them on them island).  She also did not have her friend Sheriff Salinger to compare notes and share information with.  And the way the murder was solved was not done in typical Zoe fashion (I do not want to say anything more about this because I do not want to give anything away).  I enjoyed these differences and thought it added a nice variety to the series.

As is usual with any books written by Kathi Daley, the characterization and the descriptions are top notch.  I feel that her books are character driven and she is so talented in the way she brings all of her characters alive.  They all seem so realistic and well developed that they feel like people you know and care about.  I always enjoy reading about Zoe and Zak and what is happening in their lives.  Some issues that were facing Ellie and Levi seem close to being resolved, which is good to know.  As far as descriptive writing goes, Kathi Daley has again taken me somewhere that I could completely picture in my mind.  Even though I was not reading about their home town, I felt like I was right there on the island, watching everything that was happening first hand.  I think this is awesome when reading a book.  The writing style flows smoothly and the book is a quick, easy, clean read.

I cannot recommend this book (and this series) enough for anyone who enjoys a well crafted cozy mystery.  If you have not read the Zoe Donovan series, do yourself a favor and start at the beginning.  I am sure you will enjoy them all.  If you are familiar with the series, you are sure to enjoy this latest installment.

One thought on “Review of Heavenly Honeymoon”