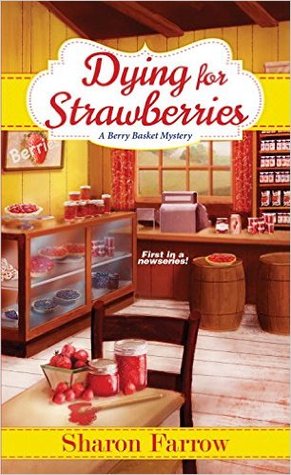 With seasonal crowds flocking to its sandy beaches, lively downtown shops, and the Berry Basket, a berry emporium with something for everyone, the lakeshore village of Oriole Point is ripe for summer fun—and murder.

Much has changed for Marlee Jacob since she returned to Oriole Point, Michigan, three years ago. Between running the Berry Basket, dodging local gossip, and whipping up strawberry muffins, smoothies, and margaritas to celebrate the town’s first annual Strawberry Moon Bash, the twenty-nine-year-old hardly has time for her fiancé, let alone grim memories of her old life in New York . . .

But unfortunately for Marlee, Oriole Point is muddled with secrets of its own. First her friend Irina disappears after an ominous dream. Next the seediest man in town threatens to crush her business. Then an unknown person nearly kills her on the night of the Bash. When she discovers a dead body while searching for Irina, Marlee realizes she’ll have to foil a killer’s plot herself—before the past permanently stains her future. (Goodreads)

Marlee loves the berry shop that she has opened and wants to see it continue to grow.  When that growth is threatened, and her lease is likely to be ended, she is beside herself with worry.  Add to that her friend, Natasha, is missing after being seen fighting with her abusive husband, and her worry increases.  And after she is attacked, and she finds a dead body, she knows she has to do something to find the killer, before more dead bodies turn up, possibly even hers.

The characters are well developed, well rounded and three dimensional.  I enjoyed getting to know Marlee, her friend Tess and her friend Max.  I am not quite sure how I feel about Marlee’s fiance, Ryan.  They seem to fight quite a bit and he did not seem like he supported her very much.  He seemed a little too distant to me and I did not feel like he was completely in love with her.  In my opinion, I think there is a better match for her.

The writing style flows smoothly and the book is an easy fast read.  I liked the fact that the murder did not take place until about forty percent into the book.  This is not the norm when it comes to mysteries, but there was so much other suspense going on that it seemed like the perfect time to introduce the body.  There were so many suspects to consider that is was like a Who’s Who in killers.  And there were enough twists and turns and clues to pick up along the way that I never did figure out who the murderer was until it was revealed at the end.

I would recommend this book to anyone who enjoys a well crafted cozy mystery.  I am happy that this is the first book in what I hope is a long series.

I received a free copy of this book from Netgalley in exchange for a honest review.   I would like to thank NetGalley and Kensington Books for the opportunity to read and review this book.

2 thoughts on “Review of Dying For Strawberries”