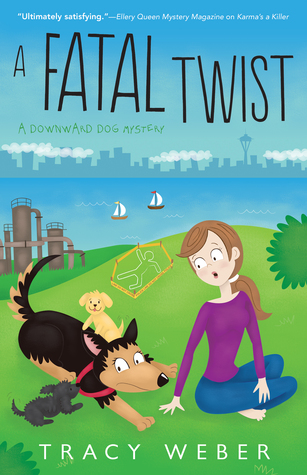 The characters are well rounded, well developed and three dimensional.  I just love Kate. She is a hard working, caring woman who is loyal to her friends and would do anything to help them in a time of need.  But she also has a temper, that she is trying to control, and does not like for people to tell her what to do.  But that is okay, these traits just make her seem more real to me.  She is flawed, just like all of us are.  Reading about the interaction between Kate and her best friend, Rene, and Rene’s husband, Sam, had me laughing out loud.  The bickering and bantering between them was very entertaining.  I loved reading about the relationship between Kate and Bella, her German Shepard.  There is not anything that Kate would not do for Bella, and Bella feels the same way about Kate.  You can tell that the author is a real animal lover.  Add two little puppies that get into all kinds of trouble, and who are real Houdini’s, and you have all the ingredients for mischief and mayhem.  I loved all of the characters, both the two legged and four legged ones, and in my opinion,  that makes this book stand out in the best possible way.

The author is very talented in her descriptive writing and and through much of the book, I felt like I was right there, watching all of the action taking place around me.  She is also very talented in creating suspense with just the written word.  There were enough suspects to consider and plenty of twists and turns to make figuring out the killer nearly impossible.   I did not figure it out until it was revealed at the end.

I would recommend this book (and series) to anyone who enjoys a well crafted cozy.  If I could, I would give it more than five stars.  If you are looking for a book that has great characters, laugh out loud moments and lots of adorable fur babies, then this is the book for you.  If you have not read the first three books, what are you waiting for.

I received a free copy of this book from NetGalley in exchange for a honest review.  I would like to thank NetGalley and Midnight Ink for the opportunity to read and review this book.

Happy Release Day to Tracy Weber.  The fourth book in her Downward Dog Mystery series has been released this week, A Fatal Twist.  It is a great book (and a great series) and I would recommend the whole series for cozy lovers. 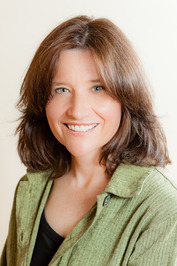 Tracy Weber is the author of the award-winning Downward Dog Mysteries series featuring yoga teacher Kate Davidson and her feisty German shepherd, Bella. Her first book, Murder Strikes a Pose won the Maxwell Award for Fiction and was 2015 Agatha award nominee for Best First Novel. The fourth book in her series, A Fatal Twist, will released January, 2017 by Midnight Ink.

Tracy and her husband live in Seattle with their precocious German shepherd puppy, Ana. When she’s not writing, Tracy spends her time teaching yoga, walking Ana, and sipping Blackthorn cider at her favorite ale house.

Sign up for her monthly newsletter including mystery recommendations, yoga tips, and series news at http://tracyweberauthor.com/newslette….

Tracy loves connecting with readers! Feel free to visit her at TracyWeberAuthor.com, friend her on Facebook at https://www.facebook.com/tracywe, or e-mail her at Tracy@WholeLifeYoga.com. 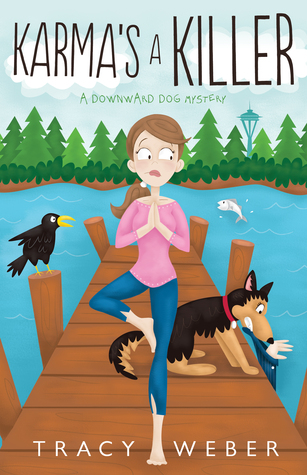 When Seattle yoga teacher Kate Davidson agrees to teach doga (yoga for dogs) at a fundraiser for a local animal rescue, she believes the only damage will be to her reputation. But a few downward-facing dogs are the least of Kate’s problems when an animal rights protest at the event leads to a suspicious fire and a drowning.

The police arrest a woman claiming to be Kate’s estranged mother and charge her with murder. To prove her innocence, Kate, boyfriend Michael, and German shepherd sidekick Bella dive deeply into the worlds of animal activism, organizational politics, and the dangerous obsessions that drive them. All while discovering that when it comes to murder, there’s no place like home. (Goodreads) 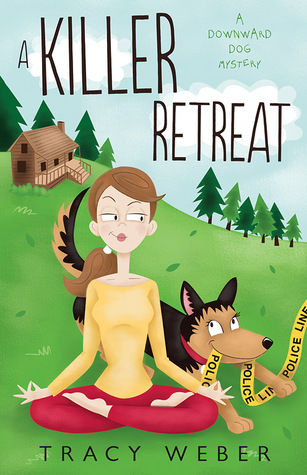 When Kate Davidson gets an offer to teach yoga classes at the Elysian Springs resort, she jumps at the opportunity–even if it means enduring the wedding ceremony of the center’s two caretakers. But avoiding the M-word turns out to be the least of Kate’s problems when a wedding guest is found floating face-down in the resort’s hot tub, shortly after a loud, public fight with Kate.

The police pick Kate as their number-one suspect, so she teams up with her boyfriend Michael, best friend Rene, and German shepherd sidekick Bella to find the real killer. They must solve the crime before the police arrest Kate, or her next gig may last a lifetime–behind bars. (Goodreads) 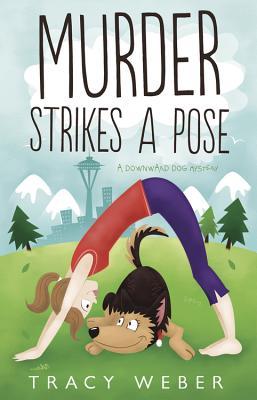 Yoga instructor Kate Davidson tries to live up to yoga’s Zen-like expectations, but it’s not easy while struggling to keep her small business afloat or dodging her best friend’s matchmaking efforts.

When George, a homeless alcoholic, and his loud, horse-sized German shepherd, Bella, start hawking newspapers outside her studio, Kate attempts to convince them to leave. Instead, the three strike up an unlikely friendship.

Then Kate finds George’s dead body. The police dismiss it as a drug-related street crime, but Kate knows he was no drug dealer. Now she must solve George’s murder and find someone willing to adopt his intimidating companion before Bella is sent to the big dog park in the sky. With the murderer on her trail, Kate has to work fast or her next Corpse Pose may be for real. (Goodreads)