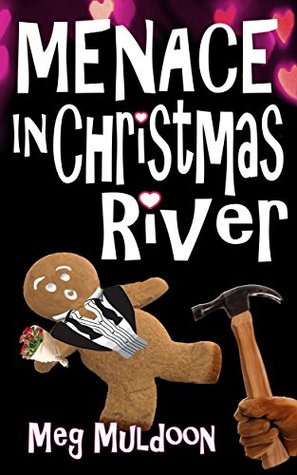 It’s Valentine’s Day in Christmas River, but the holiday promises to be anything but sweet for Cinnamon Peters.

When asked to help judge the prestigious Chocolate Championship Showdown Competition at the last minute, the pie baker extraordinaire is hesitant about putting down her rolling pin in place of a clipboard. But when she discovers that one of her co-judges will be famous celebrity chef Cliff Copperstone, Cinnamon agrees to help.

When a freak blizzard hits Christmas River on the day of the competition, Cinnamon finds herself not only in the middle of a crisis, but also in a mystery as sinister and dark as a bar of bittersweet chocolate.

Because somebody at the competition has murder in their heart this Valentine’s Day.

And things are about to take a very menacing turn.

The chocolate really hits the fan in the eighth installment of the Christmas River Cozy Mystery series.  (Goodreads)

The characters are well rounded, well developed and three dimensional.  I always love spending time in Christmas River because I get to visit with old friends.  Cinnamon and Daniel are such a great couple and I love how supportive he is of Cinnamon.  And I love spending time with Warren, Cinnamon’s grandfather.  The relationship between the two is very special, and anytime I get to read about them, that makes me happy.

The author is very talented in her descriptive writing and through much of the book, I felt like I was right there, watching all the action taking place.  I felt like I was stuck in the blizzard along with everyone else and I felt like I could see the chocolate creations that were being judged.

She is also very talented in creating suspense with just the written word.  With so many suspects to consider and so many twists and turns, it was nearly impossible to figure out who the culprit was.

I would recommend this book (and series) to anyone who enjoys a well crafted cozy.  If you like your cozies to have characters that you can care about, then be sure you read this series.