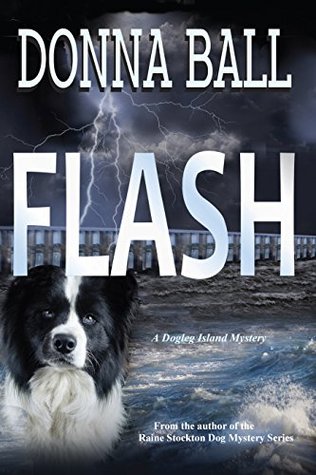 Almost two years ago the sleepy little community of Dogleg Island was the scene of one of the most brutal crimes in Florida history. The only eye witnesses were a border collie puppy and a police officer. Since that time Flash has grown from a puppy into a vital part of the Dogleg Island Police Department, and has lived happily with the two people who rescued him on that horrible night: Deputy Sheriff Ryan Grady and Police Chief Aggie Malone.

Now the trial of the century is about to begin. The defendant, accused of slaughtering his parents in their beach home, maintains his innocence. Aggie and Ryan, the top witnesses for the prosecution, are convinced he is lying. But only Flash knows the truth.

And with another murder to solve, a tangle of conflicting evidence to sort out, and a brutal storm on the way, the truth may come too late… for all of them. (Goodreads)

First off, I have to say that every book I have read by this author has been fantastic.  And Flash was no different.  It has everything I look for when reading a mystery: exceptional characters, great setting, superb mystery and intense suspense.

The characters are well developed, well rounded and three dimensional.  Aggie is a strong woman who has been through a lot.  She does not want to admit anything scares her, but she has fears like everyone does.  She has a lot of problems to deal with, both mentally and physically, but she nevers give up.  Ryan is a hard worker who is loyal to his friends, especially Aggie.  They get along well and even when they argued, you could tell they really care about each other.  They make a good pair and I enjoyed getting to know them and spend time with them. But Flash was my favorite character in the book.  He was smart, loyal and loving.  He seems to know what Aggie is feeling and thinking at all times.  He knows his number one job is to keep her happy and safe.  I really enjoyed that he has a point of view in this book and I knew what he was thinking.  You can tell that the author has a special bond with dogs, it was evident throughout the whole story.

The author is very talented in her descriptive writing and through much of the book, I felt like I was right there, watching all the action taking place around me.  I felt like could hop on a plane and go visit Dogleg Island (but I want to make sure the weather is okay).  Her description of the hurricane had me listening for the emergency sirens to start blaring.

The writing style flows smoothly and the book is a quick easy read.  The mystery is carried on well throughout the book and it was difficult to solve.  I liked the way a crime from the past was connected with a present day crime.  There were enough suspects to consider and enough clues thrown in that even the most experienced armchair detective would have difficulty figuring it out.  The suspense kept building and building and I was nervous turning the pages because of what might happen.

I would recommend this book to anyone who enjoys a well crafted mystery.  The combination of great characters, a great setting and a great mystery makes this book a must read.