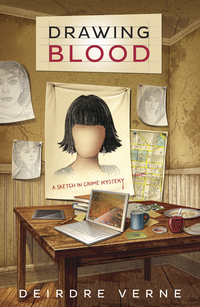 CeCe Prentice returns with her band of Dumpster-diving pals in this fast-paced mystery that puts the eco-friendly heroine back on top–of a pile of trash.

When Big Bob, manager of the town dump, goes missing, CeCe is worried about more than where she’ll score her next salvaged car. First at the scene when Bob’s body is recovered from under the weekly recycling haul, CeCe is quick to identify potential witnesses and provide crucial scene sketches. But when CeCe is uncharacteristically startled by an unidentified woman at Bob’s abandoned house, her artistic talents are challenged, and her drawings, much to her frustration, come up short.

With CeCe’s observational talents on the fritz, Detective Frank DeRosa, CeCe, and her network of Freegans are forced to recreate Big Bob’s life from the garbage up. The team is soon thrust into the underworld of recycling where what appears to be junk could actually be the clue that saves a life. (Goodreads)

The characters are well developed and well rounded.  CeCe is a character that had to grow on me, but she did eventually.  Given her background, I am surprised that she turned out as normal as she did.  I have to say that CeCe’s life history is so convoluted that it was was not very realistic.  Her dumpster diving friends added a lot to the story.  I was fascinated by the “Freegan” lifestyle.  I could not live like that but it was interesting reading about it.

The mystery is carried on well throughout the whole book.  There were enough suspects to consider and clues to sift through to make solving this nearly impossible.   Throw in a few red herrings and  even the most experienced armchair detective would have trouble with.    There were a lot of twists and turns that added to the suspense.

I would recommend this book to anyone who enjoys a well crafted cozy mystery.  It is not your typical cozy, but that is not a bad thing.

I received a free copy of this book from NetGalley in exchange for a honest review.  I would like to thank NetGalley and Midnight Ink for the opportunity to read and review this book.