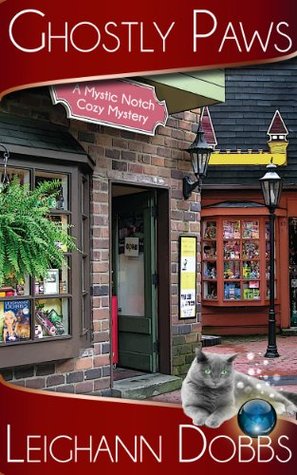 Middle age can be murder …

At least that’s how it seems to former crime journalist, Wilhelmina Chance, whose near-fatal accident has given her a strange side effect … she sees ghosts.

After a messy divorce sends her fleeing back to her hometown of Mystic Notch, nestled in the White Mountains of New Hampshire, Willa finds herself haunted by the tenacious ghost of the town librarian who insists Willa solve her murder.

Luckily, she has lots of help, including a quirky cast of small-town characters, the cat she’s inherited from her grandmother, and her best friend, Pepper, who claims her herbal teas can work magic.

But just when Willa thinks she’s discovered who the killer is, she finds out that things are not what they seem in Mystic Notch, and the case takes a strange turn that has Willa adding even some of her long-time friends to her suspect list.

Can Willa find the real killer in time to keep the magical balance in Mystic Notch on the side of good, or will evil prevail? (Goodreads)

The characters are well developed and well rounded.  Willa is someone who is not afraid of hard work.  Although she is older than most protagonists in cozy mysteries, much of the time she did not act like she was older.  She really did not appear to have much experience with men.  And although she was a crime journalist at one time in her career, she did not quickly pick up on clues.  She did not even think to look for the murder weapon.  She just did not seem that realistic to me.  I liked her but I really did not believe her.

I enjoyed the paranormal aspects to this book.  I really like ghost cozy and this one was pretty good.  I just wish that there were more interactions between Willa and Lavinia, the ghost that has asked Willa for help.  I did enjoy all of the mystical cats and how they worked together to help Willa solve the mystery.

The writing style flows smoothly and the book is an easy read.  The author is very talented in her descriptive writing and  through much of the book, I felt like I was right there, watching the activity going on around me.  I enjoyed the enchanting setting of Mystic Notch and would love to go and visit sometime.  The mystery was carried on well throughout the book and I did not figure out the killer until it was revealed at the end.

I would recommend this book to those readers who enjoy paranormal cozies.  If you like mystical cats and a mystical setting, then give this book a try.  I will definitely read the other books in the series.