Here is a list of some of the new releases for the week of June 4th, 2017.  Since there were so very many books this week, I am going to divide them between the next four days. Here is the fourth and final day of my list for this week.  Hope you find some selections for your weekly reading. Enjoy and happy reading. 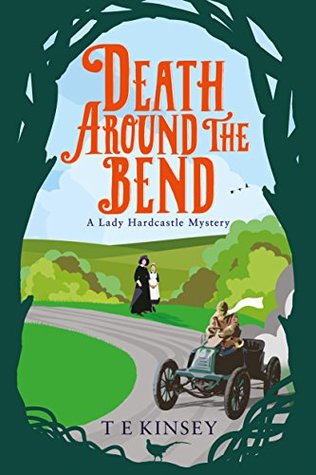 When Lady Hardcastle and her maid, Florence, are invited to Lord Riddlethorpe’s country estate for a week of motor racing and parties, they both agree it sounds like a perfectly charming holiday. But when one of the drivers dies in a crash during the very first race, they discover that what seemed like an uncharacteristic error in judgement may have a more sinister explanation . . .

Closer investigation reveals that the driver’s car was sabotaged – and the driver murdered. The local constabulary are quick to dismiss the case, but Flo and Lady Hardcastle are determined to find out just who has committed this dastardly act, and why.

As the pair begin to make enquiries of Lord Riddlethorpe’s servants and guests, it seems that, below stairs and above, there is more to this case than meets the eye. And, even in the quiet of the countryside, death is always just around the bend.  (Goodreads) 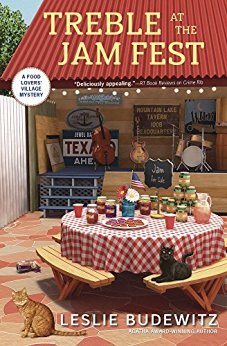 Erin Murphy, manager of Murphy’s Mercantile (aka the Merc), is tuning up for Jewel Bay’s annual Jazz Festival. Between keeping the Merc’s shelves stocked with Montana’s tastiest local fare and hosting the festival’s kick-off concert, Erin has her hands full.

Discord erupts when jazz guitarist Gerry Martin is found dead on the rocks above the Jewel River. The one-time international sensation had fallen out of sync with festival organizers, students, and performers. Was his death an accident—or did someone even the score?

Despite the warning signs to not get involved, Erin investigates. And when the killer attacks, she orchestrates her efforts into one last crescendo, hoping to avoid a deadly finale. (Goodreads) 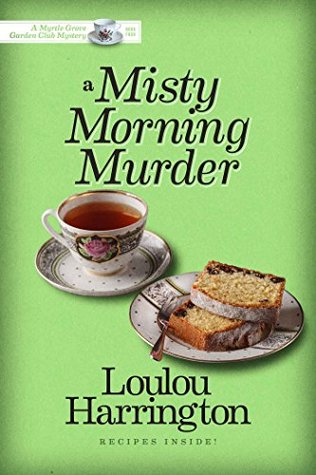 Just as Jesse Camden is ready to shake herself out of her romantic rut and take a giant step forward with Sheriff Joe Tyler, a dead ex-fiance reaches out to yank her two steps back.

Misty Bennett, seventeen-year-old daughter of Jesse’s former beau Ronald Bennett, is the closest thing to a daughter of her own that Jesse has ever had. So when Misty flees from her father’s overbearing bride-to-be and travels across two states to arrive on Jesse’s doorstep, Jesse takes the girl in. And when the fiancée herself shows up demanding the girl’s return, Jesse sends the woman packing and vows to keep Misty safe until her father comes for her.

But when Ronnie Bennett’s body is found just miles from Myrtle Grove, Jesse is left to unravel the mystery of his murder and help gather the shattered pieces of his daughter’s life. (Goodreads) 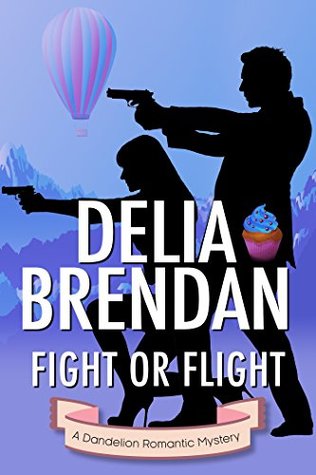 When Pearl Waterman’s husband disappeared several years ago, everyone secretly suspected the hot air balloonist faked his own death to escape the cupcake baker. On Christmas, his balloon is discovered in the mountains leading Pearl to renew her efforts to find him.

As Dandelion Police Sergeant Nina Markov tries to keep one step ahead of the baker, the stakes in her own relationship with FBI Special Agent Michael Hanson are rising. The formerly confirmed bachelor was starting to adjust to the idea of marriage and Nina’s six-year-old son. What will happen when he learns that he’s the father to a very special baby? Will he fight for their relationship or will he take flight?  (Goodreads) 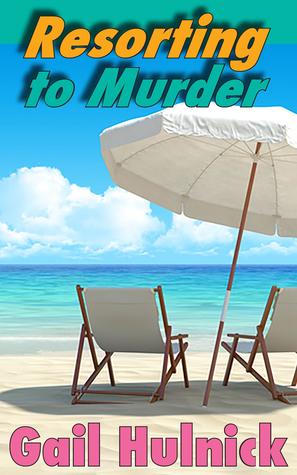 Resorting to Murder is the first book in The Hotels Mystery Series.
It’s a perfect, sparkling, turquoise morning on St. Croix, that jewel of an island in the Caribbean. The palms are swaying and the rum is running sweet. But the taste in guest services director Nola Stewart’s mouth is distinctly sour. Two new guests – the rst, quiet, intriguing, the other, loud and obnoxious – have just checked in. Together they’re turning the beach, the pool and the weekly Pirates’ Feast into a four-alarm food fiasco. Then, as one of them turns the heat at the annual KweeZeenArtZ chef competition up to a high rolling boil it would seem that murder is on the menu.  (Goodreads) 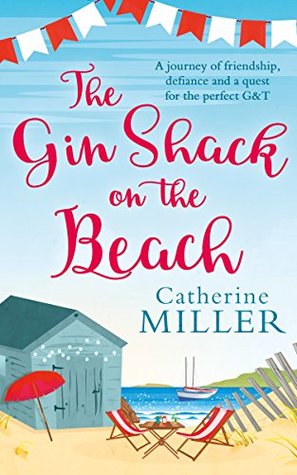 You’re never too old to try something new!

When octogenarian Olive Turner is persuaded by her son to move into a retirement home, she congratulates herself on finding the secret to an easy life: no washing up, cooking or cleaning. But Olive isn’t one for mindless bingo with her fellow residents, and before the first day is over she’s already hatching a plan to escape back to her beloved beach hut and indulge in her secret passion for a very good gin & tonic.

Before long Olive’s secret is out and turning into something wonderful and new. Only a select few are invited, but word spreads quickly about the weekly meetings of The Gin Shack Club. Soon everybody on the beach wants to become a gin connoisseur and join Olive on her journey to never being forced to grow older than you feel.

A journey of friendship, defiance and a quest for the perfect G&T.  (Goodreads) 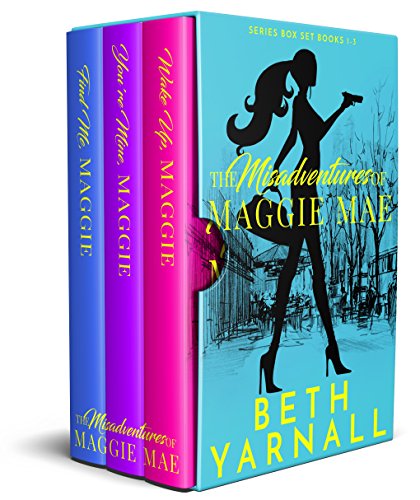 The Misadventures of Maggie Mae Boxed Set
Capture the hilarious antics of Maggie Mae Castro and FBI Special Agent Clive Poole in one special omnibus edition of The Misadventures of Maggie Mae.
Includes the first 3 books in the series:
Wake Up, Maggie
Maggie is the only witness to an Arizona state senator’s death. Can Clive keep her safe and keep his hands off the hot body he’s been charged to guard?
You’re Mine, Maggie
Someone is sending Maggie strange anonymous gifts with the note You’re Mine, Maggie. When her secret admirer proves his affection for Maggie by killing her coworker Maggie and Clive work together to find a killer who will do anything to have Maggie. Anything.
Find Me, Maggie
Maggie’s twin brother is missing and it’s up to Maggie to find him. Maggie strikes a deal with the mob boss Miguel conned—if she brings Miguel back, her brother lives, if the man’s henchmen get their hands on him first, all bets are off and Maggie could end up an only child.   (Amazon) 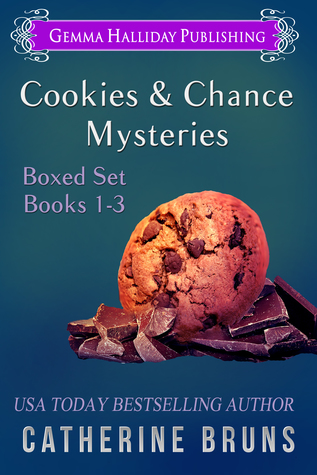 Tastes Like Murder
Sally Muccio’s had her crosses to bear: a cheating ex-boyfriend, crazy Italian parents, and an unfaithful husband, just to name a few. After her divorce, she returns to her hometown to start a novelty cookie shop whose specialties include original fortune cookies, served with a sprinkle of foreshadowing. But there’s no warning when her ex-husband’s mistress drops dead on Sal’s porch!

Baked to Death
Baker turned reluctant amateur sleuth, Sally Muccio’s, finally found the happiness that’s eluded her for years. But when Sal’s ex-husband winds up dead and her new boyfriend is arrested for the crime, everything begins to crumble.

Burned to a Crisp
Just when things appear to be going well for baker and sometime sleuth, Sally Muccio, life turns up the heat again. When the bakery Sal’s worked so hard for goes up in smoke—along with her dreams!—she’s not sure how much more she can stand. Even worse…a man is found dead in the bakery’s back room, and now it’s up to Sal to find out why.  (Goodreads)