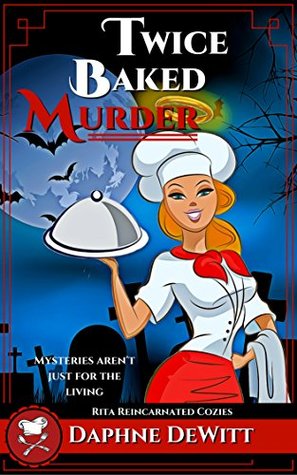 Rita never thought much about how she was going to die.

Two months prior to her wedding, pie maker extraordinaire and sheriff’s daughter Rita Clarke is rudely pushed down a flight of stairs by an unseen man with a burly voice and meaty hands. And that was the last thing that ever happened to her.

Two years after her untimely demise, Rita returns to her small town of Second Springs with a brand new body, a dusty red pickup truck, a guardian angel named Charlie, an aloof Irish setter that used to be the mayor, and a mission to solve a string of murders (including her own) before she can move on.

But things in Second Springs aren’t what they used to be. Rita’s fiancé is now engaged to her former best friend, her father has been outed as town sheriff, and his replacement is irritatingly cocky and sure that Rita is hiding something.

When a young man is murdered on Rita’s first night back, she finds a wrench at the scene of the crime; the same thing she saw before her own murder.

Now Rita must try to work through the craziness of her new life, coexist with her ex friend and fiancé, and dodge the ever encroaching eye of the new sheriff if she’s going to stand a chance of catching the person responsible and moving on.

And you thought death was the end of all the fun!   (Goodreads)

Rita is a bright and spunky woman who just happens to be dead due to murder.  Not only is she dead, but she has been reincarnated into a new person, body and all.  She has returned from the dead to finish some unfinished business.  Only problem is that she does not know what the unfinished business is.  And she cannot tell anyone what happened to her, and she cannot let others know that she knows the town, and she cannot let anyone know that she already knows them.  And right after she shows up in town, someone is murdered and the sheriff likes her for the crime.  She is in a real predicament and does not quite know what to do about it.

The characters are well developed and well rounded.  Rita is one strong woman and she can handle just about anything.  Which is a good thing for her, seeing as how she finds herself in a situation that defies logic.  I enjoyed getting to know Rita and learning more about her.  I enjoyed her interactions with all the citizens of Second Springs, including her best friend Peggy and her fiance Aiden.  And I also greatly enjoyed the bickering and banter between Darrin, the new sheriff, and her.

The writing style flows smoothly and the book is an easy read.  The author is very talented in her descriptive writing and through much of the book, I felt like I was right there watching all the action taking place and listening in on conversations.  She really nailed the small town setting and all the gossiping and nosiness that goes along with it.

The mysteries were carried on well throughout the entire book.  There were actually three different mysteries to solve, two from the past and one in the present.  There were enough suspects to consider and clues to sift through that it was nearly impossible to figure out the culprit.

I would highly recommend this book for anyone who enjoys a well crafted cozy.  This book has everything I look for in a cozy: great characters, small town setting, humor, suspense and mystery.  And as an added bonus, paranormal.  Do yourself a favor and pick up this book to read.  I cannot wait for the next book in the series.