Here is a list of some Thanksgiving themed books for you to check out.  Hope you find some to enjoy.  Happy Thanksgiving reading. 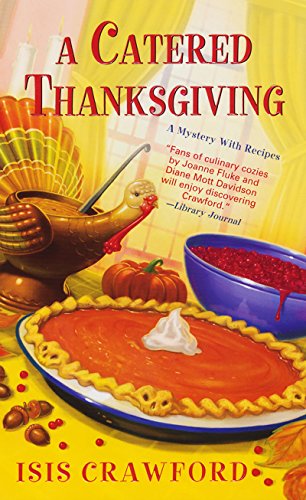 Whipping up Thanksgiving dinner can be stressful for anyone, but that goes double for the Field family. Everything has to be perfect, or they risk getting cut out of dominating patriarch Monty’s lucrative will. That’s where sisters Bernie and Libby’s catering company, A Little Taste of Heaven, comes in. Surely with their lumpless mashed potatoes and to-die-for gravy, even the super-dysfunctional Fields can get along for one meal. But no one can dress up disaster when the turkey goes boom right in Monty’s scowling face, sending him to that great dining room in the sky.

With everyone harboring their own cornucopia of secrets, discovering who wanted to carve up Monty won’t be easy. Worse, the Field Mansion is draped under a snowstorm, trapping them with a killer determined to get more than his piece of the pie. Bernie and Libby will have to find out who the culprit is, fast, before the leftovers–and their chances of surviving–run out for good. . .

“Spritely. . . The action builds to more fireworks and a dramatic rescue.” —Publishers Weekly

“This will please Crawford’s old fans and bring in new ones.” —RT Book Reviews 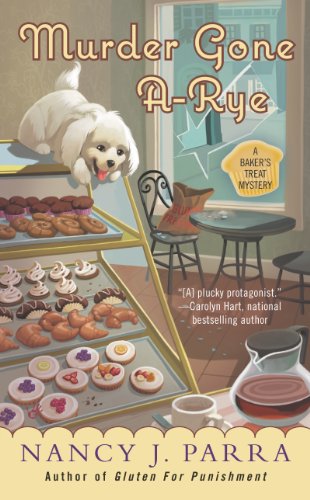 Toni Holmes is the best gluten-free baker in Oiltop, Kansas—okay, she’s the only one—but when her grandmother becomes a murder suspect, she’s more concerned with keeping Grandma free…

When Toni’s beloved—and eccentric—grandma Ruth is arrested for the murder of her archenemy, Lois Striker, it’s time for a senior moment of truth. Telltale tracks from a scooter like the one Grandma Ruth rides lead the police to suspect the outspoken oldster, but Toni knows her grandmother wouldn’t burn a cookie, let alone extinguish a life.

In fact, the case has Grandma more revved up than her infamous scooter. A former investigative journalist, she decides to solve the murder herself—with help from Toni—by digging up long-buried town secrets. But as Grandma scoots in where others fear to tread, Toni needs to make sure she not only stays out of jail but out of harm’s way… 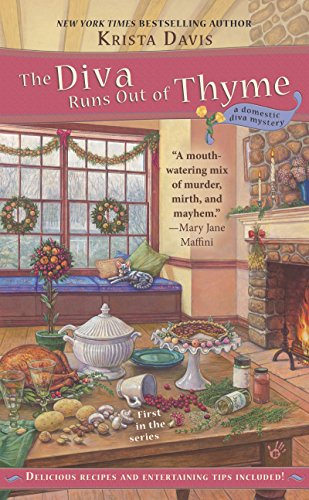 FIRST IN THE SERIES!

Few can compete with local celebrity Natasha Smith when it comes to entertaining, but Sophie Winston is determined to try. Her childhood rival may have stolen the spotlight—and her husband—but this Thanksgiving Sophie is determined to rob Natasha of the prize for Alexandria, Virginia’s Stupendous Stuffing Shakedown. She just needs the right ingredient.

But Sophie’s search for the perfect turkey takes a basting when she stumbles across a corpse. And when the police find her name and photo inside the victim’s car, Sophie will have to set her trussing aside to solve the murder—or she’ll be serving up prison grub… 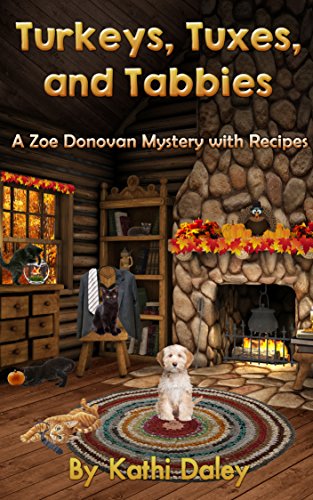 When the cat lady of Ashton Falls is found dead in her home just days before Thanksgiving, Zoe must track down a killer while dealing with a house full of socialites who have come to Ashton Falls to bid on Zak in a high class bachelor auction.  (Amazon) 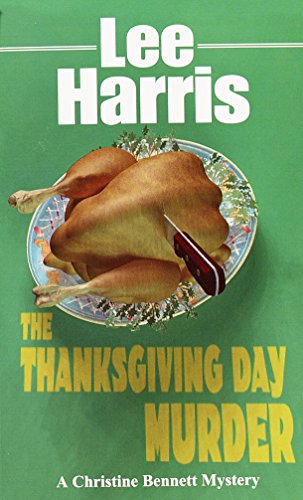 A CELEBRATION OF ABUNDANCE BECOMES A DAY OF LOSS.
More than a year ago Natalie Gordon went to buy a balloon at the Thanksgiving Day Parade and dissolved into thin air. The police and a private investigator still have no leads. So when Natalie’s despairing husband pleads with ex-nun Christine Bennett to help, she can’t say no.
Not only are Natalie’s present whereabouts a mystery, but so is her past. Someone has stripped her personnel file in her old office. Even her husband knows strangely little about her.
Starting with a cardboard box of Natalie’s belongings–a few books, keys, some cosmetics–Chris searches for a life someone has tried very hard to erase and finds a cast of characters so chilling that murder seems not only inevitable but likely to happen again. . . .  (Amazon) 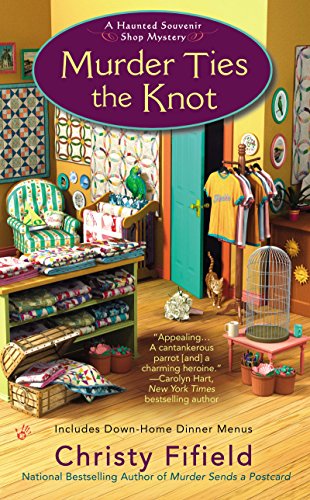 A Haunted Souvenir Shop Mystery from the author of Murder Sends a Postcard–featuring Down-Home Dinner Menus.

It’s winter in Keyhole Bay, Florida, and while the tourist trade is slow, souvenir shop owner Glory Martine is busy with her best friend’s wedding. But between managing preparations, the bride’s in-laws, and a haunted parrot named Bluebeard, Glory makes plans to catch a killer.

As her friends Karen and Riley approach their wedding day, Glory could use a break from the nuptial madness. She takes a peaceful drive to Alabama’s piney woods to pick up the wedding quilt she ordered from a supplier. But the supplier, Beth, has disappeared along with the quilt and her husband, Everett.

Glory learns that two men were found murdered near Beth and Everett’s home and that the couple is wanted for questioning. Believing they are innocent, Glory convinces them to cooperate with authorities. But when they’re thrown in jail, Glory vows to catch the real killer before one happy couple walks down the aisle and another gets sent up the river.  (Amazon) 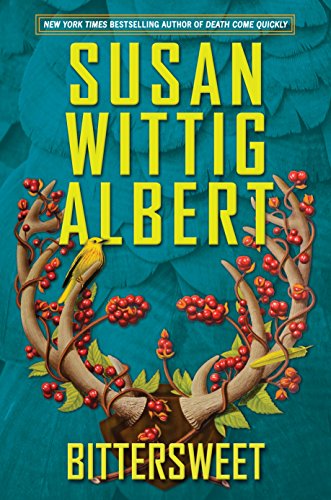 New from the author of Death Come Quickly and Widow’s Tears
This Thanksgiving, be grateful for China Bayles—who teams up with an old friend to solve a complex case of theft and murder in a South Texas ranching community…

It’s Thanksgiving in Pecan Springs, and China is planning to visit her mother, Leatha, and her mother’s husband, Sam, who are enthusiastically embarking on a new enterprise—turning their former game ranch into a vacation retreat for birders. She’s also looking forward to catching up with her friend, game warden Mackenzie “Mack” Chambers, who was recently transferred to the area. But Leatha calls with bad news: Sam has had a heart attack.

How will Leatha manage if Sam can’t carry his share? She does have a helper, Sue Ellen Krause. But China discovers that Sue Ellen, who is in the process of leaving her marriage to the assistant foreman at a large trophy game ranch, is in some serious trouble. Before Sue Ellen can tell China the full story, her car veers off a deserted road and she is killed.

Meanwhile, when a local veterinarian is shot in what appears to be a burglary at his clinic, Mack Chambers believes his murder could be related to fawns stolen from a nearby ranch. As Mack follows the trail, China begins to wonder if Sue Ellen’s death may not have been an accident, and if there’s a connection to the stolen animals. But their search for the truth may put their own lives in danger…

From the Hardcover edition.  (Amazon)

Leaving the Hillside manor in capable hands, bed-and-breakfast hostess Judith McMonigle heads north to Vancouver’s Hotel Clovia with her irrepressibly voracious cousin Renie for a pre-Thanksgiving getaway. But when an addled and impoverished popcorn vendor is murdered — along with his foul-mouthed pet parakeet — a local copper’s suspicious gaze settles on the two visiting Americans. The cousins, in turn, suspect one of the “Sacred Eight” — an odd-duck assortment of glamorous showbiz glitterati currently gathered at the historic hotel. And unless Judith and Renie can pluck a killer from the secretive, star-studded group, their geese will be thoroughly cooked in short order!  (Amazon)

FIRST IN A NEW SERIES!

The annual pre-Thanksgiving pancake-eating contest is a big event in Sugar Grove, New Hampshire. It’s sponsored by the Sap Bucket Brigade, aka the firefighters auxiliary, and the Greene family farm provides the syrup. But when obnoxious outsider Alanza Speedwell flops face first into a stack of flapjacks during the contest, Greener Pastures’ syrup falls under suspicion.

Dani knows the police—including her ex-boyfriend—are barking up the wrong tree, and she’s determined to pull her loved ones out of a very sticky situation. The odds may be stacked against her, but she’s got to tap the real killer before some poor sap in her own family ends up trading the sugar house for the Big House…(Amazon)

The sixteenth book in Melanie Jackson’s bestselling Chloe Boston Mystery Series is a short collection of 5 holiday short stories. In “Mystery in the Footlights” someone is trying to sabotage the Hope Falls Halloween production of Macbeth. Fortunately Chloe is working on constructing the sets so she is available to apprehend the villian. In “Over the River” Chloe and Alex must battle the local wildlife for their dinner when they decide to celebrate Thanksgiving in an aunt’s remote cabin in the woods. In “The Dentist” Chloe has to make an emergency visit to the dentist to fix a cracked molar. While in the dentist’s chair she uncovers a mystery which could endanger more than her dental work. In “A Christmas without Carol” Chloe, Alex, and her parents spend Christmas with Chloe’s uncle who is recently widowed. Through three encounters, past, present, and future, he learns the meaning of Christmas and changes his life forever. In “For Whom the Bells Toll” Chloe and Alex spend New Years Eve solving a mystery in a secluded castle which has been redecorated for charity. Come spend the holidays with Chloe this year. You’ll be happy you did.  (Amazon)

FIRST IN A NEW SERIES!

Search and rescue expert Gracie Kinkaid risks her life on a daily basis to save strangers. But going up against a coldhearted murderer is one kind of danger she’s not prepared for…

As a volunteer for Timber Creek Search and Rescue, missing out on holiday festivities is nothing new to Gracie. After all, disasters don’t stop happening because of a cooked turkey. So when Gracie is called out on Thanksgiving for four hikers missing in the wilderness of Southern California, she packs up her gear and heads out to find them.

The mission quickly goes from routine to deadly. An early season blizzard sets in. The one missing person the team does find, famous actor Rob Christian, remembers being attacked by someone else on the trail, someone trying to kill him. And Gracie’s partner leaves to get backup, taking the radio—their only link to the outside world—with him.

Alone in the mountains, Gracie will have to use all her expertise to keep Rob alive. But with an unknown killer lurking somewhere in the dark, even that might not be enough to save them…  (Amazon)

After solving one case of corporate crime, Sedona expected to get her peaceful life back. Problem: She is still a manager at Strandfrost, and there is still rampant jealousy over her promotion. Is the danger of being railroaded by her not-so-illustrious colleagues worse than taking a new undercover job from Steve Huntington? Crooks are coming out of the woodwork and family troubles are stewing. Sedona needs to keep her sanity intact, piece together mismatched clues and dodge more than one stray bullet. If she can manage all of that, maybe she’ll have time to figure out whether her love life stands a chance.  (Amazon)