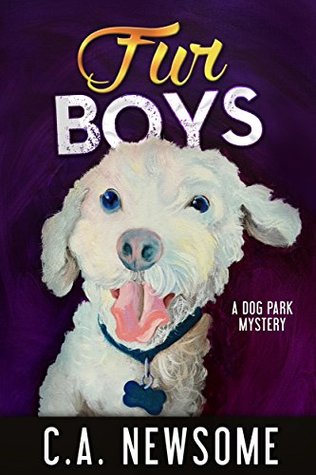 When a Machiavellian voice professor has his school in a stranglehold, Who doesn’t want to silence him?

Meet Buddy, Dasher, and Rory, three adoring fur boys often in the care of Hannah, the ever-efficient admin at Hopewell Music Academy, site of Lia’s latest mural commission. Hannah can juggle anything the academy tosses at her, except the voice professor who owns the fur boys and whose demoralizing and career-crushing ways are the dark underbelly of the prestigious academy.

When Lia and Peter trip over the the professor’s corpse, it’s impossible to find someone who doesn‘t want him dead. Good thing it’s not Peter’s case. Or it wouldn’t be, if not for a mysterious informant determined to drag him in. With Peter hamstrung by departmental politics, it’s time for Lia and the dog park gang step in.  (Goodreads)

The characters are well developed and well rounded.  Lia is a smart spunky woman and she is not afraid to stick her nose into trouble, especially if it is to helps solve a murder. With Peter’s help, (her boyfriend) that is exactly what she does.  I enjoyed getting to know them, as well as Cynth and Brent.  I also enjoyed spending time with the people from the dog park and all of their animals.  All the characters in the book are people you would want to be friends.

The author is very talented in her descriptive writing and through much of the book I felt like I was right there watching all of the action taking place and listening in on conversations.  The writing style flows smoothly and the book is an easy read.

The mystery was carried on well throughout the entire book and well plotted.  With a lot of suspects to consider, numerous clues to sift through and a few red herrings thrown in, it was difficult to figure out who the real culprit was.

I would recommend this book to anyone who enjoys a well crafted cozy mystery, and if you like dogs in your cozy, you’ll enjoy it even more.  I read the first couple books of this series a while ago, I now have some catching up to do.