I’m so excited to be a stop on the blog tour for author T. C. LoTempio and her new book, Death By A Whisker.  This is the second book in this great series.

Death by a Whisker: A Cat Rescue Mystery 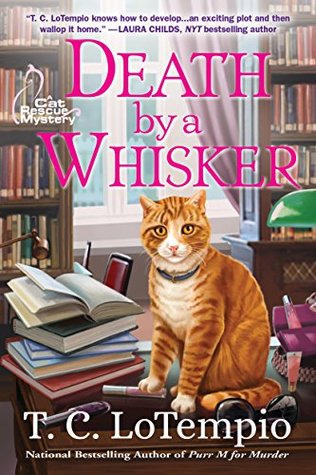 Getting used to life back home in Deer Park, North Carolina, Sydney McCall and her right-hand tabby, Toby, are helping her sister Kat run the local animal shelter. Syd and Kat are all excited about the prospect of the shelter’s newest fundraiser: shopping channel queen Ulla Townsend. Shelter admin Maggie Shayne vehemently refuses to have anything to do with the woman, but the fundraiser ensues as planned. That is, until Ulla turns up dead in the middle of the event.

The cause of death is determined to be an allergic reaction, but Syd and Toby are sniffing out something fishy. When Syd met Ulla, it was clear she was distasteful and rude. And right before the event, Syd spotted some behind-the-scenes drama between Ulla and her manager. As they begin to investigate, they realize there is no shortage of suspects, and Maggie is at the top of the list.

Now Syd and Toby must claw their way to the truth before everything goes paws up at their animal shelter in Death by a Whisker by national bestselling author T. C. LoTempio. (Goodreads)

The characters are well developed and well rounded.  Sydney is a likable, hard working woman.  She gets along well with her sister, Kat, and all of the other workers at the animal shelter.  Her roommate Leila is an investigative reporter and they make a good team when it comes to sleuthing.   And that is exactly what they will have to do when another dead body turns up.  Toby, her rescue cat, is also very helpful when it comes to solving crimes.  All of the characters and secondary characters were engaging and I was happy to be able to visit with them again.

The writing style flows smoothly and the book is an easy read.  The author is very talented in her descriptive writing and I felt like I was right there, involved in the story personally.  The community that she has created, Deer Park, North Carolina, is a place I would definitely like to visit.

The mystery was well plotted and moved along at a nice pace.  There were enough suspects to consider and clues to sift through, and enough twists and turns that it was not an easy mystery to solve.

I would recommend this well crafted cozy mystery to anyone who likes animals with their mysteries.  The characters are great, the setting is great, the mystery is great and the book is great.  I am already looking forward to the next book in the series.

I received a copy of this book from NetGalley in the hopes of receiving a honest review.  I would like to thank NetGalley and Crooked Lane Books for the opportunity to read and review this great book. 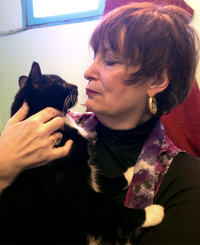 Born in New York City, T. C. LoTempio is the national bestselling author of Meow If It’s Murder, the first in the Nick and Nora Mystery series.

She has been a staff reporter at the young adult magazine Susabella Passengers and Friends for more than a decade.

While Toni LoTempio does not commit – or solve – murders in real life, she has no trouble doing it on paper.

Her lifelong love of mysteries began early on when she was introduced to her first Nancy Drew mystery at age 10 – The Secret in the Old Attic. She lists among her favorite mystery/suspense writers Erle Stanley Gardner, Mary Higgins Clark and James Patterson, as well as EJ Copperman, Steve Hockensmith, Victoria Laurie, Ali Brandon, Rita Mae Brown, Miranda James and Sofie Kelly to name only a few!

Toni is also passionate about her love for animals, as demonstrated with her four cats: Trixie, Princess, Maxx and, of course, ROCCO, who not only provided the inspiration for the character of Nick the cat in the Nick and Nora mystery series, but who also writes his own blog and does charity work for Nathan Fillion’s charity, Kids Need to Read!

Toni’s also devoted to miniseries like The Thorn Birds, Dancing with the Stars, reruns of Murder She Wrote and Castle (of course!).

She (and ROCCO, albeit he’s uncredited) pen the Nick and Nora mystery series from Berkley Prime Crime. There is a Rafflecopter Giveaway for this tour.  Please follow this link to enter the giveaway.

February 22 – Escape With Dollycas Into A Good Book – REVIEW