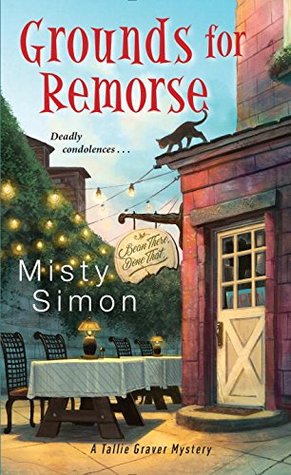 Best friends Tallie Graver and Gina Laudermilch both seem to spend a lot of time around urns. For Tallie, they’re part and parcel of the family business, Graver’s Funeral Home. Even though she’s traded ashes for dusting with her own cleaning business, she still works part-time for her folks and lives above the funeral parlor. For Gina, they’re the vessels that contain her heavenly brew at her coffee shop, Bean There, Done That. And both women are learning that owning a business can make finding time for romance challenging.

But when Gina’s new beau turns out to have a wife, who barges into the coffee shop to take him home, she can’t contain her bitterness and loudly threatens to poison his cup or boil him in vat of coffee. So when Mr. Wrong turns up dead at the bottom of a staircase inside Gina’s locked home, she finds herself at the top of the police’s suspect list. Tallie needs to sweep in to save her friend. But she’ll need to watch her step, or she may go from being a funeral home employee to becoming their next client . . .(Goodreads)

The characters are well rounded and well developed.  I really liked the friendship between Tallie and Gina, you can tell that they are besties.  When Gina is a suspect in the murder of a guy she was dating, Tallie will do anything to clear Gina’s name.  If I ever get accused of murder, I want Tallie in my corner!!!!!!

The mystery was well plotted and moved along at a steady pace.  There were enough suspects to consider and clues to sift through.  Throw in some red herrings and twists and turns and you have a mystery that is not easy to solve.

I would recommend this book to anyone who enjoys a well crafted cozy.  This is the second book in this series, and the second one that I have read, and I enjoyed them both.

6 thoughts on “Review of Grounds For Remorse”