Murder With A Cherry On Top 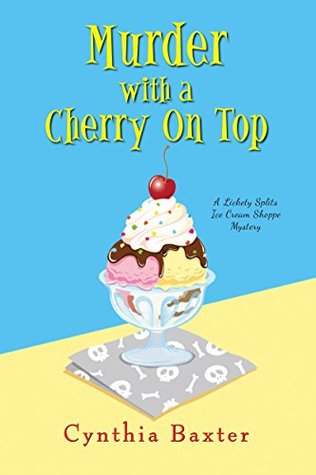 Kate McKay had doubts about swapping her high-powered life in Manhattan for Wolfert’s Roost, the quaint Hudson Valley village where she grew up. But when she moves back to care for her ailing grandmother, Kate decides to start fresh and indulge her dream of running an ice cream shop. All goes smoothly–until she’s reunited with old acquaintances nuttier than a vat of rocky road . . .

Kate should be thrilled about opening Lickety Splits Ice Cream Shoppe in the heart of town. Instead her spirits melt like soft serve in the summer when she learns that her childhood frenemy, Ashley Winthrop, has started selling frozen treats in the bakery across the street. Turns out, Ashley hasn’t sweetened since high school. And, once again, she’s game for some very unfriendly competition . . .

But before Ashley can kill Kate’s new business, someone kills Ashley–stabbing her to death inside the bakery. Worse, the murder occurs right after the two rivals drew crowds with a heated argument, leaving half of Wolfert’s Roost speculating that Kate was finally pushed over the edge . . .

With rumors swirling and her reputation in serious trouble, Kate is determined to get the real scoop on the crime–even if it means joining forces with a former flame. As she pieces together clues to a chilling scandal, Kate soon realizes that she’ll need way more than a sprinkle of wit if she wants to expose the killer and live to see another sundae . . .

The characters are well rounded and well developed.  I really enjoyed getting to meet Kate, her grandma and her niece, Emma.  Kate is a hard working woman who knows what she wants and is not afraid to go for it.  Opening her own ice cream shop is a dream come true for her since she is obsessed with everything ice cream.  And when her rival is found murdered and she is a person of interest, she will become obsessed with finding the culprit, before she’s put into the deep freeze for life.

The author is very talented in her descriptive writing and through much of the book I felt like I was right there watching all of the action taking place.  I almost felt like I could taste all of the wonderful ice cream concoctions that she was serving at Lickety Splits.  I really liked the interesting facts and tidbits that the author included at the beginning of each chapter, as well as the recipes found at the end.

The writing style flows smoothly and the book is an easy read.  The mystery was fast paced and kept me entertained.  There were enough characters to consider and clues to sift through.  Throw in some red herrings along the way and it was not an easy mystery to solve.  I really liked how Kate methodically went through all of the clues and did her snooping without putting herself in very much danger.  The culprit was a surprise to me and I like when I am surprised.

I would recommend this book to anyone who enjoys a well crafted cozy mystery.  I really liked the premise of an ice cream shop owner being the protagonist.  Who does not like ice cream?  I am looking forward to reading more books in the delectable series.