Here is a list of some of the new releases for the week of June 24th, 2018.  I am going to divide the list into 4 days because there are so very many of them this week. Today is the fourth and final day of my list for this week.  Hope you find some selections for your weekly reading. Enjoy and happy reading.

In the latest in this New York Times bestselling series, matrimony and murder collide as San Francisco book-restoration expert Brooklyn Wainwright walks down the aisle…

Brooklyn has it all covered. She’s triple-checked her wedding to-do list, and everything is on track for the upcoming ceremony with the love of her life, security expert Derek Stone.

Not everyone has been as lucky in love as Brooklyn. Her old college roommates Heather and Sara lost touch twelve years ago when Sara stole Heather’s boyfriend. Brooklyn was caught in the middle and hasn’t seen her former besties since their falling-out. When they both show up at her surprise bridal shower, Brooklyn is sure drama will ensue. But she’s touched when the women seem willing to sort out their differences and gift her rare copies of The Three Musketeers and The Red Fairy Book.

Brooklyn’s prewedding calm is shattered when one of her formerly feuding friends is found murdered and Brooklyn determines that one of the rare books is a forgery. She can’t help but wonder if the victim played a part in this fraud, or if she was targeted because she discovered the scam. With a killer and con artist on the loose, Brooklyn and Derek—with the unsolicited help of their meddling mothers—must catch the culprit before their big day turns into a big mess.  (Amazon) 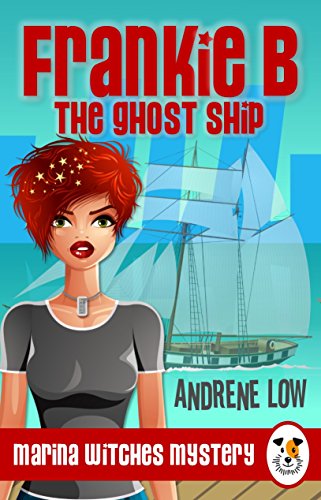 She’s a jinxed witch with Bruce Lee moves. The coven’s being haunted and witches are disappearing. Will she be able to save the coven and herself?

Not yet over the loss of her mom, Frankie B’s in a new city, without family, a home or her full powers. Thank goodness for her familiar, Dex, the best Jack Russell in the world.

They’re faced with moving into a flea-pit motel, when Dex spots a vacancy at a nearby marina. But this is no ordinary marina, and before they’ve even had time to finish unpacking, life takes a deadly turn.

Will Frankie solve the mystery of the missing witches and rid the coven of the ghost of Captain Russell Garnet? Or will her ability to make him corporeal see her being held as his prisoner until her dying breath? Either way, she’s not going down without a fight.

Claim your piece of magic by getting a copy today.  (Amazon) 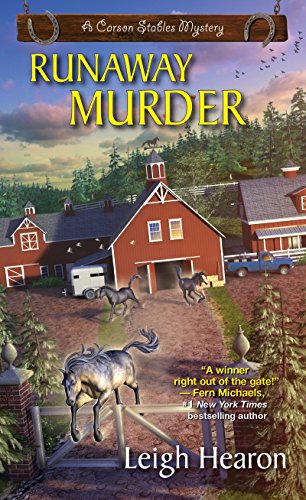 Breaking free from her mounting responsibilities on the Olympic Peninsula, Carson Stables owner Annie Carson reluctantly swaps muddy jeans for breeches to attend a dressage event in Southern California. But after settling into elegant digs at a historic mansion, she finds herself surrounded by palace intrigue, backbiting riders, and cold-blooded murder. As Annie makes heads or tails of clues scattered around the show ring, she must figure out which of her new acquaintances is a killer—before the crazed culprit takes the reins . . .

“Here’s a new heroine after my own heart. Plan to stay up all night with this one because this mystery is a winner right out of the gate!” —Fern Michaels, #1 New York Times bestselling author on Reining in Murder

“Leigh Hearon seems destined for high marks with what is shaping up to be a delightful new series in the mystery genre.” —Colorado Daily News on Reining in Murder

“This murder mystery will be enjoyed by anyone who likes chewing hay and wearing riding boots.” —Fresh Fiction on Reining in Murder

“The action-packed scenes are stellar, as well as the descriptions of the gorgeous and dangerous Washington wilderness. This third in the series presents a unique heroine, one whose devotion to horses is as admirable as her wit and intelligence.” —Kings River Life Magazine on Unbridled Murder  (Amazon) 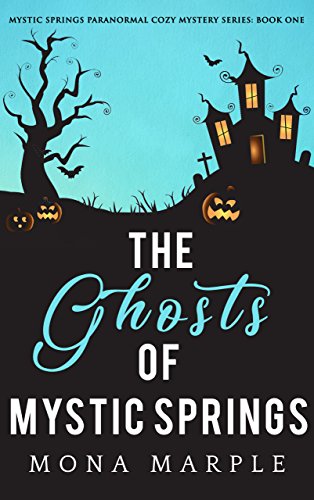 Why be normal when you can be paranormal?

Welcome to Mystic Springs, where things definitely go bump in the night.

As the town’s medium, Connie Winters is the only person who can see the ghosts who call Mystic Springs home.

When young temptress Lola is killed, the dead Mayor and the dead Sheriff are determined to investigate, and since they’ve never been replaced, they’d better get on with it. But they need Connie’s help. And if Connie’s helping, her sister Sage is going to get involved too – she’s beautiful, slim, and twenty years dead.

It may be the first time in history that a murder-solving squad is a mixture of real live people and real dead ghosts. Connie, and the residents of Mystic Springs, will be forced to question everything they thought they knew.

This is a full-length paranormal cozy mystery. Spooky not scary. Lighthearted and fun. 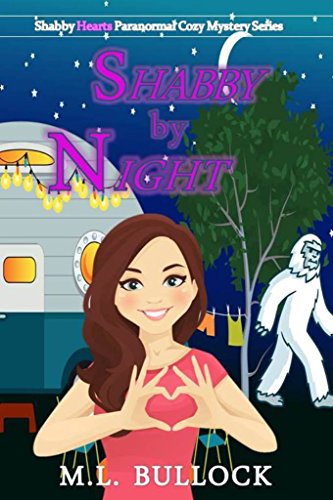 There’s nothing like a good curse to bring the Shabeaux family together.

Aunt Mavis is determined to break the Wolfsbane Curse off Arcadia but in the meantime, the owner of the Shabby Hearts Trailer Park has to learn how to live with her new irresistible qualities. That means keeping both Cyrus and Armand at bay during the full moon; which proves difficult for more than one reason.

Tiffany decides to renew her pageant aspirations while Kitty does everything she can to sabotage her.

When a member of a bigfoot research team disappears, Arcadia faces off with an unxpected beast and comes to a shocking conclusion. 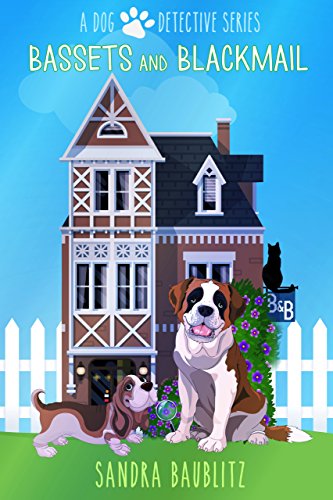 Will this mystery game be murder?
Peaceful Dreams B&B is hosting a murder mystery game to celebrate its grand opening. Local sleuth Clarissa Hayes and her loyal Saint Bernard, Paw, have joined in the entertainment.
All is fun and games until one of the guests is found dead at the bottom of the basement stairs. Was it an accident? Or murder? Did the victim share a secret past with one of the guests or the B&B owners?
It’s up to Clarissa and Paw to trail the clues to find out the truth. Along the way they’re joined by a bevy of friends, both human and animal, including a black cat who is embroiled in a mystery of his own.
Will peaceful dreams reign or will the killer unleash nightmares for all?

This is the 2nd novel in A Dog Detective Series. Mastiffs, Mystery, and Murder was the first novel.  (Amazon) 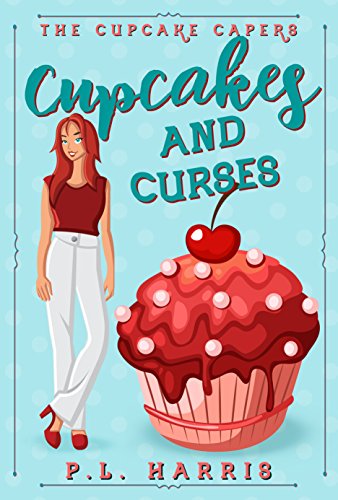 Murder and cupcakes, a deadly mix.

Clair McCorrson has spent the last three years building her business. CC’s Simply Cupcakes with her sister gaining a reputation for mouth-watering excellence in their seaside town of Ashton Point. While Charlotte is the master baker, Clair keeps the business side looking sweet and if everything goes as planned, she’ll be more than the girl behind the scenes.

Expanding their business to the nearby town of Watson’s Creek is Clair’s idea, and acquiring the Sweets Mansion is her dream come true, her chance to step out from her sister’s shadow and make it on her own. Clair’s excitement quickly turns sour when she stumbles across the murdered body of local settlement agent.

Newspaper headlines screaming Cupcake Killer Strikes Again! Clair’s life seems to be going from bad to worse when rumours of the cursed Mansion begin to surface igniting chaos among the locals. Bodies literally begin to mount up around CC’s Simply Cupcakes and all the evidence points to Clair. Wrongly accused of murder, it’s a race against time to find the real culprit before she’s spends the rest of her life behind bars.

This is Book 2 in The Cupcake Capers Series and may contain elements of humour, drama and danger. However, it will definitely not contain any of the following potentially lethal substances:
Swearing or profanity.
Gore or graphic scenes.
Cliff-hangers or unsolved endings.  (Amazon) 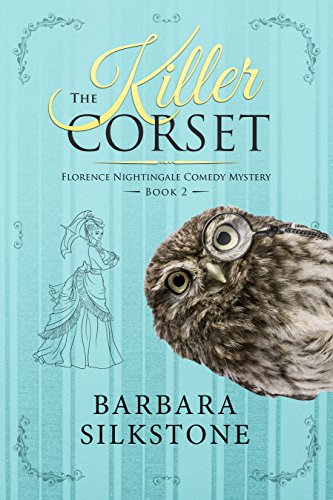 When a Buckingham Palace lady-in-waiting is killed, Poppy Throckmorten is up to her crinolines helping her mentor, Florence Nightingale, solve the murder. But in tracking the clues, they uncover a plot to kill Queen Victoria herself!

Poppy must use all the detective skills she’s learned from Florence to foil the villains before the young monarch’s first meeting with her future husband, Prince Albert. This is a Clean and Wholesome read sweetened with chuckles and snark. Book 2 in the Florence Nightingale Comedy Mystery series.

~*~
“Barbara Silkstone is beyond clever. She’s an engaging writer who, with great skill, manages to make her skewed world ring true. The best thing about her characters is that they are not caricatures; they are real with all their dimensions intact. The best thing about Silkstone is that she manages to exhibit equal measures of talent and imagination.” 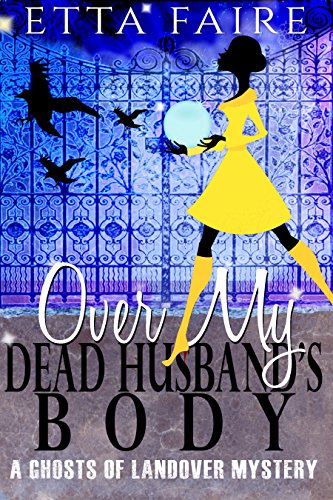 A free house and a dead ex-husband? That’s like winning the Powerball

Carly Taylor swore she’d never go back to Potter Grove. That cesspool of a small town always seemed to be teeming with gossip, and most of it was about her and her lying, drunken, rich husband who hung out at strip clubs and cheated on her. But that was four years ago. And now, that jerk is dead.

It’s the reason Carly’s finally heading back. Her ex-husband left her his house when he died, and Carly figures you’d have to be some sort of stupid to pass up a free house. It’s like winning the Lotto, especially when it involves a dead ex too. But the town seems different to her now, like something is off. And it’s not just the fact there’s a murderer on the loose and women are missing.

As soon as Carly signs the paperwork on the spooky Victorian, she finds out her Lotto win has a catch. And it’s an annoying, snotty one. Her dead ex-husband is haunting her free house. He wants her to solve his murder, which Carly is in no hurry to do, until the missing women are tied to her ex’s death and figuring out his case takes on a new level of urgency.

But just like a free house, nothing is ever as safe as it seems, especially when you’re forced to solve crimes with your dead ex-husband.  (Amazon) 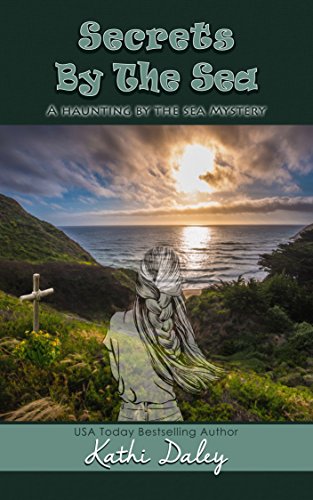 Amanda Parker has returned to the small seaside town where she lived for two years while in witness protection. Now that she has settled in and solved the murder she returned home to solve, she has decided to stay in Cutter’s Cove for an extended vacation. Of course it isn’t long before she stumbles across a surprising secret that will require the help of the entire gang to solve.

Mac has returned to her job in California, but has promised to return as soon as she can wrap things up at work. Mom and Tucker are due to arrive for a visit in just a few days, and Trevor has indicated that he is ready and willing to do what it takes to help Amanda and her ghostly sidekick Alyson, figure out who killed the young woman buried on the bluff.   (Amazon)