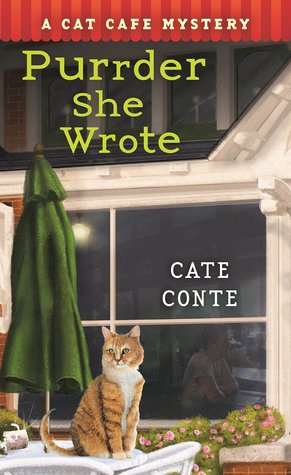 It’s the grand opening of Daybreak Island’s cat café, where customers can get cozy with an assortment of friendly felines—and maybe even take one or a few home. Co-owner Maddie James is purring with excitement over her new warm-and-fuzzy venture. . .until she becomes entangled in a petty drama between one of her volunteers, an ardent animal-rights activist, and a wealthy woman who insists on adopting a calico kitty—right this instant. The catfight that ensues is bad enough for business. But when the snubbed socialite is found dead with a tell-tale catnip toy on the scene, suspicion lands squarely on Maddie’s staffer. Now, with her reputation and her career prospects on the line (to say nothing of her budding romance with a handsome pet groomer) Maddie must do whatever it takes to solve the crime—before her nine lives are up. (Goodreads)

The author is very talented in her descriptive writing and through much of the book I felt like I was right there, watching all of the action taking place in the cat cafe.  I could see all of the cats lounging in their cat apartments and in all of the nooks and crannies. The writing style allowed me to get a real feel for the characters through their words and actions.

The characters are well rounded and well developed.  Maddie is smart, caring and loyal. She does not like the fact that one of her volunteers is being accused of murder or the fact that her brother-in-law might somehow be involved.  She is very willing and able to snoop around to find the killer. I enjoyed reading about her relationships with her family. She and her sister have some issues but they just may be able to work them out. And the relationship she has with her grandfather, Leo, is very special. Lucas seems like a great boyfriend and we will see how that progresses in the coming books. And J J, the cat is a star.

The mystery is well plotted and moved along at a steady pace.  There are enough clues to sift through and suspects to consider and it is not easy to solve.  I did not figure it out until the reveal at the end of the book, which is fine with me.

I would recommend this book to anyone who enjoys a well crafted cozy mystery.  Both of the books in this series are really great and I am looking forward to the third book.

I voluntarily reviewed an ARC of this book provided by the publisher, St. Martin’s Press, and NetGalley, which I greatly appreciate.