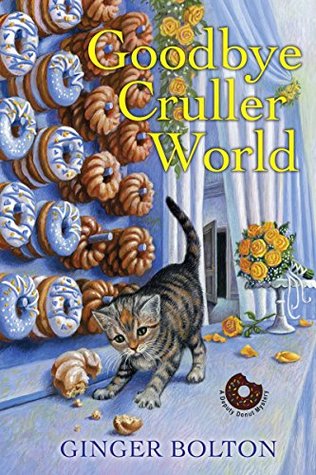 Named after her beloved tabby, Deputy Donut, Emily Westhill’s donut shop in small-town Fallingbrook, Wisconsin, is doing so well, she’s expanding into catering weddings. But a killer is about to crash the reception . . .

Normally, Emily’s eyes tend to glaze over when prospective brides go on about their wedding plans. But when the owner of the clothing shop, Dressed to Kill, asks Emily to design a donut wall for her reception, she’s immediately sweet on the idea. With the help of her father-in-law and business partner–the former police chief of Fallingbrook–she hangs the treats from dowels on the wall so guests can help themselves.

But that night, when the groom ends up on the floor with signs of poisoning, Emily suspects someone has tampered with her treats. When the groom dies, there’s no way to sugarcoat it: she’s got a murder on her hands. Despite a list of suspects as long as the guest list, Emily vows to find out who created the killer confection to save her shop’s reputation and keep the bride out of handcuffs. She’ll have to move fast . . . before the poisoner takes a powder.  (Goodreads)

The characters are well rounded and well developed.  Emily is not afraid of hard work and she is happy to spend her days working to make her donut shop successful,  So when she has the opportunity to create a donut wall for a wedding reception, she is happy to do it. Little does she know that her creation is going to be used for murder.  She knows that she is going to have to get involved in another killer investigation and figure out who the culprit is. With the help of some friends, she does just that.

The mystery was well plotted and moved along at a nice pace.  There were enough clues to sift through and suspects to consider.  Throw in some red herrings and twists and turns and it is not very easily solved.   The fact that Emily was considered a suspect seemed a little off to me, she did not know him at all.   I guess the fact that the lead detective really dislikes Emily (I think she dislikes everyone) was the reason why she wanted to pin the murder on Emily.