Here is a list of some of the new releases for the week of September 9th, 2018. I am going to divide the list into 3 days because there are so  many of them for this week. Today is the third day of my list for this week. Hope you find some selections for your weekly reading. Enjoy and happy reading 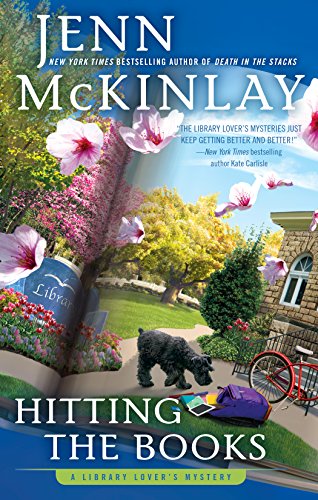 t’s murder by the book in the latest hit Library Lover’s mystery from the New York Timesbestselling author of Death in the Stacks.

When a stack of library materials is found at the scene of a hit and run, library director Lindsey Norris finds herself dragged into the investigation as the police try to link the driver of the stolen car to the person who borrowed the books. Before Lindsey can delve into the library’s records, the victim of the hit and run, Theresa Houston, suffers another “accident” and the investigation shifts from driver negligence to attempted homicide.

A clue surfaces in the confiscated library materials that could crack open the case and it is up to Lindsey to piece it all together. But things are not as they seem in the sleepy town of Briar Creek and when the driver of the stolen car turns up dead, Lindsey, her staff and her library friends have to hit the books before the murderer gets the last word…  (Amazon) 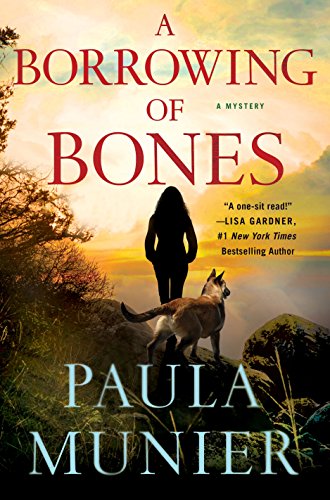 The first in a gripping new series by Paula Munier, A Borrowing of Bones is full of complex twists, introducing a wonderful new voice for mystery readers and dog lovers.

Grief and guilt are the ghosts that haunt you when you survive what others do not….

After their last deployment, when she got shot, her fiancé Martinez got killed and his bomb-sniffing dog Elvis got depressed, soldier Mercy Carr and Elvis were both sent home, her late lover’s last words ringing in her ears: “Take care of my partner.”

Together the two former military police—one twenty-nine-year-old two-legged female with wounds deeper than skin and one handsome five-year-old four-legged Malinois with canine PTSD—march off their grief mile after mile in the beautiful remote Vermont wilderness.

Even on the Fourth of July weekend, when all of Northshire celebrates with fun and frolic and fireworks, it’s just another walk in the woods for Mercy and Elvis—until the dog alerts to explosives and they find a squalling baby abandoned near a shallow grave filled with what appear to be human bones.

U.S. Game Warden Troy Warner and his search and rescue Newfoundland Susie Bear respond to Mercy’s 911 call, and the four must work together to track down a missing mother, solve a cold-case murder, and keep the citizens of Northshire safe on potentially the most incendiary Independence Day since the American Revolution.

It’s a call to action Mercy and Elvis cannot ignore, no matter what the cost.  (Amazon) 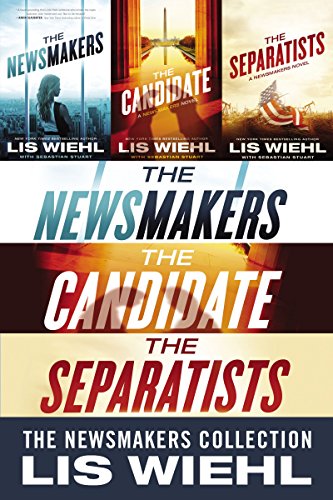 TV reporter Erica Sparks has become a superstar overnight. Is it due to her hard work and talent, or is she at the center of a spiraling conspiracy?

On her very first assignment, Erica inadvertently witnesses—and films—a horrific tragedy, scooping all the other networks. Mere weeks later, another tragedy strikes—again, right in front of Erica and her cameras.

Erica will stop at nothing to uncover the truth. But she has to make sure disaster—and her troubled past—don’t catch up with her first.

How far will a candidate go to become president? Erica Sparks—America’s top-rated cable-news host—is about to find out.

Mike Ortiz is a dynamic war hero favored to win the White House. Standing by his side is his glamorous and adoring wife, Celeste. But something about this seemingly perfect couple troubles Erica.

The Candidate is packed with political intrigue and media manipulation as the lust for power turns deadly indeed.

After getting the green light from her network to launch an investigative news show, Erica flies to Bismarck, North Dakota, to investigate Take Back Our Homeland, the largest secessionist group. What she finds is profoundly disturbing—a growing threat to the future of our union.

Then she discovers a potential informant murdered in her Bismarck hotel. Take Back Our Homeland might be even more dangerous than she had thought—and she’s unwittingly become one of the key players in the story. Her fear and anxiety escalate—for her marriage, her daughter, and her own life.  (Amazon) 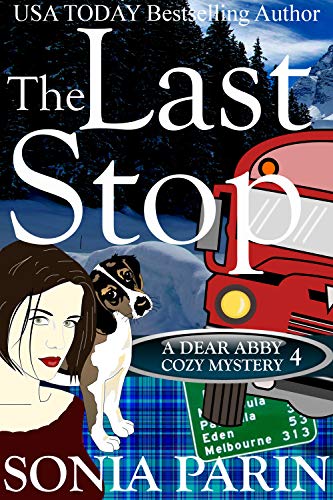 Abby Maguire’s Iowa based travel phobic mom is coming to visit… virtually. Abby will give her the grand tour via a video link to prove Eden is a safe town. All goes well until her mom joins a tour group and one of her fellow passengers dies. There’s enough circumstantial evidence to warrant looking into the death and while Abby’s focus is on keeping her mom in the dark, it doesn’t take long for her mom to suspect Mr. Howington is not just camera shy, but is in fact dead. 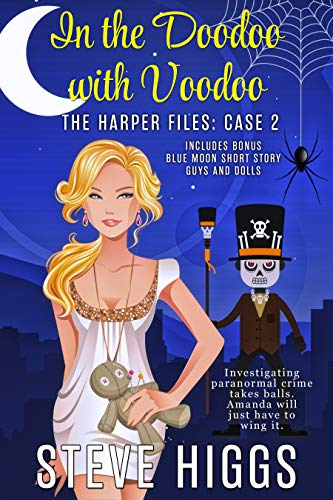 Paranormal investigation takes balls. Amanda will just have to wing it then.

What was she thinking? Quitting her steady job in the Police for an uncertain future at a paranormal investigation agency?
No time to dwell on it though as she has a new client with a surprising problem – Kimberly Kousins has been cursed by a voodoo priest.

Determined to prove to herself, her former Chief Inspector (whom she loathes) and everyone else, that she is a capable woman with no need for a man to rescue her, she is going to have to bend the day to her will.

But voodoo nonsense isn’t the only thing distracting her. After several dates with hot, athletic, superrich Brett Barker, they still haven’t made it into bed. Is that normal? Is he waiting for her to make the first move? Her new boss has inexplicably taken the week off without warning, leaving her to run the business and his best friend, the six-foot-seven-inch, handsome, muscular Benjamin Winters AKA Big Ben is being very clear about what he wants to do with her.

You can be certain that nothing will go as planned in this mayhem-filled, madcap cozy mystery.  (Amazon) 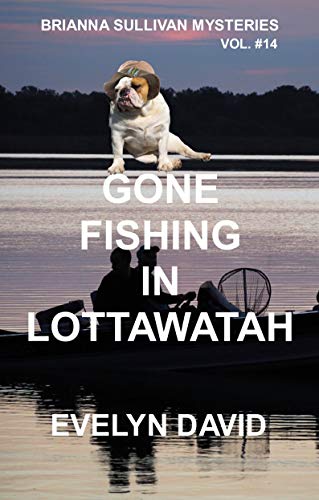 Has pregnancy affected Brianna’s psychic abilities? When Doc Myers, her mother’s boyfriend, who also happens to be Brianna’s boss, is kidnapped, and a respected member of the community turns up dead, this medium doesn’t have a clue. It’s hard to fight crime when you’re fighting 24/7 morning sickness. With ghosts only talking in riddles, Brianna must rely on old-fashioned sleuthing and her intuition to find Doc and stop the murders.

GONE FISHING IN LOTTAWATAH is the fourteenth book in the Brianna Sullivan mystery series. Join Brianna, Cooper, Beverly, Julia, and of course, Leon, her adorable bulldog with the wonky digestive tract, on a roller coaster of a mystery ride, full of thrills, chills, and yes even romance.  (Amazon) 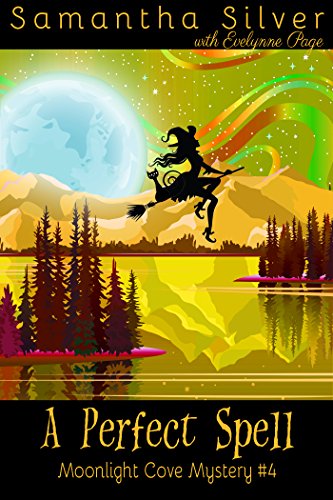 When another body turns up in Moonlight Cove, Arti finds herself giving Xander a helping hand in finding the killer once again.

But between the murder investigation, a literal catfight at home as Luna and Lucy learn to live together, and her mother’s secret new hobby, Arti finds she’s once again bitten off more than she can chew.

And why has Arti’s magic suddenly seemed to go on the fritz?

With more questions than answers, will Arti be able to solve the mystery – and her other problems – before it’s too late?  (Amazon) 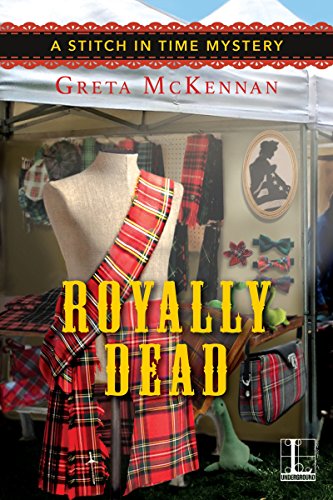 A seamstress who specializes in historical detail, Daria Dembrowski is happy to welcome the Highland Games to town—it’s all fun and games until someone gets “kilt.”

Daria’s roommate, Aileen, plays guitar in a metal band, but one of her bandmates is branching out musically and asks Daria to craft a kilt for an upcoming bagpipe competition. The locals in Laurel Springs, Pennsylvania, are really looking forward to the Highland Games, and the Scottish regalia needs to be just right.

Then one of the athletes collapses during the event, a victim of poisoned whiskey. As suspicion spreads and the police turn their attention to Aileen, Daria vows not to let the real killer get off scot-free . . .  (Amazon) 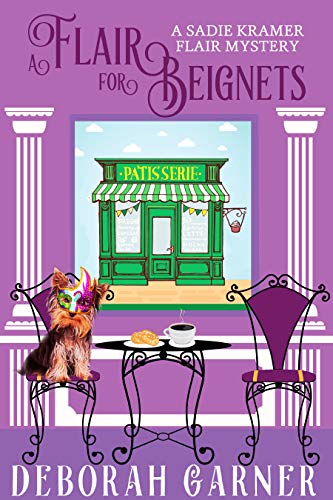 When Sadie Kramer heads to New Orleans with her sidekick Yorkie, Coco, her sole expectation is a spectacular vacation. With fabulous music, exquisite cuisine, and rich culture, how could a week in The Big Easy be anything less than fantastic? And it is – until a customer at popular Chez Lisette Patisserie drops dead face-first in a raspberry-almond tart.

A competitive bakery, a newly-formed friendship, and even Hotel Arnaud-LeBlanc’s luxurious accommodations offer possible suspects. As Sadie sorts through a gumbo of interconnected characters, will she discover who the killer is? Or will the killer discover her first?  (Amazon) 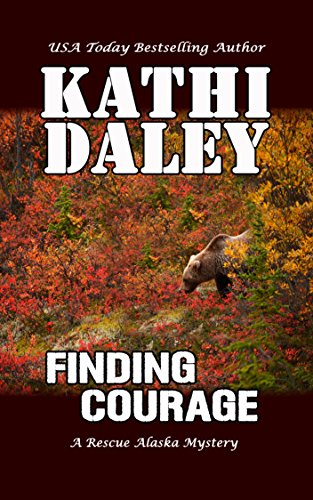 His pulse quickened as they approached. He’d waited so long. Too long. He closed his eyes and reveled in the memory, which did not come as a gentle wave, but as a surge of agony from the depths of his personal hell. He’d craved the searing pain, the deeply felt anguish. It was only during these moments, when he was sure that he would drown in a river of grief, that he felt truly alive.

Harmony’s life is thrown into turmoil after she shares a memory with the madman responsible for the death of a popular member of the Rescue Alaska Search and Rescue Team. She knows she must overcome her fear and grief in order to track down the man, who has threatened the safety of the entire community.

Rescue Alaska is the eighth series by USA Today Bestselling Author Kathi Daley. It is a fast moving mystery series with a paranormal twist which takes place in a small town in northern Alaska where visitors come to hike and ski. Harmony Carson is a lifelong resident who volunteers as a member of the local search and rescue team. Harmony has a unique gift which she often considers a curse. She is able to ‘see’ the individuals she is meant to help rescue, and more often than not she can feel their fear and their pain as well. When she isn’t aiding in a rescue, Harmony works at Neverland – the bar owned by her brother in law Jake, and volunteers at the local animal shelter. Harmony lives in a rustic cabin with six dogs, four cats, six kittens, eight rabbits, and a blind mule named Homer.  (Amazon)