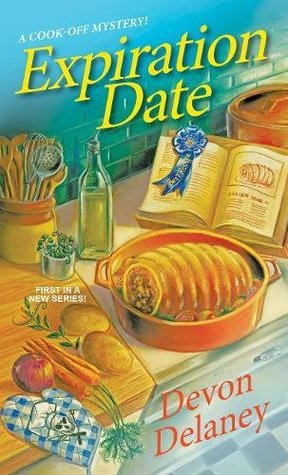 After a short-lived marriage, Sherry Frazzelle is living single life to the fullest in her little Connecticut town, accompanied by her Jack Russell terrier, Chutney. Her new passion is competitive cooking–but it turns out that murder is the surprise ingredient . . .

With contestants from Maine to California and a ten-thousand-dollar prize at stake, Sherry’s latest competition, hosted by the CEO of an organic food company, is sure to be heated. But she’s more than ready to step up to the stove. After all, she did win the award for Most Creative Cupcake back in high-school.Today, she’s hoping her flavorful pork tenderloin will sway the judges. Instead, it seems someone’s decided to slay one of the judges . . .

After Chef Birns falls face first into the Seafood Flatbread Pizza, Sherry’s dish is deemed suspicious. Now she’ll have to stir through a stew of rule-breaking, corruption, and gossip to get herself off the chopping block, and find out who turned this food fight fatal . . .

There seemed to be a lot of characters introduced in this story, probably because it was the first one in the series.  At times I had a little trouble keeping them all straight in my mind, (that is only my opinion and others may not agree with me).  I did like how much Sherry loved cooking and how passionate she was about it. She knew her food and she found something that she could excel at.  She did seem to have a lot of hang-ups but that made her seem more realistic to me. She was not perfect but who among us is.

I really liked the premise of the mystery: a cooking competition.  I thought that was a unique concept and very interesting. It was great having an inside look at cooking competitions and learning a little bit about what goes on.

The writing style flowed smoothly and for the most part it was a quick easy read.  Some of the conversations between the characters did not feel realistic to me. There was a lot of food descriptions and talk of food and sometimes I felt like I was reading a cookbook (I just feel that this was a little over done).  The mystery had a lot of twists and turns as well as enough clues to sift through and suspects to consider. I did figure out the killer before it was revealed but that is alright.

I am planning on reading the next book in this series because I feel there is a strong potential for a great series.  As a debut book, I thought it was good start and I am glad that I read it.

If you enjoy food cozies I think you should give this book a try and see what you think.

2 thoughts on “Review of Expiration Date”