Here is a list of some of the new releases for the week of November 18th, 2018. I am going to divide the list into 4 days because there are so very many of them for this week. Today is the third day of my list for this week. Hope you find some selections for your weekly reading. Enjoy and happy reading. 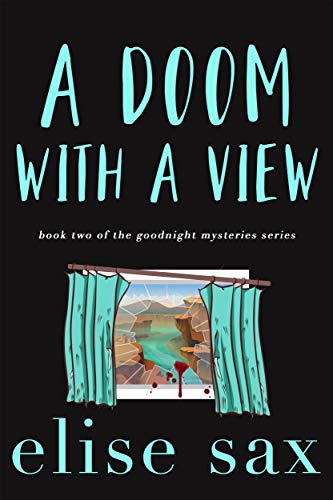 Matilda Dare still can’t sleep. Since she’s arrived in Goodnight, New Mexico, she’s solved one murder and had more than one conversation with a dead woman. Obsessed with finding the woman’s killer, she has to put that on hold when her newspaper receives a mysterious, coded letter. When the author of the letter winds up dead, Matilda is thrust into a mystery that puts her new friends into danger. The hunky Sheriff Goodnight and Matilda’s hunky roommate Boone are along for the ride in this funny action adventure that might end up spelling lights out for Matilda.

A Doom with a View is the second installment in the small town mystery romance Goodnight Mysteries series and a spinoff of the Matchmaker Mysteries. Goodnight…Sometimes sweet dreams end in murder.

“Fans of laugh-out-loud romantic suspense will enjoy this new author as she joins the ranks of Janet Evanovich, Katie MacAllister, and Jennifer Crusie.”—Booklist, on An Affair to Dismember  (Amazon) 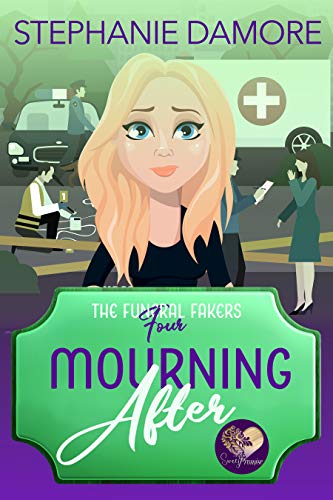 Restrained Crying: $50
Banshee Wailing: $100
Crying & Rolling on the Ground: $150
Threatening to Jump in the Grave: $250
Uncovering a Murder Mystery: PRICELESS

Aspiring stage actress Maven Mackenzie tried to take a bite out of the Big Apple… and choked. Returning from NYC with her head down and ego shattered, she had no idea what to do next. Until the Funeral Fakers find her and offer her a role as a Professional Mourner. It isn’t the best gig she’s ever gone after, but, hey, it’s something.
Her boring new life goes from 0 to 60, however, when a family friend winds up murdered. Now finding the killer lands squarely on Maven’s unprepared shoulders.

But when the deceased was a real pistol, and everyone in town seems to have a motive, the killer could be anyone–and they could strike again at any moment.

Can Maven uncover all the right clues to solve Asheville’s latest funeral fiasco? Find out whodunit in this hilarious mystery series filled with fake tears and a very real body count… Order your copy and start reading today!

Mourning After is book four in The Funeral Fakers series. Each book stands completely on its own, but you’ll have more fun if you read them all together!  (Amazon) 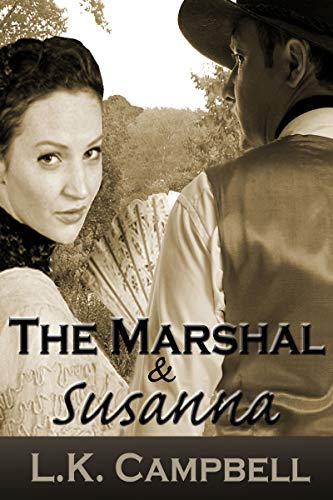 Needing a fresh start, Stanley Washburn and his daughter, Susanna leave Philadelphia for Red Gorge, Dakota Territory. Stanley’s nephew, Jared Hopkins has arranged for his uncle to purchase The Lucky Seven saloon, but Susanna isn’t sold on life in Red Gorge. When the town’s banker, Percy Benjamin is murdered, her family is caught in the middle of the ensuing investigation. In the sheriff’s absence, the new U.S. Territorial Marshal, Seth Davis is called in to handle the case. Susanna has been attracted to Seth since they met on the stagecoach coming into town, but her attraction might not last long when Jared becomes Seth’s prime suspect.  (Amazon) 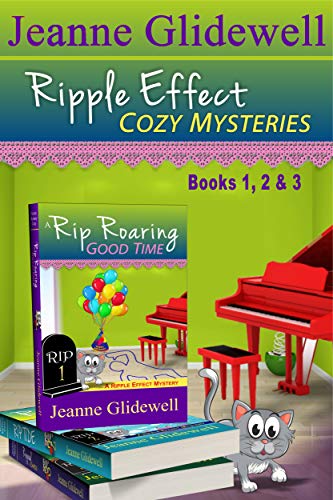 “In a world that views aging and senior citizens as obsolete, it is refreshing to read The Ripple Effect Cozy Mystery series by Jeanne Glidewell.” ~Cindy Travis, Reviewer

BOOK 1: A RIP ROARING GOOD TIME – Senior citizens and full-time RVers, Rip and Rapella Ripple, are headed to Rockdale, Missouri, in their old travel trailer (aka The Chartreuse Caboose) to attend a friend’s surprise birthday party. But surprise quickly turns to shock when a party guest is found murdered and Lexie Starr, a friend of the Ripples, is hauled off to jail as suspect number one. Determined to exonerate Lexie, the Ripples put the Chartreuse Caboose in park and their investigating tactics in drive. But more than a simple frame-up is afoot when the victim’s stepfather, who is also the local Police Chief, ignores the Ripple’s findings.

BOOK 2: RIP TIDE – Rip and Rapella Ripple are spending the holidays with daughter Regina, in their hometown of Rockport, TX. When Regina’s new husband, Milo Moore, becomes a suspect in an off-shore harpooning homicide, the Ripples set out to exonerate him. But proving Milo didn’t harpoon his best friend and business partner, Cooper Claypool—with Claypool’s spear-gun while out poaching red snapper in the Gulf of Mexico—is more challenging than the Ripples anticipated.

BOOK 3: RIPPED TO SHREDS – Visiting Wyoming’s Rest ‘n Peace RV Park, senior citizens and full-time RVers Rip and Rapella Ripple are intent on winning a wildlife photo contest. But while trying to snap the perfect nature photo, Rapella’s game camera captures the truth behind the RV park owner’s mysterious death. Now Rip and Rapella are knee-deep in their own investigation, and on the trail of poachers illegally trapping bears in the Bighorn National Forest.

“It is not often a book makes me laugh aloud but Jeanne Glidewell never disappoints . . .”~Yvonne P., Reviewer

“I hope this series continues. Being Rip and Rapellas’ age I am happy to see them featured in adventures. I can recommend this book to anyone who likes mysteries, cozy or not.” ~Anna, Reviewer

THE LEXIE STARR MYSTERIES, in series order
Leave No Stone Unturned
The Extinguished Guest
Haunted
With This Ring
Just Ducky
The Spirit of the Season – a holiday novella
Cozy Camping
Marriage & Mayhem  (Amazon) 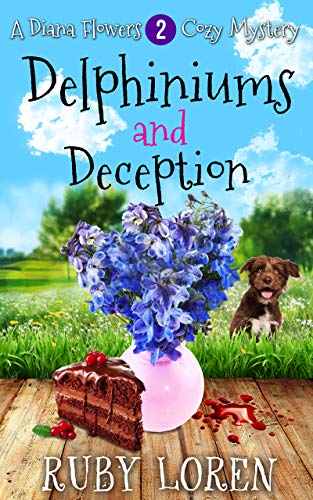 Locked in with a killer.

Arranging flowers is the only way out.

When Fergus tells Diana he’s taking her on a flower arranging retreat for her birthday, she should have been more suspicious.

Especially when he announces that he’s coming with her.

After discovering the whole truth about the retreat, Diana is still considering how to murder Fergus…. when one of their fellow flower arrangers is found dead – stabbed in the back with a mystery weapon.

With the retreat on complete lockdown, Diana and Fergus have a mystery to solve that wasn’t part of the itinerary.

Will they find the killer before the clock runs out?

You’ll love this hilarious British cozy series with its floral inspiration, because everyone loves a comedy crime-fighting duo! 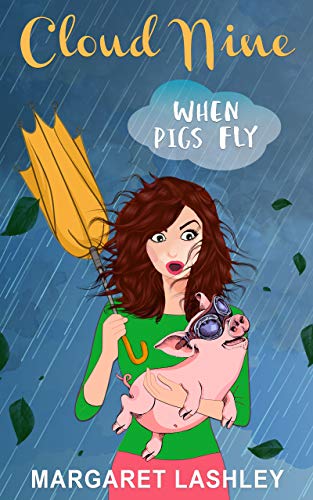 Change happens. Even when it doesn’t make any cents.

Planning for a rainy day has never been Val’s forte. But when a storm brews up right in her own backyard, Val’s forced to get off her lounge chair and spring into action.

A shady, ham-fisted developer’s threatening to knock down Val’s favorite beach haunt, along with all the precious memories held within its shabby walls. With the owner’s signature on the bill of sale, the plan seems like a done deal.

Something fishy’s going on at the beach, and it’s going to take all the wits Val can muster to put a pig-headed developer out to pasture. But with her friend Goober missing in action, can Val get her act – and her troops – together in time to keep Sunset Beach from being wiped off the map?

Sandwiched between ghosts of the past and hopes for the future, Val needs to whip up a miracle if she’s going to save her own bacon….

If you like wacky, deeply flawed characters and laugh-out-loud situations, you’ll love Cloud Nine! It’s the ninth and final book in Margaret Lashley’s hilarious Val Fremden Mystery Series. Order your copy and be prepared to be blown away Thanksgiving Day!

“Hooked like a fish. OMG Margaret Lashley is the best! Val could be Stephanie Plum’s double!! Phenomenal writing.”
“I love this rollicking series. Hilarious, exceedingly well crafted, amazingly quirky characters.”
“The characters and interaction are totally ‘wet your pants laughing’ funny!! Don’t believe me? Grab a copy for yourself and see.”
“If you like Janet Evanovich you will love Margaret Lashley!”
“Deliciously screwball!”
“Not your usual cozy mystery! This is a fantastic series about real people who you can’t help but like and want to read more!”
“Totally madcap and zany.”
“It would be a misfortune to miss this series!”  (Amazon) 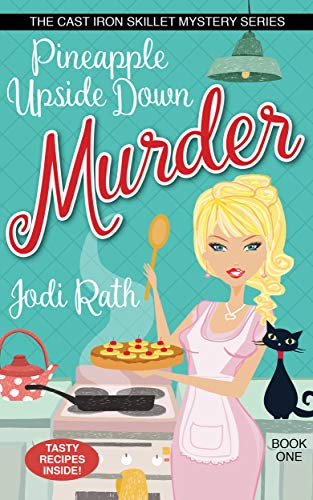 ntroducing Jolie Tucker, an introverted yet passionate restaurant co-owner of Cast Iron Creations, who, at her best friend Ava’s request, steps out of her comfort zone. This leads her into the shade of a killer in the small, cozy village of Leavensport, Ohio. The victim is the village’s beloved Ellie Siler who runs the village sweet spot, Chocolate Capers. Jolie finds her grandma Opal is a prime suspect and goes on a search for answers only to find out that her family’s secret recipes may not belong to the Tucker family at all. Jolie’s job, family, and livelihood are all on the line. The answers are assuredly lethal.  (Amazon) 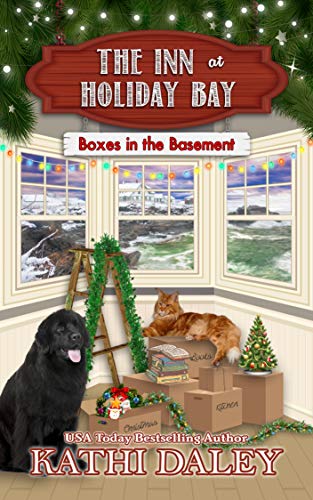 In book 1 of this series, a local girl has been murdered and the small seaside community is up in arms. When Abby finds boxes in the basement of her new home, which seem to provide a clue as to who might have killed the girl, Abby plants herself firmly in the middle of what has turned out to be a complicated investigation. Although Abby isn’t a cop, or even a private detective, she isn’t unfamiliar with the investigative process. As a New York Times Bestselling mystery writer she knows how to conduct research. As the widow of a homicide detective, she knows the questions to ask.

Join Abby, Georgia, Rufus, and Ramos, as they help Officer Colt Wilder track down a killer before kills the next victim in what looks to be a annual spree.  (Amazon)