The Inn At Holiday Bay
Boxes In The Basement, Book #1
Kathi Daley
5+ Stars 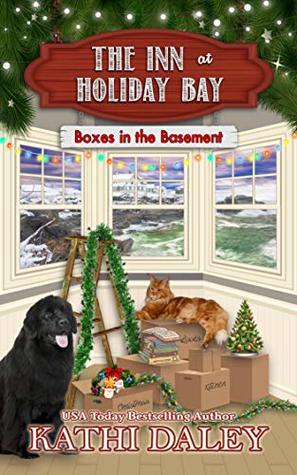 In book 1 of this series, a local girl has been murdered and the small seaside community is up in arms. When Abby finds boxes in the basement of her new home, which seem to provide a clue as to who might have killed the girl, Abby plants herself firmly in the middle of what has turned out to be a complicated investigation. Although Abby isn’t a cop, or even a private detective, she isn’t unfamiliar with the investigative process. As a New York Times Bestselling mystery writer she knows how to conduct research. As the widow of a homicide detective, she knows the questions to ask.

Join Abby, Georgia, Rufus, and Ramos, as they help Officer Colt Wilder track down a killer before kills the next victim in what looks to be a annual spree. (Goodreads)

The characters are well rounded and well developed. Abby has had her share of heartbreak and tragedy, but she is trying to climb out of her sorrow and become whole again. Georgie has also had a rough life but she has not given up. Not only are the two of them becoming friends, they are helping each other rebuild their lives. It made me feel good to see that they have each other. Between the two of them and their animals,Rufus the cat, and Ramos, the gentle giant of a dog, I think they will be okay.

The author is very talented in her descriptive writing and through much of the book, I felt I was right there, seeing the rundown mansion and watching all of the action taking place. The writing style flows smoothly and the book is a quick easy read. The mystery was fast paced and had a few different layers to it.

I would recommend this book to anyone who enjoys a well written cozy mystery. It had a different feel than other cozies, (I think because of Abby’s back story) and I thought it was really good.

2 thoughts on “Review of The Inn At Holiday Bay”