Here is a list of some of the new releases for the week of December 9th, 2018. I am going to divide the list into 4 days because there are so very many of them for this week. Today is the fourth and final day of my list for this week. Hope you find some selections for your weekly reading. Enjoy and happy reading. 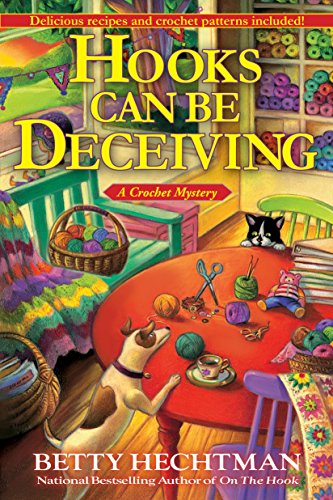 National bestselling author Betty Hechtman brings the Tarzana Hookers to a winning thirteenth installment in the Crochet mysteries. It’s going to get knotty.

The Tarzana Hookers crochet club is ready for its close-up! But Molly Pink may be getting too close to a case that will land her on the cutting-room floor.

Molly Pink’s excitement level is off the hook: The Craftee Channel’s new cable talk show “Creating with Crochet” has scheduled an upcoming taping at the bookstore. While she’s there, TV host Rory Graham is to work with the Tarzana Hookers on a Make and Take bracelet project to draw bookstore customers to the yarn section. It’s a win-win…or so it “seams.”

The situation gets a bit knotted when channel producer Michael Kostner confides to Molly his concern that Rory may have oversold her ability as a crocheter. When the producer’s worst fears are realized, it’s up to Molly to make sure Rory comes through.

Guiding Rory through crocheting-for-beginners will have to wait, though, as Molly suddenly has to untangle the mysterious death of a new Tarzana Hookers member. Marianne Freeman and her live-in companion, Connie Richards, haven’t exactly been gabby since they joined the Hookers, but Connie’s voice is silenced permanently when she is electrocuted while walking on a wet lawn—electrified by an old radio plugged into a faulty extension cord. The fingers point at Marianne, but Molly is fast on the case to protect one of her own. Was Marianne the killer…or the intended target? Why does her younger brother want to keep her from talking to the cops? And why is this whole case starting to remind Molly Pink of an old TV movie? 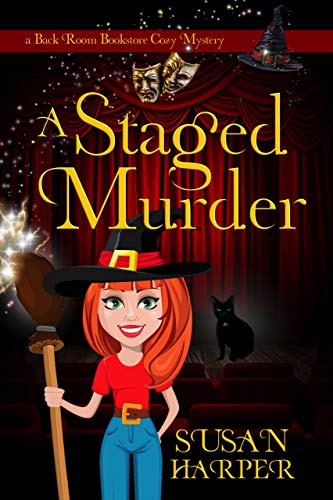 New meaning to the phrase “Break a Leg”

Monica attempts to integrate into her new community by taking in a play. When another murder interrupts her, she’s not on the trail of another killer. Will her sleuthing skills, and a little bit of magic, be enough to bring a killer to justice?

A Staged Murder is part of the Back Room Bookstore Cozy Mystery series. If you like fun paranormal mysteries, you will love Monica and her friends, both human and supernatural.

Get A Staged Murder and start solving your next supernatural mystery today! 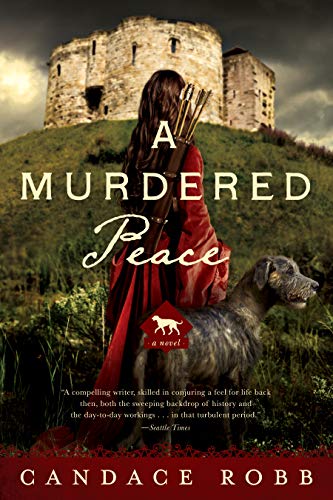 It is deep winter in York, 1400, the ground frozen, the short days dimmed with the smoke from countless fires, the sun, when it shines, low in the sky. It is rumored that the Epiphany Uprising, meant to relieve the realm of the Henry the usurper and return King Richard to the throne has, instead, spelled his doom. As long as Richard lives, he is a threat to Henry. So, too, the nobles behind the plot. The ringleaders have been caught, some slaughtered as they fled west by folk loyal to Henry, and the king’s men now search the towns for survivors.

A perilous time, made worse for Kate Clifford by the disappearance of Berend, her cook and confidante, shortly after Christmas. Her niece saw his departure in a dream—he said he was honor bound to leave. Honor bound—to a former lord? One of the nobles who led the uprising? Is he alive? She is hardly consoled when Berend reappears, wounded, secretive, denying any connection to the uprising, but refusing to explain himself. When he is accused of brutally murdering a spice seller in the city, Kate discovers a chest of jewels in his possession. Some of the jewels belong to her old friend Lady Margery, wanted by the king for her husband’s part in the uprising. For the sake of their long friendship, and the love she and her wards bear for him, Kate wants to believe his innocence. So, too, does Sir Elric. And he has the powerful backing of the Earl of Westmoreland. All she need do is confide in him. If only she trusted her heart.  (Amazon) 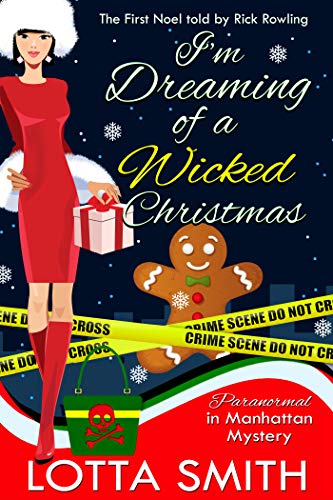 Dashing, debonair paranormal investigator Rick Rowling usually spends the holidays at luxurious resorts, with women falling at his feet. What would make him trade champagne toasts and caviar dreams for a Yuletide dinner in Queens with the family of his ravishing assistant Mandy, the only woman who seems immune to his charms?

Turns out the single witness to the murder of Santa Claus is a lovelorn ghost who wants a date with Rick in exchange for information on the suspect. A romantic romp through the city could become a double date with destiny for the FBI’s sexiest sleuth, but can he solve the case before the spirit departs forever?

Take a look back at the Rowlings’ first Noel in this special holiday installment of the Manhattan Mystery Series.

Buy I’m Dreaming of a Wicked Christmas and start solving your next mystery today!

Paranormal in Manhattan Mystery Series
Each book in the series is a stand-alone story, but your enjoyment of each story will be increased if you read them all.
*Book 1-Wicked for Hire
*Book 2-W is for Wicked
*Book 3-Wicked Little Secret
*Book 4-Wicked of the Christmas Past
*Book 5-Sweet Wicked of Mine
*Book 6-Wicked and Haunted
*Book 7-Wicked, Manor, and Murder
*Book 8-Wickedly Ever After
*Book 9-Speak of the Wicked
*Book 10-Wicked as a Christmas Fruitcake
*Book 11-Wicked in Wonderland
*Book 12-Dial W for Wicked
*Book 13-Wicked Egg to Crack
*Book 14-The Wickedest Showman
*Book 15-Wicked and the Beast
*Book 16-Wicked or Treat!
*Book 17-I’m Dreaming of a Wicked Christmas  (Amazon) 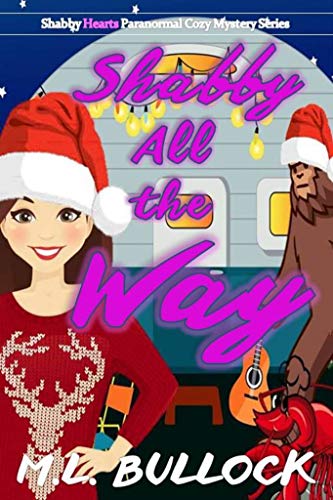 It’s Christmas on the bayou…and there’s a Grinch on the loose!

Christmas decorations and packages go missing at Shabby Hearts Trailer Park and Campground, and naturally everyone blames Bigfoot. A dirty Santa game at the Lake Dennis Senior Center gets completely out of hand. Aunt Mavis launches Operation Mistletoe with fatal results. Cyrus considers hanging up his thong for good, but a special request puts him back in the spotlight…and Arcadia isn’t happy about it. A sketchy fruitcake makes the rounds, and Lucky is in the running for the Bad Dog of the Year Award.

A Touch of Shabby

Shabbier by the Minute

Shabby All the Way 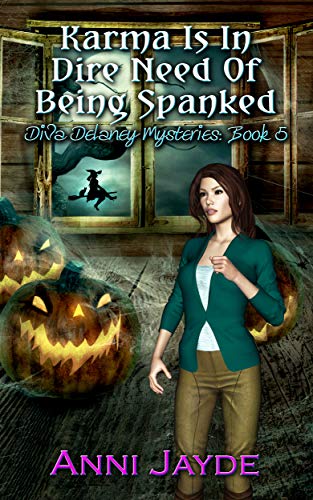 Diva Delaney is in no mood to deal with men after what happened between her and the sheriff. With her curse now finally lifted, she should be free to date, but of course nothing is that easy for her. She is beginning to doubt that she’ll ever find a good man to settle down with.

Her next cases will involve stealth, cunning and bravery, three things which the psychic medium lacks completely. Diva will have to force herself to step out of her comfort zone in order to help her clients. Both of her cases will take her out of town, so she won’t have her ghostly sidekicks to assist her in their usual wacky manner. Frankly, that might not be such a bad thing.

With the return of Wade and Wyatt Westmore, things are going to become interesting in Hollowood Grove, especially for her cousin, Courtney. Meanwhile, Diva’s main nemesis is driving her to the edge. The wickedly handsome warlock knows how to push her buttons and is an expert at manipulating her into owing him yet more favors. This time, Haydn Creighton might find he’s the one who will need to be rescued from danger.  (Amazon)ns Available:  Kindle 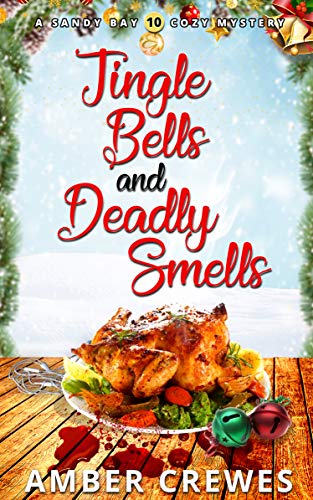 “Each of the Sandy Bay mysteries are great! I think they just keep getting better.”

Christmas is that season…that season of pleasant surprises…delicious smells…and family and friends to share the holidays with.

This Christmas, Sandy Bay’s lovable bakery owner, Meghan Truman, gets a whole more than she bargained for…plus a dead body at the door of her favorite restaurant. Some people would rather sweep this murder under the carpet but something smells awfully fishy about the events surrounding it.

Will Meghan join Detective Irvin to find the murderer or will this event serve to etch unpleasant memories of this most wonderful time of the year?

Book 10 in the Bestselling Sandy Bay Cozy Mystery series, which can be read in one to two hours! Perfect for a lunchtime read or on a commute to/from work. If you want to enjoy a quick light-hearted read, with an amateur female sleuth, mouth-watering culinary desserts and a gripping murder mystery with a touch of romance, then you’ll love Meghan Truman and all the quirky characters in Sandy Bay.