Here is a list of a few of the many Christmas cozies that are available for your reading pleasure.  Hope you see something that catches your eye.  Happy Reading. 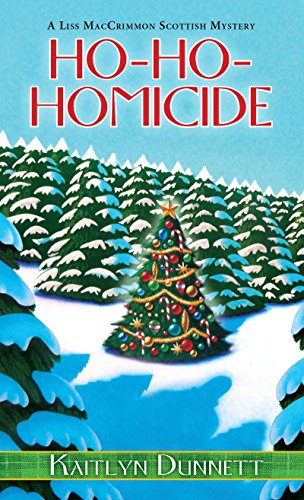 Business is booming at the Scottish Emporium in Moosetookalook, Maine, and Liss MacCrimmon Ruskin couldn’t be happier–or busier. A romantic getaway at a rustic Christmas tree farm is just what she needs. But the property’s mysterious past has her feeling less than merry. . .

Liss is surprised when an old friend from high school asks her to spend a week at the Christmas tree farm she recently inherited from a great-uncle. Realizing it would be the perfect chance for her and her husband Dan to get away from work, Liss happily accepts the offer and packs her bags for the tiny town of New Boston.

Upon their arrival, Liss and Dan are greeted by a ramshackle farmhouse and unfriendly townsfolk. It’s hardly the idyllic vacation locale they’d hoped for, especially when needling neighbors start raising questions about the farm’s dark history. Who was the man whose body was found neatly netted in a shipment of Scotch pine? Why did the owner vanish into thin air? And why are the trees growing so close together, forming a maze more twisted than a Celtic knot?

The rumors pile up faster than snowdrifts in a blizzard, and as Liss starts un-wrapping the truth, she discovers something even more scandalous than murder hiding beneath the town’s humdrum façade. When a series of “accidents” strikes the farm, she’ll have to spring into action faster than a Highland Fling to find the killer who’s been lurking among the pines–before she ends up in a pine box herself. . .  (Amazon) 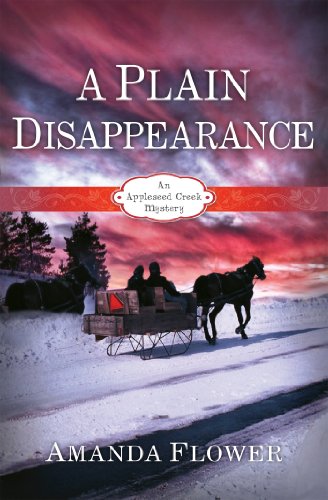 USA Today recently hailed award-nominated author Amanda Flower for A Plain Death, calling it “the first Amish rom-com . . . bring on the next one!” As the enthusiastic reviews continue to mount, she’s back with her third Appleseed Creek mystery, A Plain Disappearance.

It’s Christmas time in Amish Country, and Chloe Humphrey has begun settling into her life in Appleseed Creek excited to see where her new relationship with Timothy Troyer will lead. Unfortunately it leads to murder when the couple discovers the body of Amish teenager Katie Lambright while on their first date.

Near the scene there is evidence that Timothy’s friend and auto mechanic Billy Thorpe is involved with the crime. The police reveal Billy is not really who he said he was and has been living the last decade in Knox County under a stolen alias. Now, Chloe and Timothy must find Billy, bring him to justice, or prove his innocence.  (Amazon) 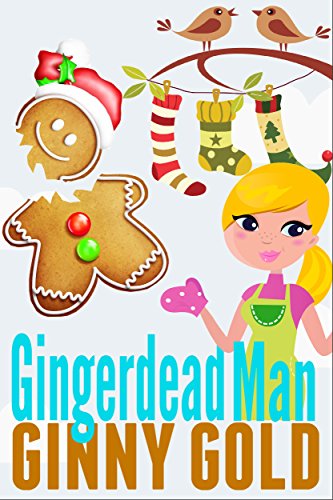 Christmas is just around the corner and Kori is busier than ever. She has the town cookie exchange, Secret Santa at The Early Bird Café and plenty of time spent with family. So when she finds a dead body in the parking lot of the café, her work load just about doubles as she hunts down the killer.

By Christmas Eve, Kori has plenty of questions but not enough answers. Boyfriend, Lieutenant Zach Gulch, tries to warn her away from the investigation but all of his pleas fall on deaf ears. Even a warning from the killer can’t keep Kori off the trail as she thinks she’s getting closer.

But a single wrong turn could spell disaster for Kori. Will she be able to find the right lead before she’s added to the body count?

INCLUDED: In The Kitchen with Ginny Gold—A Special Gift For You!

**Gingerdead Man is approx. 32K words and is volume 6 in The Early Bird Café Cozy Mystery Series. Ginny Gold books can be read and enjoyed in any order.  (Amazon) 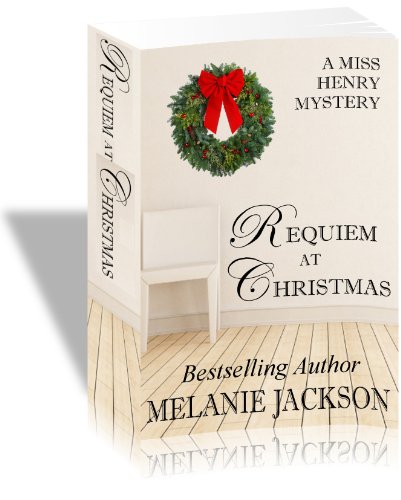 “Requiem at Christmas” is the third installment in the Miss Henry Cozy Mystery Series.

Juliet Henry loved snow. Without snow there was no cross-country skiing. No skiing and there was no Christmas spirit, however feeble, to shine on the bleak winter. While others might scan the December skyline looking for the first Christmas lights in their neighborhood, or search the stores the principal Christmas tree to go up at the mall, or even to hear the first Christmas carol to grace the airwaves, each winter she waited for the weather reports and news of the first fat flakes falling in the mountains. This year the snow and two other events combined to make an alluring vacation and she looked forward both to skiing and attending the Requiem Mass written by her neighbor which was being performed at the Lake Tahoe Celtic Festival. But her plans go awry when she is stranded by a blizzard on a back road and finds herself the only the witness to a murder. Her woes are further compounded when the corpse disappears.  (Amazon) 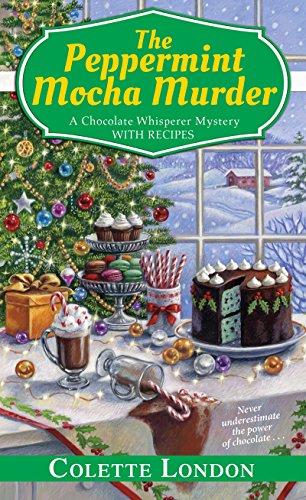 It’s beginning to look like a merry Christmas for Hayden Mundy Moore. On vacation from providing her sought-after expertise in all things chocolate, Hayden heads to snowy New England with her friend and financial advisor, Travis, for the opening of his pal’s highly-touted holiday musical. But when the show’s producer is murdered, Hayden trades sampling Chocolate Santas for finding the killer—especially since this time, Travis is the one asking for her help . . .

Soon Hayden discovers there’s more to Travis’s chic hometown than mulled wine and cocoa cookies. But that’s just the beginning. Almost no one, including Travis, is quite what they seem. Did the show’s lead have more savage motives than stardom? Could the dead producer’s husband have felt a murderous envy for his successful wife? Getting behind the mistletoe and jingle bells will take all of Hayden’s savvy—along with some super caffeinated Peppermint Mochas—if she hopes to catch a killer with a heart more bitter than the darkest truffle . . .

“Chocoholics and food cozy fans rejoice! With prose as smooth and delicious as its theme, this quality debut cozy introduces a smart protagonist with an unusual and tasty profession.”
—Library Journal (starred) on Criminal Confections  (Amazon) 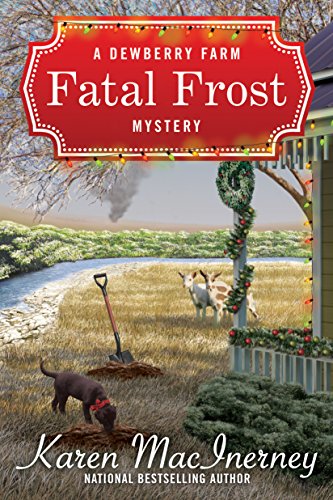 Lucy Resnick’s nerves are as tight as a tea cozy. Her new goats, Hot Lips and Gidget, keep making a break for the town square, her truck is dying, and her boyfriend’s gorgeous ex-wife is in town for the holidays. Worse, someone’s digging holes on her land…and uprooting her peach orchard and dewberry patch in the process. Lucy needs additional holiday stress like she needs a blow to the head—which she receives one night, courtesy of the mystery digger.

When the dim-witted sheriff arrests one of Lucy’s best friends, the former reporter puts her own problems on the back burner and starts investigating. What she finds is a patchwork of clues—an injured puppy, a sapphire necklace gone missing, and a string of poison-pen letters—that draws her deep into a web of small-town secrets.

Word travels fast in Buttercup. When the killer learns Lucy’s on the trail, Lucy finds she needs more than her reporting skills to save her friend—she needs a Christmas miracle.  (Amazon) 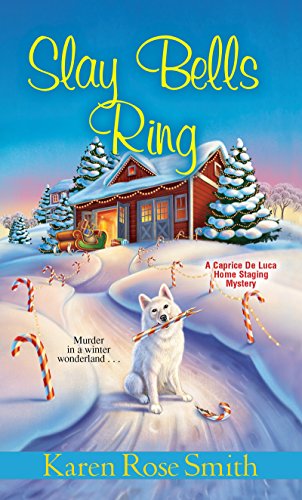 “This is a great storyline that will keep you guessing to the very end.” Suspense Magazine

It’s beginning to look a lot like Christmas, especially now that Caprice De Luca has wrapped up her holiday-themed staging gig at a stunning historic home in downtown Kismit, Pennsylvania. Behind all the red ribbon and glowing string lights, homeowners Chris and Sara Merriweather have it all. But Chris, a Vietnam vet who plays Santa every year at the community park, has been displaying strange behavior after a recent trip to Washington, D.C.

The joy of the season vanishes entirely when Chris is found murdered on Santa Lane, leaving behind his loyal malamute and lots of unfinished business. As Caprice uncovers hidden secrets in Santa’s workshop, the pressure is on to catch the candy cane-wielding culprit–before she’s next on a killer’s deadly wish list . . . 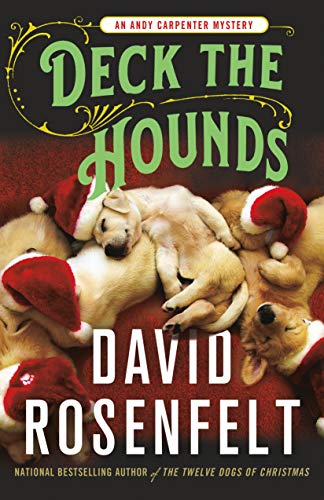 Reluctant lawyer Andy Carpenter doesn’t usually stop to help others, but seeing a dog next to a homeless man inspires him to give the pair some money to help. It’s just Andy’s luck that things don’t end there. Soon after Andy’s encounter with them, man and dog are attacked in the middle of the night on the street. The dog defends its new owner, and the erstwhile attacker is bitten but escapes. But the dog is quarantined and the man, Don Carrigan, is heartbroken.

Andy’s wife Laurie can’t resist helping the duo after learning Andy has met them before… it’s the Christmas season after all. In a matter of days Don and his dog Zoey are living above Andy’s garage and become two new additions to the family. It’s not until Andy accidentally gives away his guest’s name during an interview that things go awry; turns out Don is wanted for a murder that happened two years ago. Don not only claims he’s innocent, but that he had no idea that he was wanted for a crime he has no knowledge of in the first place. It’s up to Andy to exonerate his new friend, if he doesn’t get pulled into the quagmire first.

David Rosenfelt’s signature wit, charm, and cleverness are back again in this most exciting installment yet.  (Amazon)