Here is a list of some of the new releases for the week of January 6th, 2019.  I am going to divide the list into 3 days because there are so very many of them for this week. Today is the second day of my list for this week. Hope you find some selections for your weekly reading. Enjoy and happy reading. 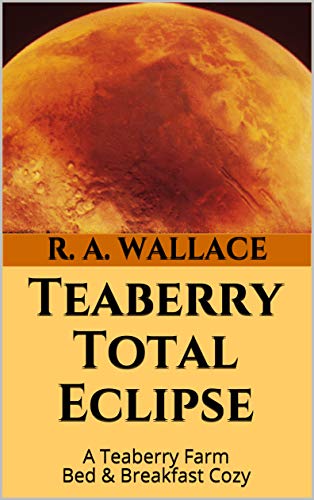 A Teaberry Farm Bed & Breakfast Cozy Book 14
A murder during a total lunar eclipse leaves police in the dark. After bringing home their purchases from a large estate sale, Teaberry residents are plunged into danger. Can Megan tie the two events together and unravel the mystery before the killer strikes again? This mild cozy mystery offers a clean read with a female amateur sleuth and friends in a small-town setting. Main characters in the series are multigenerational.  (Amazon) 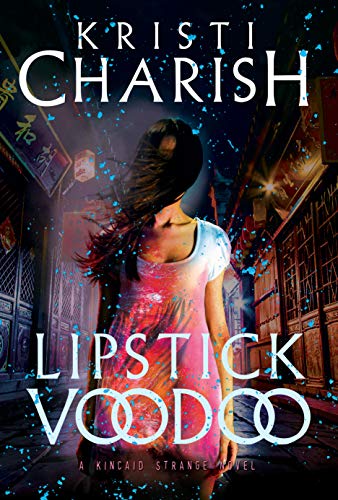 Kincaid Strange, not your average voodoo practitioner, is back in the freshly imagined and hugely entertaining second installment of Kristi Charish’s urban fantasy series.

Kincaid Strange cannot catch a break. After dealing with a spate of paranormal murders, there’s barely time to recuperate–let alone sleep in–before there’s a new problem in Kincaid’s world of paranormal activity. When her roommate, Nathan Cade–the ghost of a grunge-rocker with a pathological lack of self-control–comes home bound to a dead body, it’s up to Kincaid to figure out how to free him. Ideally before her new mentor, Gideon, a powerful sorcerer’s ghost, discovers that Nate is trapped in the body he’d coveted for himself.
When Aaron, a Seattle cop on the afterlife beat–and Kincaid’s ex–calls her in to help out with a cold case, she takes the chance to mend fences with the police department. The problem: they want to interview Nate’s ghost, which she can’t produce. Then people from Nate’s past start showing up dead, and what’s killing them doesn’t seem to be human. And the way it’s killing them is especially brutal.
Nate’s hiding something, but he’s Kincaid’s friend and she wants to help him. But she also wants to stay alive….  (Amazon) 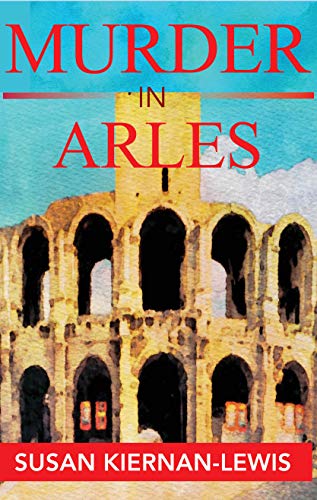 Once an arena for gladiators and wild beasts, the Arles Amphitheatre today is a popular tourist attraction—except when it is a setting for murder

When an afternoon flea market held in the Roman ruin spells mortal ruin for one poor soul the police have good reason not to care who killed him. But because Maggie’s small son was nearby when the murder occurred, Maggie can’t let it go—even if it means following and unraveling the tangle of lies and secrets to find the truth–and forever upsetting the happy balance of life at Domaine St-Buvard in the process. 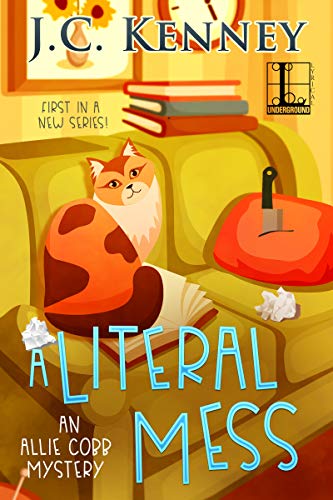 The first book in a new series featuring Allie Cobb brings the New York literary agent back to her Hoosier home town where a mysterious death keeps everyone on spoiler alert . . .

Allie Cobb left home for the literary circles of Manhattan to make her name out from under the shadow of her legendary father. Now his death brings her and her rescue cat Ursula back to the southern Indiana town of Rushing Creek, population: 3,216. But a tragic new chapter hits the presses when the body of her father’s hard-drinking, #1 bestselling client is found under the historic town bridge. The local police suspect foul play and their prime candidate for murder is the author’s daughter—Allie’s longtime friend.

Determined to clear her bestie, Allie goes into fact-checking amateur detective mode while trying to ignore the usual rumormongers. Those with means, motive, and opportunity include the vic’s ex-wife, his rejected girlfriend, the mayor, and a rival agent trying to mooch clients. With a rugged genealogist distracting her and the imminent Fall Festival about to send tourists descending on their once-peaceful hamlet, Allie needs to stay alive long enough to get a read on a killer ready to close the book on a new victim: Allie . . .  (Amazon) 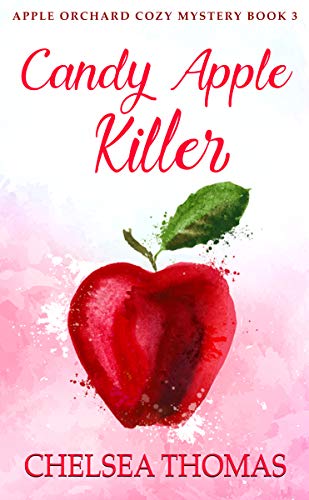 Poisoned apples. Secret motives. A past that’s too dark to hide.

Candy Apple Season is huge on the orchard. Essential, even.

So when a dead body turns up on the farm, Chelsea and May have to find the killer, or the business could go under.

Worst of all? Hunky Detective Wayne Hudson has turned against Chelsea, so she and Miss May have to solve this murder on their own.

Will the girls solve the mystery before it’s too late?

Will the hundred year old orchard have to close for good?

Will things continue to heat up between Chelsea and Wayne?

Read to find out.

You’ll love this cozy because the story has plenty of twists, the sleuths are more determined than ever, and the romance flirty and cute.

Candy Apple Killer is Book 3 in the Apple Orchard Cozy Mystery Series, but the books can be read in any order. Read FREE on Kindle Unlimited today.

This book does not contain bad language or graphic violence. But it does include a cute tiny horse named See-Saw!

Get Your Copy Now.  (Amazon) 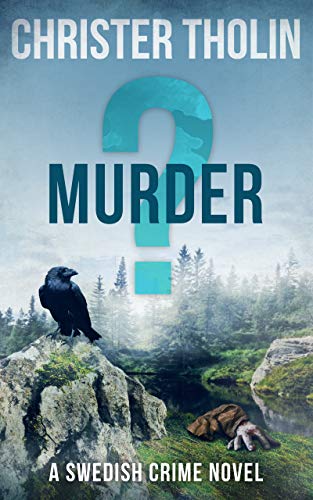 Christina’s idyllic existence with her husband Patrik comes to an abrupt end when Patrik suddenly vanishes from their suburban home in Stockholm. Christina is precipitated into a hellishly desperate and anguished search for Patrik – which after six weeks turns up nary a trace of him.

At her wits end, she contacts local sleuths Lars and Elin, who, after a brief investigation, reach the conclusion that Patrik simply decided to abandon his cushy existence to embark on a new life –without Christina.

Lars and Elin ultimately trace Patrik’s movements to the wooded wilds of northern Sweden, but too late – he’s found dead. The police rule his death an accident, but Christina thinks otherwise – and so she asks Lars and Elin to do a thorough investigation of the circumstances surrounding Patrik’s demise. Was his death really accidental, or was foul play involved? And was the mysterious Natalia somehow implicated?

Unfortunately, none of the countless leads that Lars and Elin follow up gets them any closer to solving the mystery of Patrik’s death. But then they get a startling break that results in Christina having to make a tricky and extremely consequential decision that plunges our three protagonists into a life or death struggle.

Buy MURDER? to see how this suspenseful case is solved!  (Amazon) 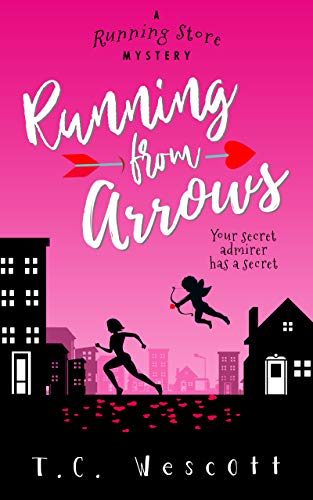 Valentine’s Day is coming up and Lacy is single. If that’s not bad enough, she has a secret admirer. Is it the compassionate,haunted detective, the ruggedly handsome businessman, the suave maître de, the guy in her running group who likes to stare, or maybe someone who’s not on her radar? She’ll find out soon enough because he’s invited her to dinner. Now the question isn’t how long Lacy will remain single but how long she’ll remain alive.

Running from Arrows is part two in a series but can be read as a stand-alone.  (Amazon) 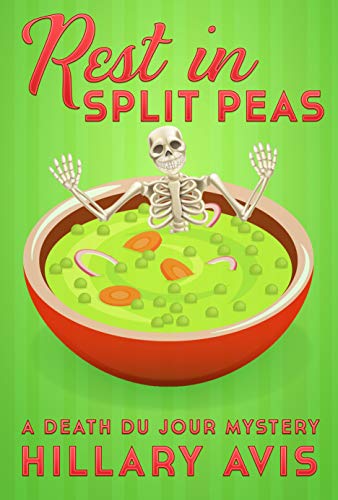 Business at Bethany’s little soup kiosk in the train station is simmering along, but a competitor has the nerve to open up right next door!

It’s not all bad for Bethany. The fresh rivalry draws the attention of a certain handsome local food critic, and she’s definitely not mad about that.

But when her competitor is not-so-accidentally hit by a train, Bethany is the prime suspect in an investigation that will throw Newbridge—and Bethany’s tight circle of quirky friends—into a stew of suspicion.

Rest In Split Peas is the second book in the Death du Jour series. If you like cozy mysteries full of soup and suspense by the sea, this is the book for you. 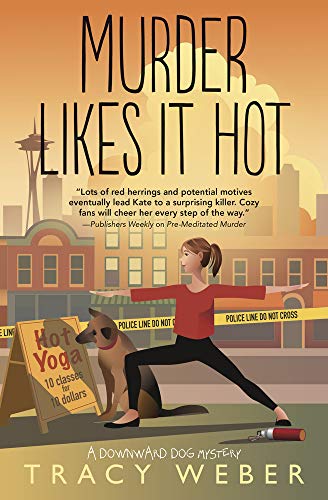 Newly married yoga instructor Kate Davidson feels stuck in low-energy limbo, despite her high-energy life. She’s trying to conceive a child, keep her studio afloat now that the ultra-cheap Some Like It Hot Yoga studio has opened across the street, and start a yoga program at a local resource center for homeless youth.

When a center employee is found dead, Kate sets aside her fertility and financial woes to delve into the world of teenage homelessness. While digging for clues with her German shepherd Bella, Kate discovers that family can be formed by bonds stronger than shared DNA, and she must defend it at all costs.

“Gripping … Those who like their cozies with a dark edge will be rewarded.”—Publishers Weekly  (Amazon)