Here is a list of some of the new releases for the week of March 3rd, 2019. I am going to divide the list into 4 days because there are so  many of them for this week. Today is the first day of my list for this week. Hope you find some selections for your weekly reading. Enjoy and happy reading.

While helping Ruby Wilcox clean up the loft above their shops, China comes upon a box of antique handcrafted lace and old photographs. Following the discovery, she hears a woman humming an old Scottish ballad and smells the delicate scent of lavender.…

Soon, strange happenings start to occur in Thyme and Seasons. When a customer sees a mysterious woman picking flowers nearby and then suddenly disappearing, China must finally admit what Ruby has always known—their building is haunted. But by whom?

As China investigates, the tragic story of a woman in one of the old photographs unfolds. China delves into the century-old mystery and realizes that solving it could have unimaginable repercussions in the here and now.  (Amazon)

Sherlock Holmes has just uncovered the truth about the theft of a priceless ruby. The wealthy Lady Damury staged the theft and tried to frame her husband – but just as Holmes reveals the truth, Lady Damury is found murdered. Holmes deduces that this is no crime of passion, but the work of a ruthless killer with no connection to the jewel. With reports of a man in a strange, trance-like state, Holmes finds himself entangled in a dangerous game of cat and mouse with the sinister Dr Caligari…  (Amazon)

THE UNIVERSE IS MADE OF STRING. WHEN THE KNOTS TIGHTEN, THE COSMOS QUAKES.

It’s a tough job being a gumshoe in an interdimensional city full of gods, living concepts and weirder things. Good thing I’m a stringwalker, able to jump between realities.

It started when I was hired to investigate an explosion at a casino. A simple heist, I thought, but it turned into a race to stop the apocalypse. So I rolled the dice, and now I’m up against the ancient Greek Titans, an interdimensional spider god and a mysterious creature known as the Fool. I’m going to need more than just luck to solve this one. 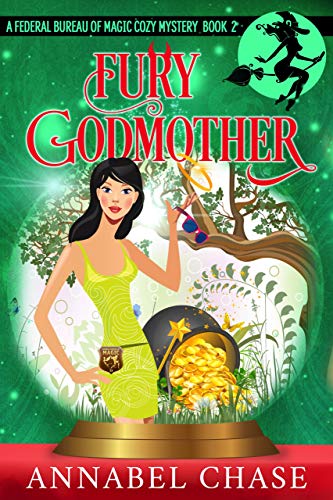 Be careful what you wish for…

I’ve only been back home a few weeks and already strange events are happening all over town. Wishes are coming true to the delight of those affected. Despite the seemingly good fortune, I need to put on my Federal Bureau of Magic badge and get to work. I can’t let supernatural shenanigans disrupt the natural order of life here, no matter how awesome they seem.

When their good luck starts to take a dark turn, I have to kick my efforts into overdrive. Can I crack the case before these dreams-come-true turn into nightmares? 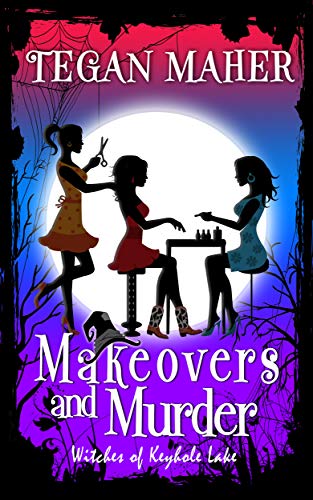 The winter doldrums have everybody in a funk, so Coralee decides a pre-spring makeover special is just the thing to lighten the mood. When her high school rival comes back to town, just as catty and mean as she was as a teenager, the first place she goes is to the Clip N Curl, with the sole purpose of making Coralee see red.

When the woman turns up behind the shop with a pair of hair scissors plunged in her back, Coralee becomes the prime suspect.

Can Noelle and her crew clear her good name – without the inadmissible testimony of a ghost – before her next styling gig is in prison?

This is Book 8 in the Witches of Keyhole Lake Southern Mysteries series.  (Amazon) 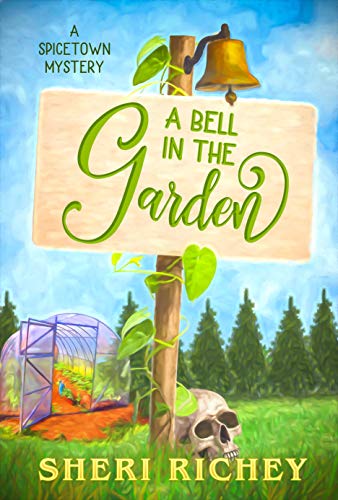 When the owner of a new business digs up buried bones on opening day, the rumor mill in Spicetown comes alive!

Mayor Cora Mae Bingham and Police Chief Conrad Harris are faced with the Chamber of Commerce President on a rampage, the sweet biscotti-baking neighbor living a lie, the notorious town floozy being misunderstood and everyone in town speculating about who is missing.

Figuring out who the bones belong to will open up the cold cases in Spicetown and unearth all the old gossip that was never truly buried. Cora Mae and Chief Harris learn a few things about their fellow citizens along the way.  (Amazon) 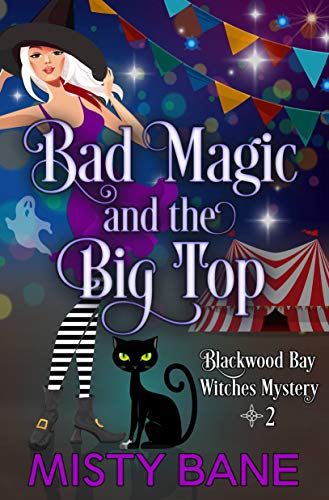 A traveling circus. A possible psychic. A mysterious magician. Dead clowns. It’s just another Monday in Blackwood Bay. And it’s going to be an interesting one…

Just when I was finally settling into my new life as a witch in Blackwood Bay, a traveling circus comes roaring into town and a dead clown winds up on my doorstep. Things only get messier when someone starts picking off the circus performers one-by-one. It’s evident that there’s a far more sinister performance going on behind the scenes, and this traveling circus may have more skeletons buried in their closet than the Rathmore family. Finding out whodunnit won’t be so easy. As luck would have it, the only thing scarier than the ghost of a dead clown is Granny, and she’s always along for the ride… whether she likes it or not.

Come one, come all! Ladies and gentleman, boys and girls! Welcome to the greatest circus on earth! Tonight, you will see daring stunts, fantastical feats and death-defying performances. You will be amazed at the buried secrets, hidden betrayals, and murderous vengeance. The show is about to begin and it’s going to be killer!  (Amazon) 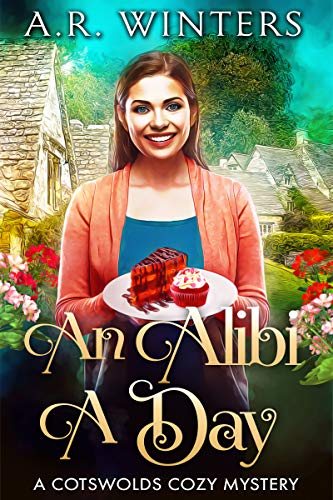 Her normally well-planned-out days are upended when she tries to help out her friend Bree, owner of her favourite Cotswolds café.

Before she knows it, Allie is accused of murder, and written up in the local papers as a killer – and worse, she seems to be in the real killer’s crosshairs!

Join Allie and her sister Jackie as they try to sort things out. But throw in a handsome Detective Inspector, a mysterious new villager, and a sudden jackpot win – will life ever go back to normal?

“A cute light read with a final twist at the end.” – Stacey Puleio, Amazon.com

This is a humorous cozy mystery featuring a strong female protagonist, some unusual friends and family, and a mystery that needs solving! It has no graphic gore, bad language or sex.  (Amazon) 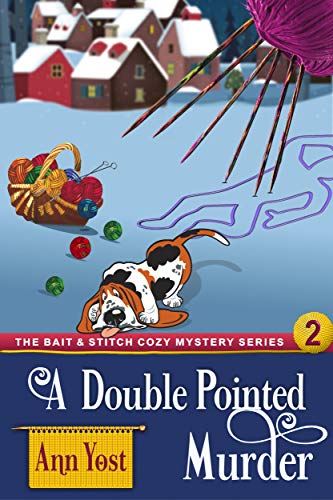 When Cricket Koski, a barmaid from the Black Fly, is stabbed to death with a double-pointed knitting needle on New Year’s Eve and deposited in the bed of Lars Teljo, it’s up to Hatti Lehtinen to exonerate her ex-brother-in-law. It’s not that Hatti, who runs a fishing-slash-knitting supply shop, is a trained detective. It’s just that Sheriff Clump considers his collar a slam dunk because an affair between Lars and Cricket three years earlier has made him vulnerable to blackmail.

But there’s a problem…

Everyone in the tiny, Finnish-American town on the Keweenaw Peninsula has to wear more than one hat and, as acting president of the chamber of commerce, Hatti has to host a quintet of television personalities who arrive unexpectedly to film an Antiques Roadshow knockoff called What’s in Your Attic?

What’s in the local attics are pieces of Nazi memorabilia from Finland’s World War II partnership with Hitler and when a letter disclosing the existence of a piece of Nazi artwork is discovered, all attention turns to trying to find the masterpiece.

Hatti begins to suspect there’s a connection between the arrival of the newcomers and the death of Cricket Koski and after a second shocking murder, she is sure of it. The only question is, which one of them did it? And, since double-pointed needles are packaged in sets of four, does that mean there are two murders still to come?

Publisher’s Note: While you don’t need to be a knitter to enjoy this series, you just might pick up a fun and rewarding hobby in addition to enjoying a thoroughly delightful, clean and wholesome, mystery with a good dose of humor. 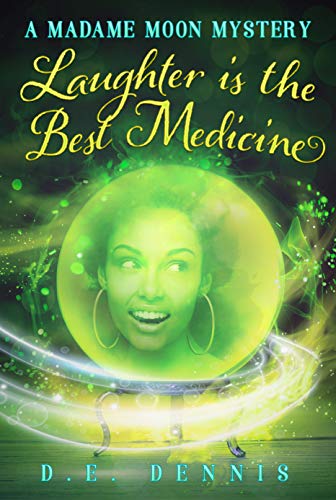 The final chapter in this story told in reverse…

When a serial killer comes to Florida University, empath Amari Moon packs her pepper spray and carries on with her life, thinking a little common sense and supernatural ability will keep her safe. But sadly, there are other ways to hurt an empath.

Amari’s best friend becomes the killer’s next victim and the bond they shared shatters along with Amari’s mind.

Now with the killer eluding the police and the dean of the university threatening to close the school, Amari must find her friend’s killer before the suspects scatter all over the county and her tenuous hold on sanity snaps.  (Amazon) 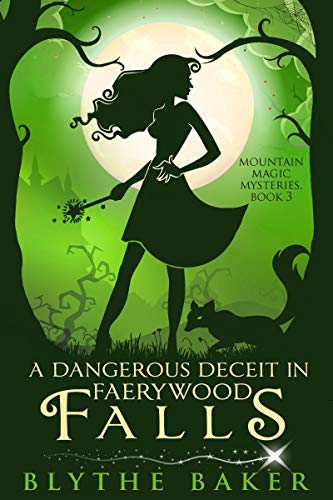 In Faerywood Falls, magic is the curse that keeps on giving.

Marianne’s investigation into her past has stalled. The only person who seems to have the answers she needs is a manipulative spell singer – and she’s not talking. To make matters worse, Marianne is accidentally stealing other magic users’ gifts again, and she can’t seem to stop herself.

When yet another hunter turns up dead in Faerywood Forest, Marianne can’t ignore the mysterious danger plaguing the woods anymore. Not even if the trail of clues leads her to a trusted friend with something to hide.

With the evidence implicating a man she cares for, can Marianne get to the bottom of a string of killings, before the murderer strikes again?  (Amazon) 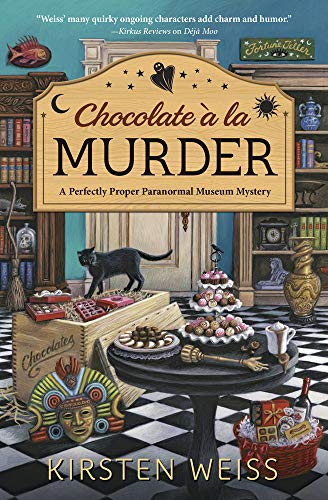 Maddie gets rattled by a candy-coated murder.

It’s Wine and Chocolate Days in San Benedetto, and paranormal museum owner Maddie Kosloski has sweet dreams about her new Magic of Chocolate exhibit. Her latest attraction is a haunted Mexican whisk called a molinillo that rattles if someone lies.

When Maddie visits the town’s new boutique chocolate shop, she finds one of the owners dead and covered in melted cocoa. Maddie’s determined to catch the killer, and she soon uncovers deadly dealings in the world of artisan chocolate. But the deception surrounding those dealings are enough to make the molinillo rattle all night. Will Maddie have to temper her passion for sleuthing before a killer makes her fate bittersweet?

“Humor, hints of romance, and twists and turns galore elevate this cozy.”—Publishers Weekly