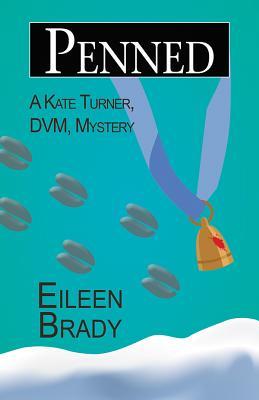 Dr. Kate Turner, DVM, is seven months into her one-year contract to cover for a Hudson Valley vet taking a year-long world cruise. She’s getting used to the hospital and house-call workload but not to the sometimes dangerous, if not deadly, critters – animal and human – she meets.

Eighty-something-year-old Gloria LaGuardia has been installed at an assisted living center by her niece. They bump into Kate at the Oak Falls annual Halloween street bash. And while Gloria’s conversation indicates some mental confusion – she asks a couple dressed as rabbits if they are real or not – she’s still sharp. And she says, “Someone evil is here. I saw him.”

Saw who? Will this chance meeting draw Kate into the path of Carl Wolf, a notorious fugitive twenty-one years on the FBI’s Most Wanted List? Is Wolf hiding in plain sight in or around Oak Falls?

When Gloria, once an artist endowed with a sharp eye, is murdered, Kate doesn’t know what to think. But author Tucker Weinstein approaches her at Gloria’s funeral and indicates he believes the old woman. Further, he’s devoting a chapter in his book to Carl Wolf.

The FBI doesn’t appear interested. Gloria’s family just wants to move on. But publicity-hungry Tucker mentions Kate in a newspaper interview that goes viral. She’s overloaded with new clients like Billy, a Nubian stud goat living penned up with alpaca, llamas, and more goats on a local farm producing milk, wool, and cheese, and a grumpy Chihuahua dressed up like a Thanksgiving turkey. Yet she senses someone is now following her. An undercover FBI agent? Carl Wolf on the prowl?

Determined not to be a victim, Kate digs deep into the arson/murder Wolf committed long ago. Are the clues to unmasking him hidden in the past, or closer than she thinks?

The characters are well developed and well rounded. I really enjoy the relationships between Kate and the staff at the veterinary clinic, they were like a family instead of coworkers. They liked to gossip and they wanted to be in everyone’s business, including Kate’s. They do not let her get away with anything. She is not very lucky in love and she has some decisions to make about her beaus.

The author is very talented in her descriptive writing and through much of the book, I felt like I was right there, going on house vet calls with Kate and watching all of the action taking place. The writing style flows smoothly and the book is an easy read. I really enjoyed the day to day workings at the clinic and I was fascinated when Kate was working with the animals.

The mystery was well plotted and moved at a steady pace. The author is very talented in creating suspense with the written word. The more I read the book, the more tension I felt. I felt like I was climbing a set of stairs and each step took me closer to climatic conclusion. I really enjoyed that feeling.

I would highly recommend this book (and series) to anyone who enjoys a well crafted cozy mystery. And if you like books about animals, then this is a must read.

I voluntarily reviewed an ARC of this book provided by the publisher, Poisoned Pen Press, and NetGalley, which I greatly appreciate.