Here is a list of some of the new releases for the week of March 17th, 2019. I am going to divide the list into 4 days because there are so many of them for this week. Today is the fourth and final day of my list for this week. Hope you find some selections for your weekly reading. Enjoy and happy reading.

S.C. Perkins’ Murder Once Removed is the captivating first mystery in the Ancestry Detective series, in which Texas genealogist Lucy Lancaster uses her skills to solve murders in both the past and present.

Except for a good taco, genealogist Lucy Lancaster loves nothing more than tracking down her clients’ long-dead ancestors, and her job has never been so exciting as when she discovers a daguerreotype photograph and a journal proving Austin, Texas, billionaire Gus Halloran’s great-great-grandfather was murdered back in 1849. What’s more, Lucy is able to tell Gus who was responsible for his ancestor’s death.

Partly, at least. Using clues from the journal, Lucy narrows the suspects down to two nineteenth-century Texans, one of whom is the ancestor of present-day U.S. senator Daniel Applewhite. But when Gus publicly outs the senator as the descendant of a murderer―with the accidental help of Lucy herself―and her former co-worker is murdered protecting the daguerreotype, Lucy will find that shaking the branches of some family trees proves them to be more twisted and dangerous than she ever thought possible.  (Amazon) 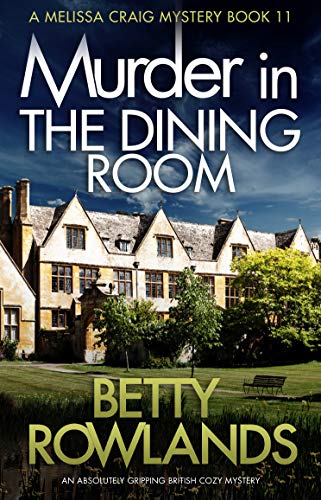 A grand old house soaks up the golden summer sun… but inside the dining room something dreadful has happened.

Melissa couldn’t be happier that summer has arrived. She’s delighted to have her mother back by her side, and she is extending her beloved Hawthorn Cottage so her new family can live together.

Meanwhile, Melissa’s mother Sylvia is back in good health and enjoying a brief stay at a stately retirement home. She loves getting to know the residents, until first a dog and then his owner are both found dead in the dining room. Like mother, like daughter, Sylvia decides to do a little investigating of her own.

Convinced that the deaths are suspicious, Sylvia starts probing her fellow residents, trying to find out who might have wanted the dog and its owner dead. Could it be the once-married couple, or the glamorous actors or the harassed manager of the home?

When one of Sylvia’s friends falls ill in suspicious circumstances, Melissa realises her mother has rattled someone, but who? And what happens if the killer realises they’ve been rumbled? Will Sylvia find herself meeting a villain in the dining room? And can Melissa find the culprit before another life is taken?

This book was previously published as No Laughing Matter.

What readers are saying about Betty Rowlands:

‘Hooked from the first pages… wonderful… fascinating, full of twists and turns… kept me guessing till the end.’ Goodreads reviewer, 5 stars

‘Brilliant… I read this book in one sitting and could not put it down. I would highly recommend this book to anyone.’ NetGalley Reviewer, 5 stars

‘An absolutely addictive, wonderful story. Loved it from start to finish. Great pace and a delightful setting, colourful characters and thrilling mystery. This was a brilliant story and I cannot wait for more!’ Renita D’Silva, author of The Forgotten Daughter, 5 stars

‘Perfect for lovers of COZY CRIME!… I loved this book… This is an easily read book but it will keep you on your toes.’ Goodreads reviewer, 5 stars

‘Once I started reading I couldn’t put it down as it was entertaining and enthralling… The mystery was interesting and it kept me guessing till the end… Highly recommended!’ Scrapping and Playing, 5 stars

‘The quintessential cozy mystery… the storyline is fast-paced and engaging… builds to an adrenaline fuelled ending, full of action and powerful imagery. An enjoyable, escapist read that I suspect may become my secret addiction.’ Jane Hunt’s Blog, 5 stars

‘An enjoyable read, with lots of twists and turns… the mystery is one that keeps you reading well into the night. I will certainly look out for more books in this series.’ Goodreads reviewer, 5 stars

‘A page turner and one that kept me up late.’ Goodreads reviewer, 5 stars

‘A lovely, peaceful and funny cozy mystery novel… plenty of very good laugh-out-loud moments… reminded me of Agatha Raisin… I’ll be definitely in the search of other books from this author in future. A perfect cozy mystery!’ Licence to Read, 5 stars 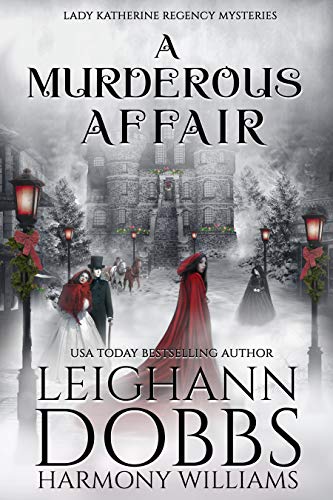 Lady Katherine juggles Christmas festivities, a perplexing cold case and a wager with the annoying Captain Wayland that will prove once and for all which of them is the better detective.

It’s the Christmas season in London, but the holiday festivities don’t deter Lady Katherine from investigating a death that happened months earlier. Since the victim was a maid, investigative resources were sparse, and the police hastily wrote it off as a random killing. But Lady Katherine and her friends believe it was nothing short of premeditated murder, and they vow to seek justice.

With her Bow Street Runner friend Lyle acting as a neutral party, Katherine teams up with her friend Prudence Burwick, her maid Harriett, and of course her pug Emma. Wayland has the aid of Pru’s fiancé Lord Annandale and his valet McTavish.

The two teams race against each other in a hunt for clues that takes them through the servants’ quarters, stables, and seedy underbelly of London in search of a dangerous killer who thinks they got away with murder. 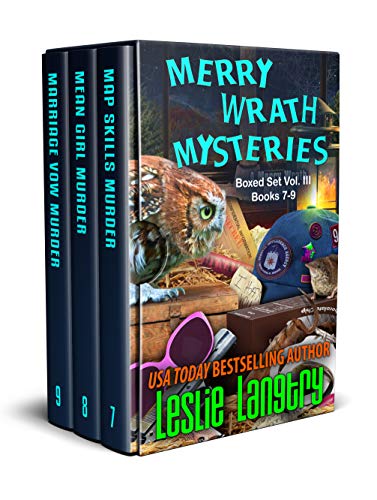 Map Skills Murder – book #7
When ex-CIA Agent turned Girl Scout troop leader, Merry Wrath digs up a treasure map in her yard, she’s sure it leads to a century-old murder and a secret missing treasure. But unfortunately, the investigation of this cold case yields a modern day murder! Are these crimes connected? And more importantly—who has an axe to grind with Merry Wrath?

Mean Girl Murder – book #8
The Halloween Parade is coming up, and former CIA agent-turned-suburbanite Merry Wrath’s Girl Scout Troop hopes to repeat a 1st place trophy for the 3rd year in a row. But when they find a dead woman dressed as a witch, a mysterious treasure, and face a ruthless kidnapping, it looks like Merry’s in for a different kind of triple threat.

Marriage Vow Murder – book #9
When an elderly florist is murdered in the first pew of a church the day before Merry Wrath’s wedding, this ex-CIA turned Girl Scout Troop leader is in big trouble. Which only gets worse when the groom, Rex, vanishes into thin air. Creepy messages, puzzle-like clues, and a the wedding looming…will Merry find her groom in time for a happily ever after?

“Langtry gets the fun started from page one!”
~ Publisher’s Weekly  (Amazon) 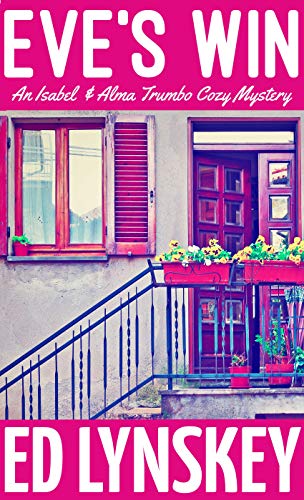 For their tenth mystery, Isabel and Alma Trumbo, the retired sister sleuths living in Quiet Anchorage, Virginia, undertake solving yet another murder mystery. When their friend Eve Palmer phones Isabel to ask for the sisters’ assistance in searching for her lost winning lottery ticket, they drive out to her house and make a shocking discovery: Eve has been slain. Outraged and puzzled, Isabel and Alma put on their detective hats, sharpen their wits, and commence their snooping. Of course, Sammi Jo Garner, their gritty sidekick, and Petey Samson, their irrepressible beagle, help to develop the leads, identify the suspects, and unmask Eve’s killer. The trio of old codgers affectionately known as the Three Musketeers also makes their contributions. The bumbling Sheriff Fox does his best to keep up with them. Told with lots of good humor and funny situations, Eve’s Win is a clean read and traditional whodunit set in a charming Southern small town. Join Isabel and Alma when they set off on solving their latest mystery that is as fun and challenging for them as it is for the reader.  (Amazon)

Angie Turner’s restaurant, The County Seat, is conveniently located near a first-class farmers market—so her menu is full of fresh ingredients. But a visiting culinary professor has just had a taste of something very unhealthy. . .

Angie first meets Daniel Monet at a local mission, where she and her chef-in-training, Hope, are serving barbeque chicken poutine to the homeless. Monet is one of Hope’s teachers—but Angie’s boyfriend knows him from his youthful days in England. But soon, the bon vivant is no longer vivant. When Monet is found dead, with Hope’s prints on the wine glass next to him, it will be Angie who has to sauce out the real killer . . .

“Murder, dirty politics, pirate lore, and a hot police detective: Guidebook to Murder has it all! A cozy lover’s dream come true.” —Susan McBride, author of The Debutante Dropout Mysteries