Here is a list of some of the new releases for the week of April 14th, 2019. I am going to divide the list into 4 days because there are so many of them for this week. Today is the fourth and final day of my list for this week. Hope you find some selections for your weekly reading. Enjoy and happy reading. 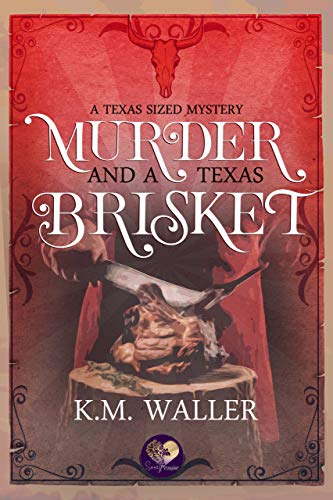 Judging a Texas BBQ competition can be deadly. Read FREE in Kindle Unlimited!

Beatrice O’Rourke and her eccentric friend Marlin plan a Texas getaway to attend a brisket cooking competition. They no sooner arrive when they learn that, just like the song says, everything in the Lone Star State is big and bright, including murder plots!
When one of the judges turns up dead, it’s up to the southern, sassy Beatrice to find the clues and put them together. Can she do it before she and Marlin become the next item on the killer’s menu?  (Amazon) 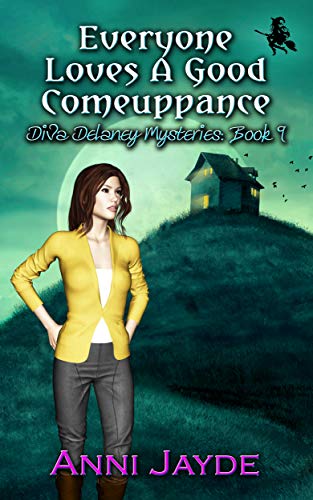 The Delaney Coven has been given the task of taking down Minerva Kensington and her cronies. They’ll have to work with the mysterious person the UK Council of Conjurers have chosen to be their mole. Their mission is to find enough evidence against the councilmembers to have them ousted from their positions.

Diva’s hairdresser has left town unexpectedly and appears to be on the run. It seems Khloe was involved with a dangerous coven who have friends in high places. Their powerful connections might have protected them in the past, but they won’t save them from facing justice forever.

With the curse still hanging over them, Diva and Haydn must find the last of Yvonne Creighton’s remains and destroy them. Even if they manage to accomplish this, they’ll still be bound together. Now that their power has been merged, they’ll never be free from each other completely. The worst part is that Haydn has been involved in Diva’s life for so long that she isn’t even sure if she wants to be free from the man who is supposed to be her enemy.  (Amazon) 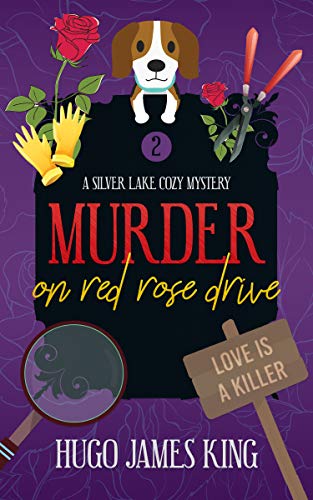 Love is in the air. A body on the ground.
The red rose dealer of Silver Lake is dead.

Every Valentine’s Day, business blooms in the Cotswolds.
And death is bad for business.

An accident or murder?
Will you come out smelling of roses?

Featuring an amateur female sleuth, her rescue dog, a best friend, and a small village of mysteries.
Read Book One: Murder on Silver Lake – NOW  (Amazon) 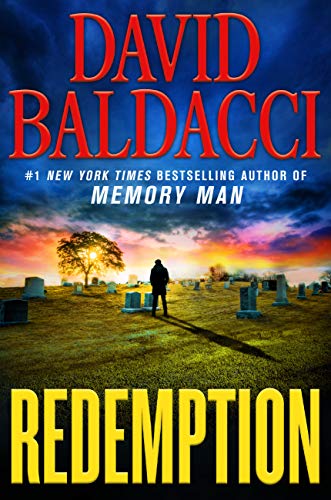 Detective Amos Decker discovers that a mistake he made as a rookie detective may have led to deadly consequences in the latest Memory Man thriller in David Baldacci’s #1 New York Timesbestselling series.

Decker is visiting his hometown of Burlington, Ohio, when he’s approached by a man named Meryl Hawkins. Hawkins is a convicted murderer. In fact, he’s the very first killer Decker ever put behind bars. But he’s innocent, he claims. Now suffering from terminal cancer, it’s his dying wish that Decker clear his name.
It’s unthinkable. The case was open and shut, with rock solid forensic evidence. But then Hawkins later turns up dead with a bullet in his head, and even Decker begins to have doubts. Is it possible that he really did get it wrong, all those years ago?
Decker’s determined to uncover the truth, no matter the personal cost. But solving a case this cold may be impossible, especially when it becomes clear that someone doesn’t want the old case reopened. Someone who is willing to kill to keep the truth buried, and hide a decades-old secret that may have devastating repercussions….  (Amazon)
Editions Available:  Kindle, Hardcover, Paperback, Audiobook 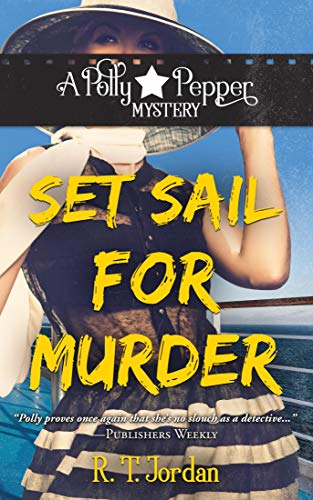 The iconic Polly Pepper, musical comedy superstar of yesteryear, is experiencing a bit of a professional dry spell—she can barely keep her bank account afloat, let alone her career. So, when the nefarious Laura Crawford, scene-stealing former cast mate and perpetual diva, proposes a Polly Pepper Playhouse reunion cruise, Polly is on board, full-steam ahead. But she soon realizes that Hollywood on the high-seas will be nothing short of a shipwreck…

Packed to the gills with has-beens, D-listers, and sycophantic fans, Polly’s celebrity cruise is really a ship of fools, and it’s sinking fast. If that weren’t enough, Polly’s tiny room, troubling lack of champagne, and mandatory appearance schedule leave her feeling more than a little murderous towards Laura. Unfortunately, that ship already sailed! Laura is found dead the next morning, slain by Season Six of The Polly Pepper Playhouse box set—the collector’s DVD ruthlessly sharpened to a razor’s edge.

Polly immediately begins fishing for clues, and her first big catch is pianist-at-sea Lawrence Deerfield, whose career sank when Laura maliciously cut him from a recent stage production. But Polly will have to cast a wider net to catch this killer—with a ship’s worth of burned cast mates, spurned lovers, and obsessed fans there are plenty of other motives in the sea.

When Polly herself is accused of the crime she knows it’s time to shape up or ship out. If she can’t solve this maritime mystery, the clever killer could send Polly’s whole career—and even her life—overboard.  (Amazon) 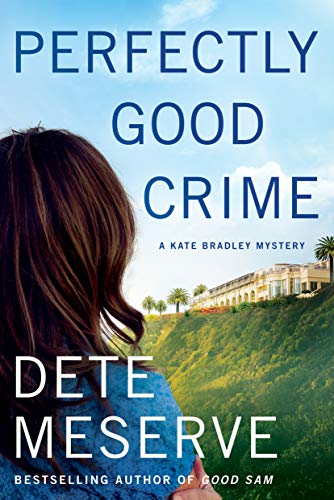 n this feel-good follow-up to the novel and Netflix film Good Sam, intrepid reporter Kate Bradley is back in a story that BuzzFeed calls “mysterious, fascinating, and inspiring.”

When burglars target the palatial estates of American billionaires in a series of high-tech heists, Kate must venture inside the world of the superrich to investigate the biggest story of the year.

But the answers don’t come easy. The Los Angeles police detective who’s helping Kate with the case has mysteriously disappeared, Kate’s senator father demands she stop investigating, and the billionaire victims refuse to talk to the media. Still, Kate uncovers clues that prove the crimes are anything but ordinary: those behind the robberies have shocking—but uplifting—motives that just may bring about powerful change.

As the heists escalate, Kate faces a momentous decision that could jeopardize her deepening relationship with fire captain Eric Hayes. Saddled with obligations to the public, her career, and her own heart, Kate must trust her instincts in a high-stakes search that will test everything she believes and force her to decide where she belongs. 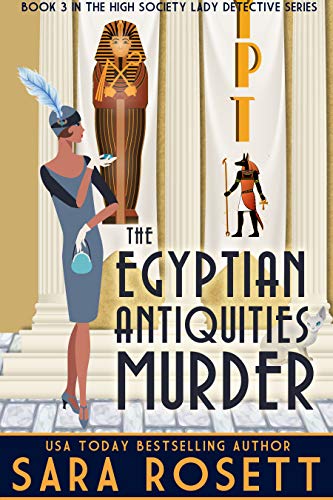 October, 1923. Lady detective Olive Belgrave has a new case. Lady Agnes doesn’t believe in curses—especially ancient curses—and she hires Olive to prove her uncle wasn’t the victim of a malevolent mummy. Olive investigates and discovers the truth is much worse—it’s murder. Can Olive debunk the curse and reveal the true culprit before the mummy curse claims another victim?

Things are going well for Kat Stanford; not only is her antiques business thriving, she’s also got a new date: Piers Carew, Viscount Chawley, who owns the estate next to Honeychurch Hall.

Unfortunately, Kate has a rival. Impossibly beautiful Cassandra Bowden-Forbes is also in town, conducting valuations at the same fairs as Kat – and she makes no secret of the fact she’s got her eye on Piers . . .

And then things start to go wrong: Kat finds herself at the scene of not one but two mysterious deaths, and local tongues are wagging – is it coincidence, or murder? As Kat’s fortunes nosedive it becomes clear that unless she can solve these unexplained deaths then she may just be the victim of the next accident . . .

‘Just the thing to chase the blues away’ M. C. Beaton

‘The perfect classic English village mystery but with the addition of charm, wit and a thoroughly modern touch‘ Rhys Bowen 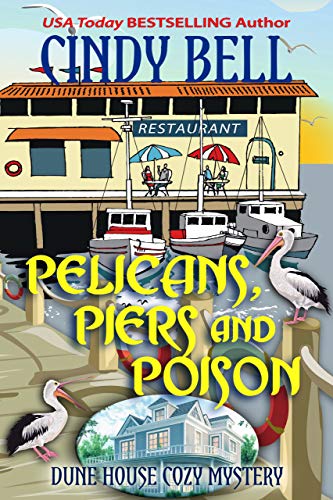 Best friends, Suzie and Mary, love running Dune House, their majestic bed and breakfast on the beach. With their trusty, energetic Yellow Labrador, Pilot, by their side they are enjoying the new opportunities that being in their fifties have presented them. Their lives are full of friendship, romance, a business they love to run together and experiencing what the beautiful, small seaside town of Garber has to offer.

But when someone is murdered amongst a group of people and one of the prime suspects is staying at the B&B, Suzie and Mary decide to lend a helping hand to the investigators and do a little snooping of their own. But their investigations uncover some secrets about the locals and lead them down a path of discovery they prefer would have remained hidden.

Will Suzie and Mary find that the murderer is too close for comfort? Has the best friends’ luck finally run out and they have bitten off more than they can chew?  (Amazon) 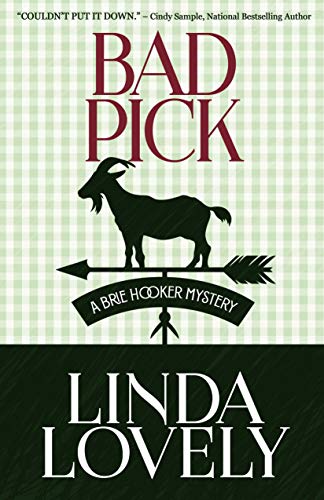 Believing one of the zealots might be persuaded to see reason, Brie’s free-wheeling friend Mollye convinces her they should call on the young woman. Big mistake.

Picketers at Udderly’s gates soon become the least of Brie’s troubles. Not only is she accused of murder, she worries the death might actually be her fault. Danger mounts when an old family friend’s visit ensnares Brie in a high-stakes feud between a U.S. Supreme Court nominee and the woman determined to expose his secrets.

In her personal life, Brie’s still torn between the town’s two most eligible bachelors. While she’s edging toward a decision, she must first survive a cunning killer adept at crafting murders that look like tragic accidents.

Will Brie be another “accident” victim? Pay a visit to Udderly Kidding Dairy and find out!

BAD PICK by Linda Lovely | A Henery Press Mystery. If you like one, you’ll probably like them all.   (Amazon)