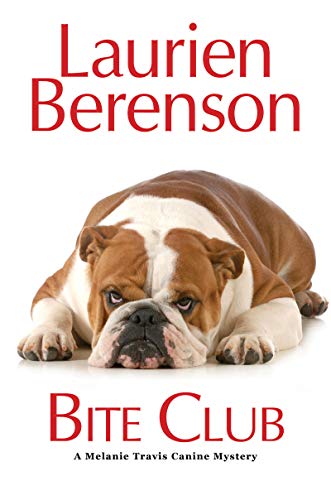 Thanks to Aunt Peg and her enthusiastic pedigree dog show pals, Melanie’s aptly named Bite Club reading group has book lovers all over town burying their noses in thrilling murder mysteries. But another pet project surfaces when Melanie reluctantly agrees to train a Bulldog puppy for elusive member Evan Major. Between the unusual bruise on his face and a bizarre run-in with an unknown dog show attendee, introverted Evan can’t dodge trouble. It even sends him to an early grave–while landing Melanie in the hot seat for homicide . . .

Caught at the wrong place at the wrong time, Melanie delves into the victim’s shady past to prove her innocence. As she uncovers a juicy scandal that cost Evan his marriage and, possibly, his life, Melanie realizes that booking the real culprit comes down to gathering her pack of suspects together at the next Bite Club meeting. What she doesn’t know is Aunt Peg has been hiding some explosive secrets of her own–secrets that, once unleashed, could pit Melanie against an unpredictable killer bent on bringing this story to an abrupt end . . . (Goodreads)

The writing style flows smoothly and it defines the characters very clearly by their actions and words. The descriptive writing of the author had me feeling like I was in Connecticut, watching all of the action taking place and listening in on conversations. And the descriptions from the dog shows had me feeling like I was right there, watching the behind-the-scenes action. I watch dog show on television whenever they are on, and it was fun to get some insight into their world.

The characters are well rounded and well rounded. Melanie is a funny, caring hardworking mom who has a lot going on in her life. But somehow she is able to juggle everything. I enjoyed getting to spend time with Melanie and her family and friends. I enjoy when the protagonist has a family, to me it makes them see more realistic. Aunt Peg is a real pill, but in her own way, she loves Melanie and her family.

The mystery was well plotted and moved along at a nice pace. There were enough clues to sift through and suspects to consider and it was not easily solved. And there was another mystery to solve involving her friend Terry, which I enjoyed reading about.

I would recommend this book to anyone who enjoys a well crafted cozy mystery. If you enjoy animals in your cozy and you like dog shows, this is definitely for you.