Here is a list of some of the new releases for the week of July 7th, 2019. I am going to divide the list into 4 days because there are so very  many of them for the week. Today is the fourth and final day of my list for this week. Hope you find some selections for your weekly reading. Enjoy and happy reading. 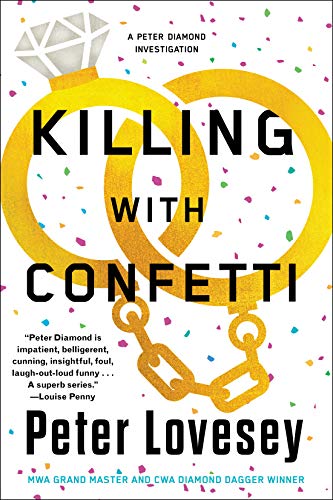 As a New Year begins in Bath, Ben Brace proposes to his long-term girlfriend, Caroline, the daughter of notorious crime baron Joe Irving, who is coming to the end of a prison sentence. The problem is that Ben’s father, George, is the Deputy Chief Constable. A more uncomfortable set of in-laws would be hard to imagine. But mothers and sons are a formidable force: a wedding in the Abbey and reception in the Roman Baths are arranged before the career-obsessed DCC can step in.

Peter Diamond, Bath’s head of CID, is appalled to be put in charge of security on the day. Ordered to be discreet, he packs a gun and a guest list in his best suit and must somehow cope with potential killers, gang rivals, warring parents, bossy photographers and straying bridesmaids. The laid-back Joe Irving seems oblivious to the danger he is in from rival gang leaders, while Brace can’t wait for the day to end. Will the photo session be a literal shoot? Will Joe Irving’s speech as father of the bride be his last words? Can Diamond pull off a miracle, avert a tragedy and send the happy couple on their honeymoon?  (Amazon) 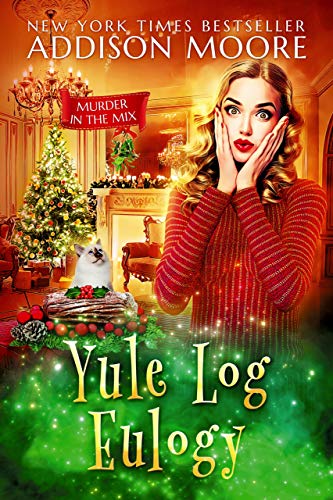 A baker who sees the dead. One too many suitors.
And a killer. Living in Honey Hollow can be murder.

*A laugh out loud standalone cozy mystery by New York Times Bestseller Addison Moore* All books in the series can be read individually but are best enjoyed in order.

My name is Lottie Lemon, and I see dead people. Okay, so I rarely see dead people, mostly I see furry creatures of the dearly departed variety, aka dead pets, who have come back from the other side to warn me of their previous owner’s impending doom.

The holidays are upon us, Christmas day is within reach and there are so many parties to cater. The very first one is on the ritzy side of town, and if the snobby socialites weren’t enough to make me squirm, stumbling upon a body takes the joy right out of the season. But I’m determined to find the killer and salvage what I can of this holiday fiasco. However, with the ghost of a reindeer who happens to have a hankering for whiskey, and a convict on the loose, it’s going to be tougher than it looks. To top it all off, I’m quickly burying myself in an avalanche of lies.

The snow is falling, the sugar cookies are baking and mistletoe abounds. The holidays have hit Honey Hollow. And it’s beginning to look a lot like murder.

Lottie Lemon has a brand new bakery to tend to, a budding romance with perhaps one too many suitors, and she has the supernatural ability to see dead pets—which are always harbingers for ominous things to come. Throw in the occasional ghost of the human variety, a string of murders, and her insatiable thirst for justice, and you’ll have more chaos than you know what to do with.

Living in the small town of Honey Hollow can be murder.   (Amazon) 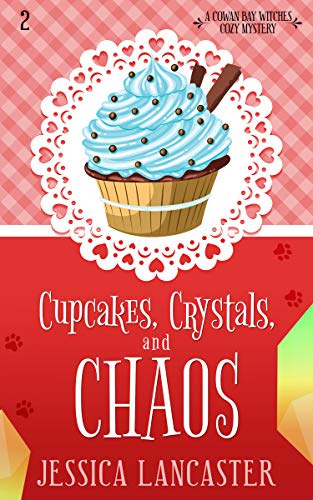 When a dead man is found on the Cowan Bay shores, Doctor Oscar Raymond reveals the man choked on a crystal – a witch’s crystal.

With fingers pointed at them in all directions, the Cowan Bay coven realise the odds aren’t in their favour. Add the appearance of another witch, Gwen’s mother, and it becomes too coincidental for Detective Hodge.

It’s a race against time to find out the truth before someone is imprisoned for a murder they didn’t commit.

A paranormal cozy mystery set in a coastal English village. An amateur female sleuth, a coven of witches, and an anxious pet cat. Written in British English. No swearing or gore. *previously published under Crystal Cafe* 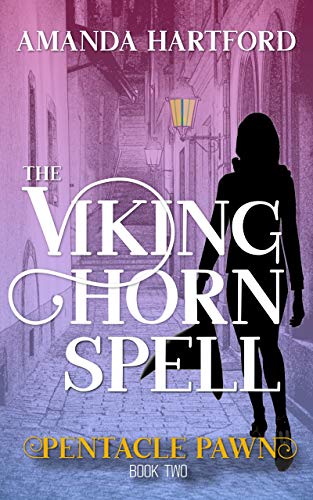 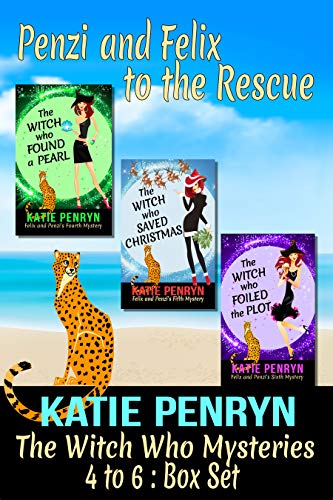 As ever, her handsome sidekick, Felix the shape shifting leopard, is here by her side to lend support and protection.

Just when Penzi thought she could take life easy and settle down with her two brothers in the little French seaside town of Beaucoup-sur-mer, the powers of wickedness and greed strike the human heart again.

The Witch who Found a Pearl – Penzi thinks herself lucky when she finds a beautiful pearl in her lunchtime oyster. Her friend Izzy suggests they visit the oyster farm from which the pearl came. She has no idea she is launching Penzi and Felix on a perilous investigation into the murky history of a region torn by war throughout the ages.

Penzi’s self-confidence falters when she stumbles upon a second dead body, but with Felix and her friends Izzy and Garth beside her, she adds the wisdom her lucky pearl brings her to her developing skill as a white witch and surges ahead in her determination to bring the perpetrators to justice.

The Witch who Saved Christmas – Penzi and Felix are once again called upon in the fight of good against evil. This time it’s Christmas Eve. A vile and evil monster is trying to sabotage Santa’s delivery of Christmas presents to the children of the world. Penzi wants to stay home and have a family dinner, but Felix reminds her that a witch has to do what a witch has to do. Of course, Penzi does what she has to do with the help of the High Council of the Guild of White Witches.

(This story was written for the Christmas season 2016 and is not a true cozy mystery as there is no murder. It is rather a tale of how-to-do-in a nasty monster and is suitable for reading to or with children. However, the vocabulary is set at an adult level so children may need some simplification, which in itself leads to interaction between parent and child at Christmastime. The royalties for the first eight months were donated to UNICEF for the children of Syria.)

The Witch who Foiled the Plot – At last Felix can keep Penzi out of danger. Or can he? With enough to live on for the rest of their lives, they no longer need to work for a living. However, when evil comes knocking at the door again, Penzi once more has to choose whether to take up the fight for good or rest on her laurels.

Her new friends who own vineyards and a distillery in Cognac have fallen foul of the powers of greed and wickedness. Well, you know our Penzi. What do you think she’ll do? Let it go, or throw herself into the battle?

It’s here at last – the second box set you’ve been waiting for.

If you love stories about witches, magic, and talking cats and dogs, all spiced up with a dollop of danger, you’ll love following along with Penzi and Felix as they fight the good fight against evil in the little French seaside town of Beaucoup-sur-mer.

Available in Kindle Unlimited – Download these three great stories now and get comfy, because once you start reading these exciting adventures you won’t want to put them down.

(All three are stand-alone novels, but your enjoyment will be enhanced by reading the series in order.)  (Amazon) 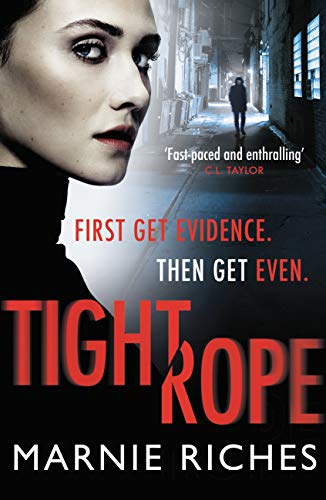 What happens when a private investigator ends up being the one uncovered?

Having lost everything after a failed marriage, Beverley Saunders now lodges in the basement flat of a house owned by her best friend Sophie and her husband, Tim. With Bev’s former glittering marketing career in the gutter, she begins to do investigative work for other wronged women, gathering dirt on philanderers, bosses and exes.

But when Beverley takes on the case of Sophie’s friend Angela, who is seeking to uncover grounds for divorce from her controlling husband, Jerry, the shadow Science Minister, she soon discovers that she isn’t the only one doing the investigating…

Beverley has a secret history she doesn’t want coming out – but will she manage to stay hidden long enough to give Angela the freedom she deserves?

Marnie Riches is back in this darkly comic thriller, perfect for fans of Martina Cole and Kimberley Chambers.

‘Marnie Riches is already a leading light in the field of Mancunian noir.’ The Guardian

‘Gritty and great fun.’ The Express

‘Pacy, poignant, funny and violent, it grabs you by the hand and drags you down the mean streets of Manchester with such verve and authenticity that you can almost smell the rain and blood as you turn the pages.’ Simon Toyne 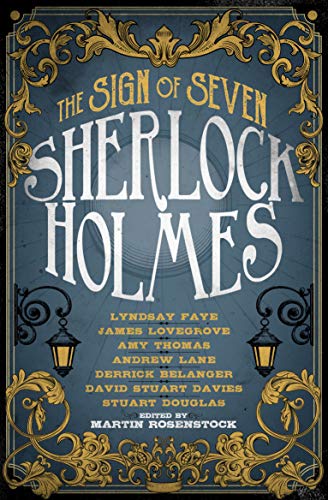 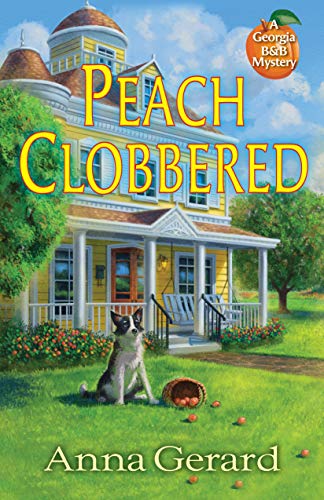 What’s black and white and dead all over? Georgia bed and breakfast proprietor Nina Fleet finds out when she comes across a corpse in a penguin costume.

Nina Fleet’s life ought to be as sweet as a Georgia peach. Awarded a tidy sum in her divorce, Nina retired at 41 to a historic Queen Anne house in quaint Cymbeline, GA. But Nina’s barely settled into her new B&B-to-be when a penguin shows up on her porch. Or, at least, a man wearing a penguin suit.

Harry Westcott is making ends meet as an ice cream shop’s mascot and has a letter from his great-aunt, pledging to leave him the house. Too bad that’s not what her will says. Meanwhile, the Sisters of Perpetual Poverty have lost their lease. Real estate developer Gregory Bainbridge intends to turn the convent into a golfing community, so Cymbeline’s mayor persuades Nina to take in the elderly nuns. And then Nina finds the “penguin” again, this time lying in an alley with a kitchen knife in his chest.

A peek under the beak tells Nina it’s not Harry inside the costume, but Bainbridge. What was he doing in Harry’s penguin suit? Was the developer really the intended victim, or did the culprit mean to kill Harry? Whoever is out to stop Harry from contesting the sale of his great-aunt’s house may also be after Nina, so she teams up with him to cage the killer before someone clips her wings in Peach Clobbered, Anna Gerard’s charming first Georgia B&B mystery.  (Amazon)