Here is a list of some of the new releases for the week of July 21st, 2019. I am going to divide the list into 4 days because there are so very many of them for the week. Today is the fourth and final day of my list for this week. Hope you find some selections for your weekly reading. Enjoy and happy reading. 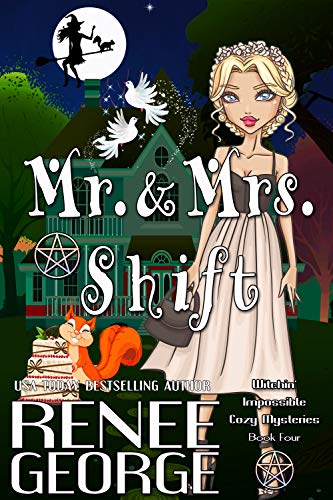 A witchy bride. An itchy groom. A flower girl squirrel. And a dead wedding planner. Why is nothing ever easy in Paradise Falls.

Witch Hazel Kinsey is finally marrying the love of her life, werebear Ford Baylor, in a ceremony that will bind their souls for life.

Unfortunately, party crashers have other plans for the anxious bride. Like killing her before the ceremony. Haze and Ford, with the help of Tizzy the squirrel, and Lily Mason are determined to track down the killer and make the midnight deadline, but if they can’t stop the person behind the bounty on Haze’s head, the wedding may be off. Permanently.

What’s a Witchzilla to do when everything on her special day goes wrong? Everything she can to make sure she doesn’t lose her one shot at true happiness.

For Hazel and the gang, it’s just another day in Paradise Falls.  (Amazon) 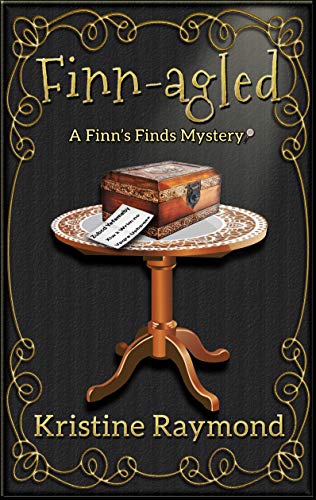 A secret message hidden inside of an antique wooden box, an unidentified dead body, and a mother determined to marry her off to the high school crush whom she hasn’t seen since…well…high school. There’s no doubt about it; Finn Bartusiak’s life in the seaside town of Port New is about to get interesting.

Coming into possession of a 19th-century, bronze and mahogany writing box under somewhat suspicious circumstances, Finn’s accidental discovery of a coded note leads her and Spencer Dane, bestselling novelist and love of her life (though he doesn’t know it yet), on a quest to unravel the mystery behind the jumble of letters. But they’re not the only ones interested in the cryptic message. There’s a con man on their trail, and he’ll stop at nothing, including murder, to claim the ‘treasure’ for himself.   (Amazon) 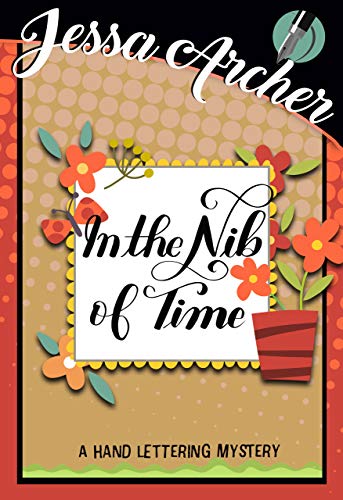 Ralph Coggins has been one of Jamie Lang’s mentors and friends for years. A world-renowned master penman and calligrapher to queens and presidents, his script is perfection. So perfect that someone wants him out of the way. When Jamie stops by Ralph’s house to deliver the 24K gold fountain pen nib he ordered, she finds him slumped over his drafting table, freshly dead. It takes her good friend with the bedroom eyes, Ridge Calhoun, Cedar Valley’s chief of police and hottest bachelor, to determine what killed Ralph. And the cause of death is almost unbelievable. Now the question is—who killed Ralph? And how did they do it?

Ralph was well loved and respected in the lettering community. So Jamie thought. Until she finds herself embroiled in a world full of jealousy, secrets, revenge, unrequited love, and greed. Even some of Ralph’s powerful and wealthy clients have motives for wanting him dead. And it isn’t because they can’t pay. As Jamie sifts through the clues, consuming copious amounts of coffee, she enlists the help of her rival hand letterer, Hot Hugh. With his sexy British accent and tight black T-shirts, it’s hard not to be distracted by him. Now the only question is whether Jamie can find the killer in the nib of time. Before they still her pen for good.

If you enjoy cozy mysteries with something new, or if you’re a fan of hand lettering, pen and ink art, graphic design, watercoloring, typography, calligraphy, and creative inspiration, this series is for you! Indulge your inner artist and sleuth. Welcome to Cedar Valley, a thriving tourist town and popular wedding venue. Once you slip into town, you’ll want to stay and grab a cup of coffee with Jamie while she solves crimes.  (Amazon) 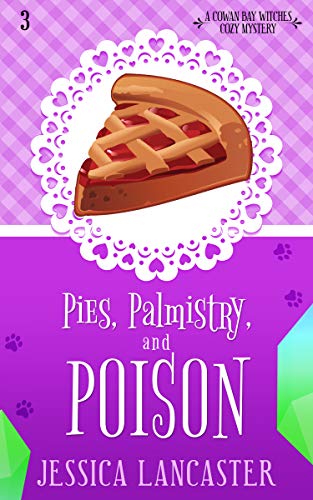 Celebrity chef, Nigel Whisker is a controversial television personality, so it’s no surprise someone had it out for him… which means nobody is safe from speculation, including three-time winner Gwen Waterhouse.

Detective Hodge wants to sweep the crumbs of this death under the rug with an easy arrest, but Gwen has other plans. Pies, palmistry, and poison, oh my!

Will proof be in the pudding?

A paranormal cozy mystery set in a coastal English village. An amateur female sleuth, a coven of witches, and an anxious pet cat. Written in British English. No swearing or gore. *previously published under Crystal Cafe cozy series* 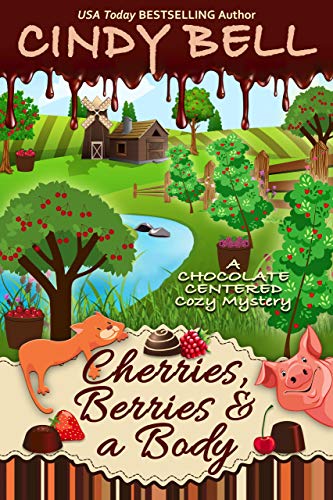 Charlotte and Ally Sweet are excited to be visiting a nearby farm to try a new range of jams to use in their baked treats. They take their trusted companions, Peaches and Arnold, along for the outing. The animals are enjoying the farm and the jams are delicious…. but not everything goes to plan.

Their fun day out comes to a grinding halt when Arnold and Peaches land up in a sticky situation….and then someone ends up murdered. Charlotte and Ally do a little sleuthing and reveal that the victim has some surprising secrets, and quite a few enemies. When someone they love dearly is put at risk, Charlotte and Ally will do anything to ensure their safety.

Will Charlotte and Ally find the culprit before tensions reach boiling point and there is another victim?

The deadly dimensions over London have been sealed, and the monsters have departed. But word has come to Sherlock Holmes and Dr. Watson of a more terrifying creature still – the great Cthulhu has been sighted off the waters of Innsmouth, Massachusetts. Only Holmes can defeat him.

And in the muddy village of Innsmouth, surrounded by villagers who are more sea-monster than human, Holmes meets again his nemesis, Moriarty, and yet greater foes: Amelia Scarcliffe and Maria Fitzgerald, harbingers of Dagon, who have called forth Cthulhu. Their task: to bring about the end of humankind, and begin the realm of nightmares on Earth.  (Amazon) 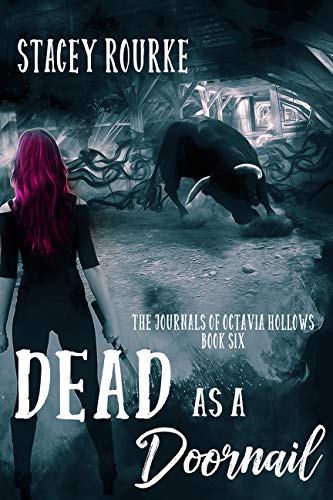 With a touch of her hand, Octavia Hollows can restore life. Yet, she couldn’t save the man she loved from the horrific accident that stole him from her. Octavia thought she could outrun the pain, but ghosts from the past refuse to be silenced. Out of options, she chooses to retrace her wayward journey across the country in search of answers. Surrounded by baffling mysteries of the undead, what she learns about herself along the way might become her greatest weapon.

Tallahassee, Florida: Where the love of her life died.

Octavia’s coven has gone missing, and a demented stalker is sending her body parts in the mail. Tired of playing along with his twisted games, the pink-haired necromancer and her swinekick are preparing for war. But this is one battle she won’t face alone. Friends, both living and deceased, will rise to stand beside her. Will it be enough to end the creeper’s murderous vendetta? Or, will death come for the one person Octavia can’t resurrect… herself?   (Amazon) 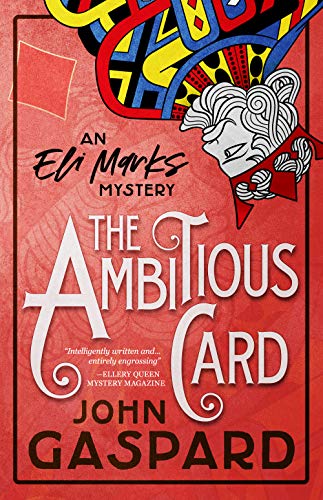 “This is a hugely entertaining crime novel, packed full of comedy….Warm, funny and well-plotted–a book to brighten any grey day. Do read it!” – FictionFan’s Book Reviews

“The Ambitious Card is a must read!” – Books and Looks

“Before I had even finished the first chapter I had fallen in love with Eli. He is intelligent, sensitive, witty and, suddenly, the main suspect in a series of murders…well written, fast paced and exciting.” – The Frugal Mennonite

“The deftly-plotted mystery is enriched by Eli’s relationships with his ex-wife, her new husband, his old-school stage magician Uncle Harry, and an interesting collection of people and places in and around St. Paul…This stylish novel is filled with interesting details, snappy dialogue, and appealing characters.” – More Than a Review

“This story is very well written and fun to read. I would definitely read another Eli Marks Mystery!” – A Simple Taste for Reading

“I had a great time reading The Ambitious Card. I don’t read many series, but I’m definitely willing to go on another adventure with Eli.” – The Writerly Reader

“Well, Dear Reader, would I recommend The Ambitious Card? Would I read another Eli Marks mystery? Yes, I would do both.” – Charlie Britten, Write On

The life of a magician isn’t all kiddie shows and card tricks. Sometimes it’s murder. Especially when magician Eli Marks very publicly debunks a famed psychic, and said psychic ends up dead. The evidence, including a bloody King of Diamonds playing card (one from Eli’s own Ambitious Card routine), directs the police right to Eli.

As more psychics are slain, and more King cards rise to the top, Eli can’t escape suspicion. Things get really complicated when romance blooms with a beautiful psychic, and Eli discovers she’s the next target for murder, and he’s scheduled to die with her. Now Eli must use every trick he knows to keep them both alive and reveal the true killer.  (Amazon) 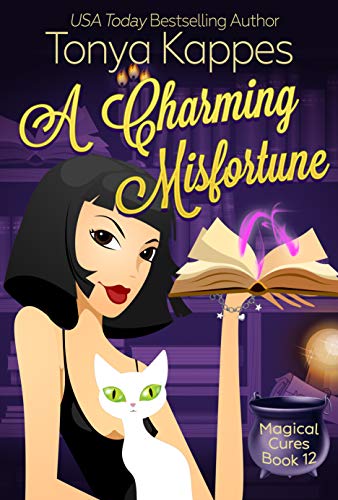 Welcome to Whispering Falls, where magic and mystery collide.

Summer in Whispering Falls is in full swing.

When a local Audubon Society hears a very rare and nearly extinct bird species is seen in Whispering Falls, in Petunia Shrubwood’s head of hair of all places, the society comes to Whispering Falls bound and determined to find the rare bird.
Petunia will go to any lengths to keep her animals safe…after all, they are the lost souls of those who have passed.

The Karima sisters are haunted by a ghost that demands they help him cross to the other side, only the ghost’s human form is not dead…yet.

And troubles double…
After one of the Audubon Society members is found dead, Petunia Shrubwood becomes the number one suspect.

June Heal is going to have to use some very special magic if she’s going to get Petunia off the hook before another person in the Audubon Society becomes extinct…like the bird they are hunting.  (Amazon)