Here is a list of some of the new releases for the week of December 15th, 2019. I am going to divide the list into 4 days because there are so very many of them for the week. Today is the fourth and final day of my list for this week. Hope you find some selections for your weekly reading. Enjoy and happy reading. 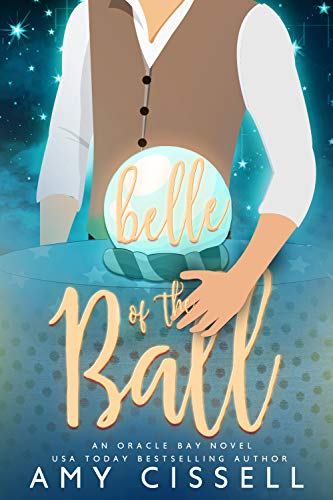 Welcome to Oracle Bay, the town where the local psychics were already expecting you!

Oracle Bay has always attracted the preternaturally clairvoyant. When anyone with seers’ blood in their veins steps foot in this quaint coastal town, their powers awaken. They receive a visit from the Psychics Union and shenanigans ensue.

Drew Hardy, the local crystal ball reader, is recovering from the latest apocalypse by making eyes at his ex-boyfriend, Bill; he’s hoping a rekindled romance is in his future. Instead, a pair of mischievous kittens arrive in the middle of the night and usher in post-holiday chaos. When a series of crimes—both petty and serious—start plaguing Oracle Bay, Drew channels his favorite fictional detectives, dons his deerstalker, and sets out to discover who is driving up the crime rate in this sleepy oceanside village.

Is it Dio—the attractive playboy and Drew’s rebound fling—who’s back in town after three years’ absence? Or Martha, who always knows what’s going on before anyone else? Or, is it Ryan, who believes the town’s psychics bring a bad element into town?

With their powers on the fritz and an unusual party atmosphere permeating the town, the psychics are having a difficult time getting to the bottom of it. Will Drew figure out who’s to blame before anyone else is hurt? And will Bill finally let go of past hurts and let himself have a happily ever after?

Belle of the Ball is a paranormal mm romance and cozy mystery. There’s no sex or violence on the page.  (Amazon) 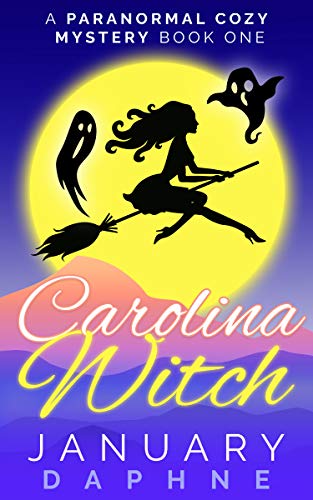 A haunted mountain lodge, a dark family secret, and a snarky dog who won’t shut up…

Newly single, city-dwelling Natalie Miller travels to a remote lodge in Western North Carolina to make arrangements for her estranged aunt’s funeral and to sell the mysterious property that was left to her.

Once there, Natalie encounters a wise-cracking dog who insists on being her loyal companion, a handsome horror screenplay writer well versed in all the supernatural folklore of Wolf Mountain, and the ghost of her Aunt Martha Wilder who tells Natalie that she is the only one who can solve the mystery of her untimely death.

Turns out, a haunted mountain lodge is not all Natalie inherited from her Aunt Martha. She learns that with her aunt’s passing, Natalie has become the next witch in line to wield the magical power of the legendary Wilder Coven.

Will she reject her birthright and go back to her old life, or will she stay and unmask the monster who cut aunt’s life short?

And don’t miss out on the next two installments in this Cozy Mystery series full of supernatural thrills and chills coming soon! 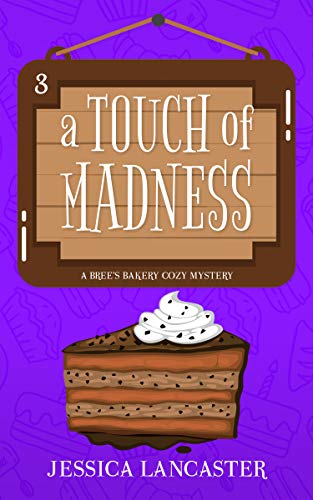 A man, claiming to be Bree’s husband arrives at the bakery, distraught and demanding to see his wife. But Bree was never married… or so she claimed, and now everything she said is being questioned.

Ten years ago, Bree had a different life altogether. Now past mistakes are coming back to haunt her, and they’re bringing out all the skeletons. She’s the talk of the village, and everyone wants to know what Bree did all those years ago.

Will Bree manage to help the mystery man? Or will he stay and cause chaos?

A cozy mystery short story that can be read in two hours. Served perfectly as a light read. Set in a sleepy village and featuring a bakery-owning amateur sleuth and her friends.

Written in British English. No cliffhanger, swearing, or gore.  (Amazon) 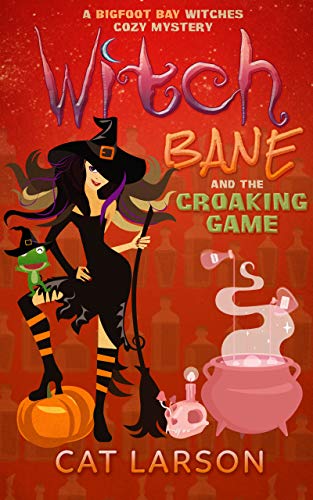 Someone is poisoning the townspeople of Bigfoot Bay.

And everyone’s a suspect… including the frog.

** Witch Bane and The Croaking Game is the third book in the Bigfoot Bay Witches cozy mystery series. More secrets will be revealed. More magic will be uncloaked. **  (Amazon) 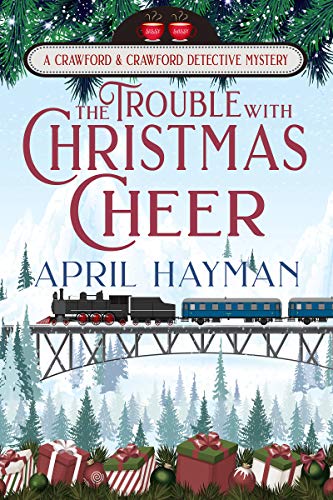 Sissy and Sassy Crawford – septuagenarian detectives and identical twins – are taking the brand-new and very exclusive train – the Ozark Express – home for the holidays. While scrumptious food, comfortable accommodations, and delightful entertainment are the order of the day, murder is not. So, when it appears that one of the wealthy passengers has been murdered with spiked wine, the train’s owner is desperate to keep his new venture from derailing. His only choice is to ask the Crawford twins to step in and solve the case. Can they do it before rescue shows up and creates a marketing nightmare? Or will they have trouble with some Christmas cheer too?  (Amazon) 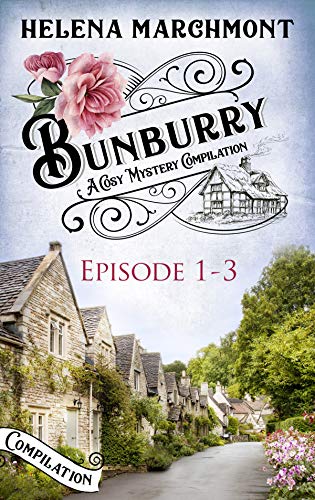 Miss Marple meets Oscar Wilde in this new series of cosy mysteries set in the picturesque Cotswolds village of Bunburry. Here, fudge-making and quaffing real ale in the local pub are matched by an undercurrent of passion, jealousy, hatred and murder – laced with a welcome dose of humour.

MURDER AT THE MOUSETRAP

Alfie McAlister has retreated from London to the peace and quiet of the country to recover from a personal tragedy. But an accidental death – which may have been no accident – reveals that the heart of England is far from the tranquil backwater he imagined. After arriving in Bunburry, he is co-opted as an amateur detective by Liz and Marge, two elderly ladies who were best friends with Alfie’s late Aunt Augusta. And it is not long before their investigations take an even more dramatic turn …

Alfie discovers that he has not only inherited a cottage from his late Aunt Augusta but also a 1950s Jaguar. He is dismayed: for reasons of his own, he no longer drives. Aunt Augusta’s best friends, Liz and Marge, persuade him to get behind the wheel again – but that’s just the start of his Troubles …

A TASTE OF MURDER

When a local beef farmer is found dead, Betty Thorndike – vegetarian and Bunburry’s only Green Party member – is in the frame. Despite what everyone thinks, Betty is absolutely not Alfie McAlister’s girlfriend. But Alfie knows what it’s like to be wrongly accused, and enlists the help of his fellow amateur detectives, Liz and Marge, to find out who’s responsible. There’s just one problem about a farm-based investigation – Alfie’s scared of cows … 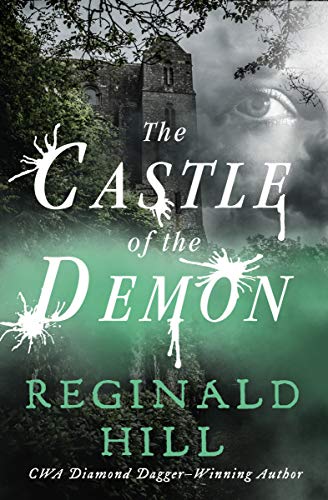 A woman on the run from her husband encounters danger in a seaside town: “An eminently likable heroine . . . a highly clever ending” (Booklist).

Emily Salter is once again using her maiden name, living with her dog in a town along northern England’s coast that she remembers fondly from childhood holidays. Her intention was to get far away from her controlling and threatening husband. Here, she’s found some refuge, even met a nice gentleman, though she’s not anxious to jump into another relationship.

But her new home is not as peaceful as it appears on the surface. Spies lurk in its remote corners—and a dead body lurks under the water. To Emily’s shock, she is beginning to suspect that the intrigue has something to do with her—as well as the man she thought she left behind—in this suspenseful mystery by a Diamond Dagger–winning author who “delivers literate, complex, and immensely satisfying thrillers”( Orlando Sentinel).

Also published under the title The Turning of the Tide.  (Amazon) 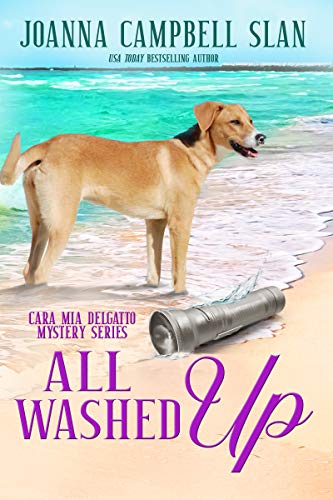 Cara Mia thought she found a sculpture of a mermaid in the sand…and then it moved! Rescuing a half-drown immigrant was not what she wanted on her morning walk.

Stuart, Florida. Was it the right thing to do? Will the woman survive? And if she does, will she be okay? Or was she better off dead? And where are all the other immigrants who made the perilous ocean voyage with her?

Someone is behind all these beached landings of immigrants. Cara might have uncovered a human trafficking scheme. To trace these soggy deaths back to the source will take every bit of Cara’s courage, plus a lot of help from her cranky grandfather. And then her son gets involved.

Suddenly it’s Cara’s family that’s at risk as a run-in with deadly coyotes threatens to destroy everything and everyone Cara loves. How could one good deed go so badly wrong?

Tear Down and Die is the charming third novel in the Cara Mia Delgatto cozy mystery series. If you like witty heroines, ripped-from-the-headlines plots, and a generous helping of Florida’s beautiful Treasure Coast, you’ll adore Joanna Campbell Slan’s captivating tale.

Buy All Washed Up and escape to Florida with a romantic, crafty, get-away today! 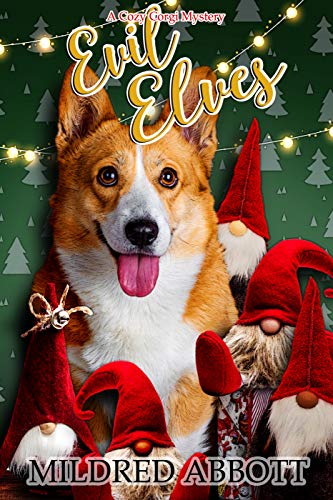 Christmas ushers in snowstorms, fruitcake, and a horde of Santa’s naughty elves…

No place is more perfect for the winter holidays than the charming mountain town of Estes Park. As the Cozy Corgi Bookshop and Bakery glistens with lights and garlands, Winifred Page allows the seasonal merriment to brush away all worry and fear. Watson, her grumpy corgi, is about as far from stressed as possible—after all, with the holiday baking, delectable crumbs are everywhere.

Estes Park’s new Christmas store is chosen to receive exclusive rights to sell a much-coveted collection of tiny elf figurines, but not everyone is thrilled, especially not the owner of the original Christmas shop. Bickering between local merchants is nothing new and doesn’t dampen the Christmas cheer or holiday glee. However, when nightly break-ins begin to occur, Santa himself is caught in the act, Fred and Watson are pulled away from the bookshop to investigate the holiday mayhem.

Unfortunately, while Santa keeps a list of nice and naughty children, he’s allowed his elves to have free rein, and there’s nothing nice about them…