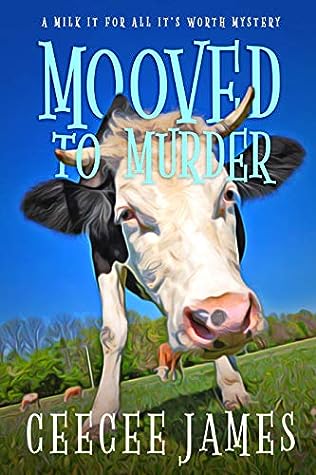 “Mooved to Murder was one of the best books I have read in 2019!”Chelsea Lawson is a ride-or-die friend. When her best friend Tilly asked her to stay at her place to watch her six-year-old daughter and pets for a while, Chelsea didn’t hesitate to say yes. What she didn’t realize was that “Tilly’s place” was a micro-farm and “a few pets” included a cow and two goats as well as a child who was too smart for her own good.

Chelsea was already in over her head before the dead body turned up.

When the local community, instead of offering support, tries to run her out of town, Chelsea suspects something is going on. Something big and rotten. The mayor makes it clear she’s not wanted and the townspeople give her the cold shoulder, but that only makes Chelsea more determined to uncover their secrets.
But no one expected the repercussions those secrets would have, especially Chelsea. Now life on the farm is hanging in the balance. Will Chelsea ever be able to wake up from this nightmare?  These cozy mysteries are wrapped up by the end of the book even as Chelsea’s life continues on to the next. Sweet, clean, funny reads with a little suspense and a lot of animal cuddles thrown in make these mysteries a fan favorite.Next in the series- Farmer in the Dead (Goodreads)

The characters were well developed and well rounded. I really enjoyed getting to know Chelsea, she seemed very down-to-earth to me. I could imagine her being my friendly helpful neighbor. I really enjoyed the fact that she did not rush head first into an investigation and put herself in harm’s way. She has her hands full trying to take care of her friend’s six year old daughter, Emma, and all of the farm animals. There were lots of funny moments with Chelsea and the animals, it had me laughing out loud.

The writing style flows smoothly and the book is a quick easy way. The author is very talented in her descriptive writing. The farm came to life in my mind’s eye and I enjoyed that a lot.

There were a couple of mysteries to solve in this book, which is a plus in my book. There were enough clues to sift through and suspects to consider and they were intriguing enough to keep me engaged.

I would highly recommend this book to anyone who enjoys a well crafted cozy mystery. I really enjoyed this book and I am looking forward to the next one in the series.