Here is a list of some of the new releases for the week of February 9th, 2020. I am going to divide the list into 4 days because there are so very many of them for the week. Today is the second day of my list for this week. Hope you find some selections for your weekly reading. Enjoy and happy reading.

A new addition to the Further Adventures of Sherlock Holmes series from science fiction and crime author Eric Brown.

A second wave of Martians has come to Earth – the first wave having succumbed to lethal Terran pathogens. The second wave, arriving some five years later, did so with the aid of a cure for the various ills that scuppered their earlier plans – and these Martians claim to have come in peace.

Humankind, lulled into a false sense of security, welcomes the Martians who bring with them a host of technological and scientific wonders, and for several years an entente exists between the two races. It is only when Holmes and Watson travel to the Red Planet, ostensibly to track down the killer of an eminent Martian philosopher, that they learn the truth: the Martians who invaded Earth are tyrannical despots who subjugated a ‘lesser’ race of their own kind, and are merely biding their time to enslave the citizens of Earth. With the assistance of anti-Martian activist Miss Freya Hadfield-Bell, and a cadre of renegade Martians, Holmes and Watson escape Mars with their lives and return to Earth where they hope to work to overcome the rule of the oppressive Martian overlords.  (Amazon) 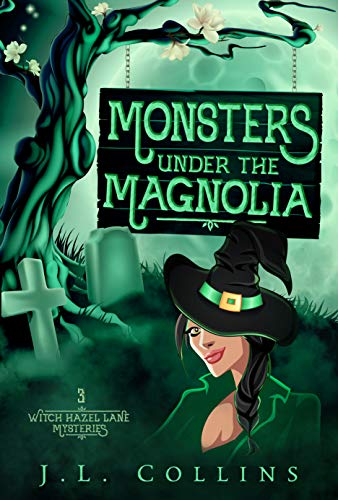 Former Vegas star and witch in hiding, Birdie Devaine is ready for a vacation away from all of the stresses of an ongoing (and haunted) house renovation. Lucky for her she’s got a first-class ticket aboard one of the swankiest cruise ships in the world. Along with her best friends, Birdie’s ready to set sail through the warm Caribbean waters, soak up some much needed sun and sip on some much needed fruity drinks…

But a trip to paradise comes with a price. And on a ship full of magical beings, the price is steep.

Murders. Kidnappings. Something fishy is going on aboard the Magnolia On Water, and Birdie isn’t willing to let her wishes for a relaxing vacation get in the way of finding the killer. Or killers.

This book contains plenty of southern sass, friendship, some delicious comfort food, and a little bit of magic along the way!
Collect your free recipe inside! 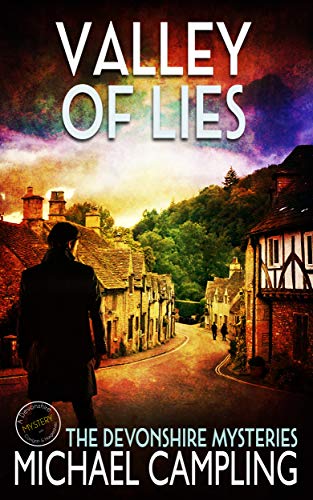 An evening in the pub shouldn’t end like this.

But a murder has been committed, and for Dan, the crime is too close for comfort.

When the police are fooled by a false trail, the wrong man stands accused. But Dan won’t stand by while a friend is blamed. He’s determined to solve the mystery, even if it means putting his own safety on the line.
The real murderer must not go unpunished. Justice must be done. But first, Dan will have to untangle a web of deceit – before it’s too late.

Join amateur sleuth Dan Corrigan as he tackles his greatest challenge to date.

But make sure you have your wits about you because, in this rural valley, the river runs deep, but the lies run deeper still.

Praise for the first Devonshire Mystery, A Study in Stone (All from Amazon reviewers):

A tightly written, fascinating mystery. The protagonists are mysterious in their own ways. Their interactions are interesting and realistic. It held my interest and I look forward to more in this series.

How refreshing to find! What’s not to love? The pace is faster; the male sleuths are quick-witted, modern, and multidimensional. The setting is English. More please.

It’s the characters that really made it work. Dan and Alan are an unlikely pair, having very different personalities, but a shared inability to leave a puzzle unsolved sparks a friendship. I liked their refusal to give up until the mystery was solved.

This was just fun to read from start to finish! I had no idea where it was going, didn’t guess the end either.

A quick and light story just right for my mood. I hope for more!

The interaction between Dan and Alan reminded me of the Odd Couple. Their relationship may seem to grate on each other, but they learn that they do indeed make a good detective team! For this alone, I loved the book!

This was a very different story, and well worth reading.  (Amazon) 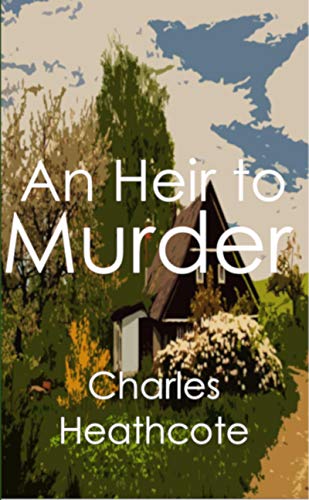 Alice Valentine has lost her job, her aunty is dead, and she’s just discovered she owns a cottage in Partridge Mews. The last thing she needs is murder on her doorstep.When a retired detective is killed, Alice finds herself embroiled in the investigation. She is aided by Marmaduke Featherstone, a friend of the victim and all-round ragamuffin, with enough skeletons in his closet to make a graveyard jealous.As the bodies begin to pile up, Alice and Marmaduke investigate. They discover a link to an unsolved murder that has haunted the town for decades. If they find the murderer, they will discover who killed the heir to the Greenfields Estate fifty years ago.  (Amazon) 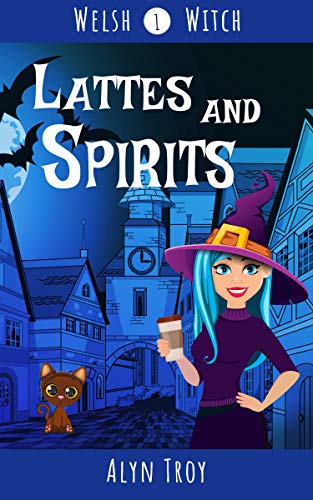 Whipping up cappuccinos is her specialty. But will she stir up trouble when spirits order assistance in solving their deaths?

Barista April Storm longs for more than making a mean macchiato and talking to her ex-boyfriend’s ghost. So when her quirky aunt asks her to help open a hip café in rural Wales, she jumps at the chance to start fresh. But she gets an extra shot of strife when a famous deceased cricketer wants her to spill the coffee beans on his killer.

With her ghostly client unable to remember who did him in, April is forced into the role of supernatural detective. Assisted by her spectral ex, a magical secret agent, and an overcaffeinated talking cat, she finds herself in hot water when the clue trail reveals an escaped demon. And if she can’t get control of her own recently awakened power, the next murder she has to solve may be her own.

Can April serve up justice before a brewing disaster boils over?

Lattes and Spirits is the first book in the delightful Welsh Witch cozy mystery series. If you like sassy heroines, colorful characters, and a side of spells with your cuppa joe, then you’ll love Alyn Troy’s otherworldly adventure.

Buy Lattes and Spirits to froth up some whodunnit fun today!  (Amazon) 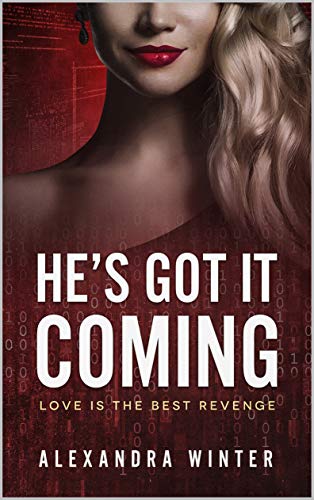 When Daniella can’t kill to avenge her husband’s death, love is the best revenge.
Police told Daniella that her husband’s car crash two years ago was straightforward—an accident with no witnesses.
They were wrong.
A man named Henrik Larsen saw the crash, but instead of calling an ambulance, left him to die.
Using her hacking skills, Daniella plots her revenge. She gains insight into Henrik’s entire personal life so killing him will be easy. But when that plan falls apart, she’s ready to sacrifice her body and sanity to make the man she hates fall in love with her. She’ll give him exactly what he gave her—an unhealable broken heart.
But everything is not as it seems, and what Daniella learns changes her life.(Amazon) 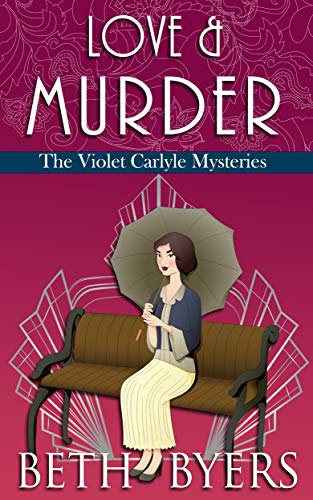 On Valentine’s Day, gifts arrived for Violet. Gifts that weren’t from Jack. And they kept coming.

Book NINETEEN in the Violet Carlyle Mysteries. Are you ready for the roaring twenties? You’ll love Vi, her patient husband Jack, her indulgent twin Vic, and their friends. For fans of Carola Dunn, Jacqueline Winspear, Georgette Heyer, and Lee Strauss. A light, cozy mystery with a fun peek into life in the life of a bright young thing. No swearing, graphic scenes, or cliffhangers.

*There are two short stories that fall between A Merry Little Murder and Murder Among the Roses. They are: New Year’s Madness and Valentine’s Madness. There is also a short story that falls between Murder by Chocolate and A Friendly Little Murder found in Candlelit Madness.  (Amazon) 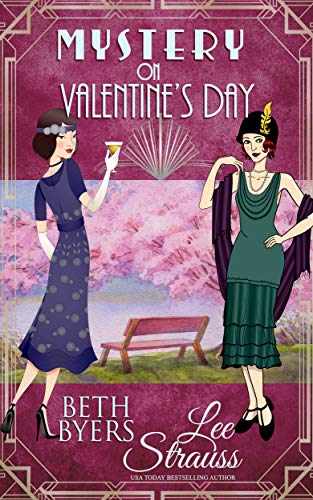 While both Ginger and Violet had plans for a romantic evening of dinner and dancing to celebrate Valentine’s Day with their husbands, something goes terribly awry. One by one, female patrons discover that they are missing jewelry.

In this closed room mystery filled with a brigade of colorful characters, Violet and Ginger join forces to put their skills of deduction to work. Can they unveil the culprit and solve the mystery in time for dessert?

Don’t miss this delectable bite-sized tale. Pairs perfectly with a box of chocolate and a comfy chair!  (Amazon) 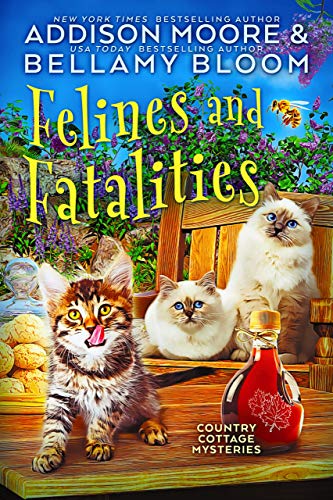 MURDER IN THE MIX Series crossover! Lottie, Everett, Noah, Carlotta, Pancake, Waffles and a surprise guest descend on Cider Cove! A MUST READ!

A bake off for senior citizens is being held at the inn and baker Lottie Lemon has arrived as one of the judges. But when someone turns up dead, accompanied by a mysterious riddle, both Lottie and I are determined to find the killer. But as the riddles grow more sinister, and other threats begin to manifest, it’s clear someone has a bone to pick with both Lottie and me. Our very lives are in danger, proving that this case might just be too big for the both of us.

Bizzy Baker runs the Country Cottage Inn, has the ability to pry into the darkest recesses of both the human and animal mind, and has just stumbled upon a body. With the help of her kitten, Fish, a mutt named Sherlock Bones and an ornery yet dangerously good looking homicide detective, Bizzy is determined to find the killer. 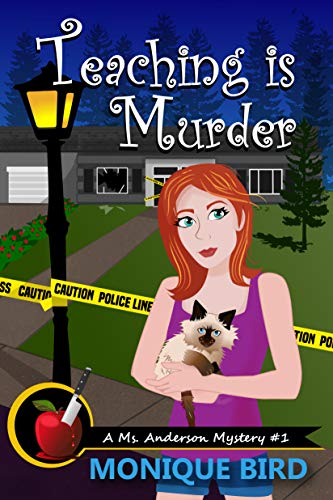 Claire loves the life she has in Fairview, Colorado. She just purchased a home and is in her fifth year teaching seventh-grade science. But Fairview isn’t as tranquil as it seems. On her nightly jog, Claire follows a stray kitten into an empty home and stumbles across a murdered jewelry thief. To make matters worse, the next day, she gets a cryptic email from a former student.

The more Claire tries to contact her old student, the more dangerous her life becomes. Now someone is after her and the missing jewels. As the killer’s attacks escalate, Claire decides to take matters into her own hands. With an old friend who’s now a detective and his handsome older brother, they pursue the murderer. Claire has a plan. It isn’t perfect, but anything is better than becoming the next victim.  (Amazon)