Here is a list of some of the new releases for the week of February 16th, 2020. I am going to divide the list into 4 days because there are so very many of them for the week. Today is the second day of my list for this week. Hope you find some selections for your weekly reading. Enjoy and happy reading. 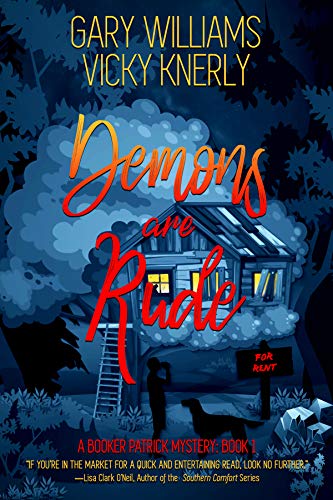 “When everything goes wrong for a man and he befriends a talking dog, things can’t get worse, right? Wrong. This hilarious read will prove that man’s best friend isn’t always easy to deal with. And when you throw a demon in the mix, things can get very trying. So if you need a break from the real world, pick up ‘Demons are Rude,’ settle in, and enjoy the laughs from Williams and Knerly.”
—Xander Weaver, Author of The Cyrus Cooper Series

Booker “Book” Patrick is having a rough time. His wife left, his career fell apart, and he’s been forced to move to St. Augustine, Florida, and take a low-paying job. The only place he can afford to live is a treehouse in a crusty old man’s back yard.

When Book befriends Drawbridge, a snarky, talking dog that only he can see, the twosome team up to investigate a sudden influx of quirky ghosts, called Diluteds. Diluteds are souls who never reached the afterlife, have no idea how they died, and are now confined to specific buildings: the trifecta of otherworldly odd.

When the happy-go-lucky Diluteds begin to change into fierce, defiant, even gross, supernatural entities, it’s a harbinger of things to come. All this weirdness seems to be leading to a bigger, more terrifying destiny for Book and Drawbridge: a date with a demon—and not the good kind where you have a chance to get lucky. It’s the kind of date that could lead to world annihilation.

“The writing team of Williams and Knerly exchange thrills for chills in their latest offering. Populated by a cast of characters who truly live up to the name, as well as plenty of tongue-in-cheek (or sometimes tongue-in-ear) humor, ‘Demons are Rude’ is a fun, easy foray into the paranormal. If you’re in the market for a quick and entertaining read, look no further.”
—Lisa Clark O’Neil, Author of the Southern Comfort Series  (Amazon) 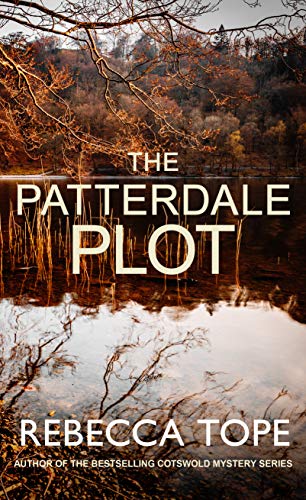 Simmy Brown had hoped that her autumn would be less frantic than usual to give her a chance to enjoy her pregnancy, her upcoming nuptials, and some time looking for a new house in the Patterdale area of the Lake District. But it is not to be … When one of the lodgers at her parents’ Bed & Breakfast dies in her arms after seemingly being poisoned, she becomes embroiled in a complex investigation, headed up by her friend D I Moxon. It is clear the victim had some connection to a controversial new building project near Patterdale and Simmy’s ideas of a quiet run up to Christmas are cruelly dashed.  (Amazon) 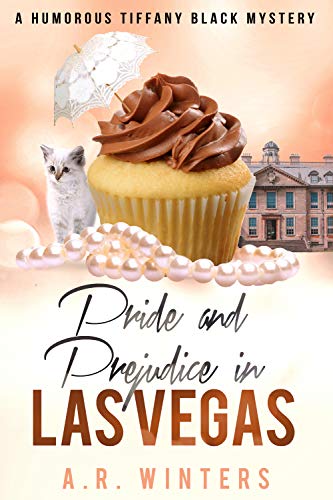 Cupcake-loving croupier Tiffany Black is transported to another era, at the urging of her friend Emily and Nanna, when she tags along to a Jane Austen convention at the Tremonte Casino.

It’s an immersion overload with required period attire and activities like cream tea, lawn bowls, and Regency dancing. But it’s not all in good fun when the conference organizers hire Tiffany to investigate the murder of Robert Darcy, a member of their Board of Directors.

What killed the real-life Mr. Darcy: pride or prejudice?

While Tiffany investigates, her thoughts are never far from Ryan and Stone. She can’t accept what Jack told her, and her belief is only strengthened when she sees a black-clad man who looks like Stone in a fateful alley…

“You fall in love with Tiffany Black from the start, and the mystery starts immediately” – Melissa Greenberg, Amazon.com Top 1000 Reviewer

Pride and Prejudice in Las Vegas is the nineteenth book in The Tiffany Black in Las Vegas Mystery Series. Though it can be read as a standalone, it’s best read in series order.

This is a lighthearted cozy mystery featuring a strong female protagonist, some unusual friends and family, and a mystery that needs solving! It has no graphic gore, bad language or sex.  (Amazon) 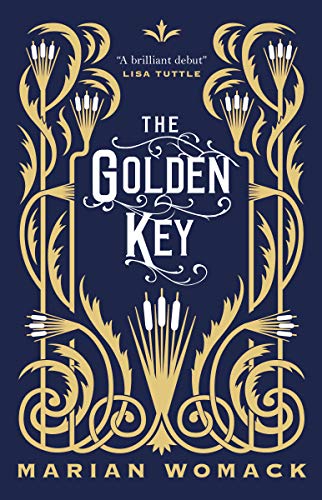 “Enter a mysterious world in the hands of capable women. Getting drawn into this story is easy; getting out again is trickier.”
-BookPage

1901. After the death of Queen Victoria, England heaves with the uncanny. Séances are held and the dead are called upon from darker realms.

Helena Walton-Cisneros, known for her ability to find the lost and the displaced, is hired by the elusive Lady Matthews to solve a twenty-year-old mystery: the disappearance of her three stepdaughters who vanished without a trace on the Norfolk Fens.

But the Fens are an age-old land, where folk tales and dark magic still linger. The locals speak of devilmen and catatonic children are found on the Broads. Here, Helena finds what she was sent for, as the Fenland always gives up its secrets, in the end…  (Amazon) 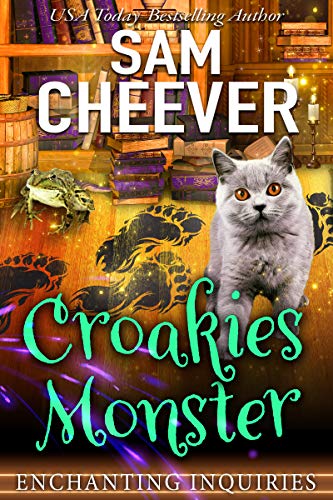 Ancient Chinese proverb says, give cat mouse and give frog fly, they’ll soothe your monsters so you won’t die.

Okay, maybe I just made that up. But I’ll try anything at this point.

Croakies is suddenly being overrun by monsters. Yeah. Monsters. And I have no clue where they’re coming from. Are they tied to something we’ve done in the past? Do they have anything to do with the strange phone calls I’ve been getting from a really prickly local author? Most importantly, how are we going to explain to the humans about the appearance of a certain giantnormous blue monster flinging car-sized cookies around? Where did all these squirrel squattin’ songbirds come from?
And, for the love of the goddess’s favorite spanks, why is there ice all over the floor?

The frog and the cat? Yeah, they’re really pretty useless on this one. But at least they’re living the good life thanks to my tireless efforts to feed, house, and clean up after them and their naughty friend Hobs.

Mega monster boogers! This magic wrangling gig is for the birds. And the frogs. And the cats. And the hobgoblins. And, apparently, for the monsters hiding at Croakies.  (Amazon) 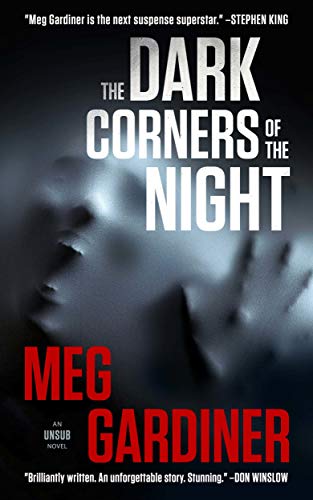 Soon to be an Amazon TV series

I am the legion of the night …

He appears in the darkness like a ghost, made of shadows and fear—the Midnight Man. He comes for the parents but leaves the children alive, tiny witnesses to unspeakable horror. The bedroom communities of Los Angeles are gripped with dread, and the attacks are escalating.

Still reeling from her best friend’s close call in a bombing six months ago, FBI behavioral analyst Caitlin Hendrix has come to Los Angeles to assist in the Midnight Man investigation and do what she does best—hunt a serial killer. Her work is what keeps her going, but something about this UNSUB—unknown subject—doesn’t sit right. She soon realizes that this case will test not only her skills but also her dedication, for within the heart of a killer lives a secret that mirrors Caitlin’s own past. Hesitancy is not an option, but will she be able to do what must be done if the time comes?

Tense and impactful, Edgar Award winner Meg Gardiner’s latest UNSUB thriller will leave you on the edge of your seat until its riveting conclusion.  (Amazon) 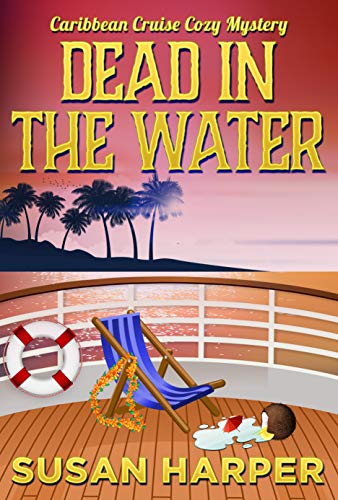 Nothing stops a party faster than a dead body!

Hope and the crew of the Caribbean Honey have put ashore for little bit of well-deserved R&R. And nothing says rest and relaxation like a beach party. At least until things turn deadly. Can Hope find a killer or will her mystery-solving career be dead in the water?

Download Dead in the Water and start solving your next mystery today!