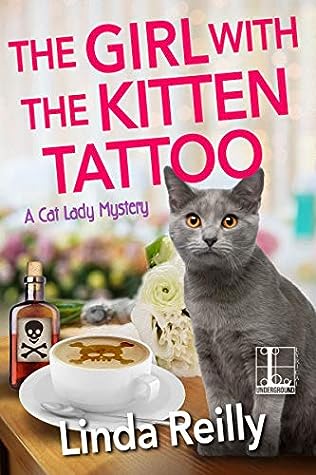 Wedding bells will soon be ringing in Whisker Jog, New Hampshire. But instead of church bells, they may be tinkling above the door of Bowker’s Coffee Stop. Lara Caphart’s best friend Sherry and her fiancé David want to tie the knot where they met—in her family’s coffee shop. Lara is overjoyed for her friend, but as she feeds and grooms the kitties at the High Cliff Shelter for Cats in her aunt Fran’s Folk Victorian, she can’t help but wonder when her own beau, lawyer Gideon Halley, will stop hinting and make their union legal.

It doesn’t help that Gideon’s old flame, Megan Haskell, just showed up with a tearful yarn about being fired that smells fishier than a can of tuna. But Blue, the Ragdoll cat who only Lara can see, appears to be on Megan’s side. Should she ignore her green-eyed monster of jealousy in favor of her blue-eyed spirit cat? When Megan’s ex-boss is found dead, Lara has to retract her claws long enough to follow Blue’s uncanny clues and clear her rival of a murder charge . . .

“Engaging characters, the psychic cat Blue, and the extraordinary healing power of cats are a winning combination for this enjoyable, heart-warming novel.”
—Kings River Life Magazine on Claws of Death

“Smart, sassy, and a little bit scary. Everything a good cozy should be!”
—Laura Childs, New York Times bestselling author of the Tea Shop Mysteries, on Fillet of Murder (Goodreads)

The characters are well rounded, well developed and three dimensional. Lara and aunt Fran are such great characters, they love each other and would do anything for the other. Gideon was a bit of a pain in the rear in this book, he was not the great boyfriend that I thought he was. The secondary characters added a lot to the story. As usual, the cats stole the show and I just love the High Cliff Shelter for Cats.

The writing style flows smoothly and it defines the characters clearly through their actions and words. The author is very talented in her descriptive writing and these descriptions pulled me into the story from the very beginning.

The mystery was well plotted and not easily solved. There were enough clues to sift through and suspects to consider and I was very surprised by who the culprit was. I like when I am surprised.

I would highly recommend this book to anyone who enjoys a well crafted cozy mystery. This book and series is really top notch and I am looking forward to the next book already (I was sad when I was done reading it).