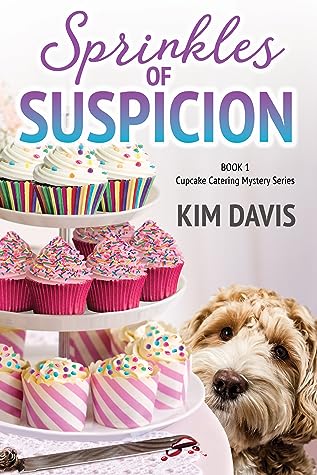 One glass of cheap California chardonnay cost Emory Gosser Martinez her husband, her job, and her best friend. Unfortunately, that was only the beginning of her troubles.

Distraught after discovering the betrayal by her husband and best friend, Tori, cupcake caterer Emory Martinez allows her temper to flare. Several people witness her very public altercation with her ex-friend. To make matters worse, Tori exacts her revenge by posting a fake photo of Emory in a compromising situation, which goes viral on social media. When Tori is found murdered, all signs point to Emory being the prime suspect.

With the police investigation focused on gathering evidence to convict her, Emory must prove her innocence while whipping up batches of cupcakes and buttercream. Delving into the past of her murdered ex-friend, she finds other people had reasons to want Tori dead, including Emory’s own husband. Can she find the killer, or will the clues sprinkled around the investigation point the police back to her? (Amazon)

The characters are well rounded and well developed. Emory is having a really hard time. She just found out that her husband and her best friend are having an affair. If that is not bad enough, when her best friend is murdered, she is the prime suspect. She has the means, the motive and the opportunity and she knows she looks guilty. The only problem is, she knows she did not do it, and she has to find out the real culprit while she still can.

The writing style flows smoothly and it defines the characters very clearly through their actions and words. I thought that the author is very talented in her descriptive writing and these descriptions pulled me into the story right from the beginning.

The mystery was well plotted and carried on well throughout the book. There were enough suspects to consider and clues to sift through. I must say that I was very surprised by the actual killer, I did not see that one coming.

I would recommend this book to anyone who enjoys a well crafted cozy mystery. I am looking forward to reading the next book, I have a feeling that Emory is going to have her hands full with Tillie, the woman that she has been hired to cook for and help. That should bring a lot of fun adventures.

I voluntarily reviewed an ARC of this book provided by the publisher, Cinnamon and Spice Press, and NetGalley, which I greatly appreciate.