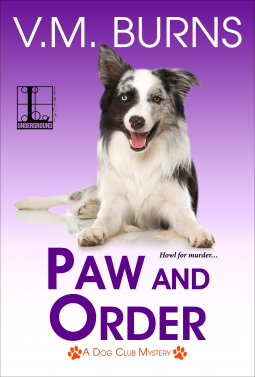 Dog-loving divorcée and amateur sleuth Lilly Echosby is not the only one who wants her new foster poodle. Some are willing to kill to have him . . .

Lilly’s best pal Scarlett “Dixie” Jefferson has done it again! She’s convinced eccentric poodle-loving billionaire Archibald Lowry to sponsor a grand fundraiser for the Eastern Tennessee Poodle Rescue. Tragically, it’s too late to rescue Lowry, who is murdered at the event. His pet poodle is now orphaned, so Dixie begs Lilly to foster the adorable pup. Of course, she already has a poodle—her beloved Aggie, named after Agatha Christie. Fortunately, Aggie seems to like the new addition to the family, whom Lilly renames Rex, after her second favorite mystery author, Rex Stout.

But she’s barely welcomed Rex into her home when there’s an attempted poodle-nabbing, foiled with Aggie’s help. As desperate characters try to get their hands on the canine cutie, Lilly turns to Dixie’s dog training class to help her sort through a litter of suspects. Ultimately, she may have to unleash Rex as bait to collar the killer . . . (Amazon)

The characters are well developed, well rounded and three dimensional. I so enjoy the relationship between Lilly and Dixie, her best friend. They are always ready for a good time, but they can be serious if need be. They are known to track down killers when it is necessary, and unfortunately it is needed now. I enjoyed getting to spend time with Lilly’s daughter and Red, Lilly’s boyfriend.

The mystery is well plotted and there were enough clues to sift through and suspects to consider. I did not know for sure who the killer was until the reveal at the end.

The writing style flows smoothly and the book is an easy read. The author is very talented in her descriptive writing and it helped bring the book to life in my mind.

I would highly recommend this book (and series) to anyone who enjoys a well crafted cozy mystery. I cannot wait to see what happens next with Lilly and her friends.

2 thoughts on “Review of Paw and Order”