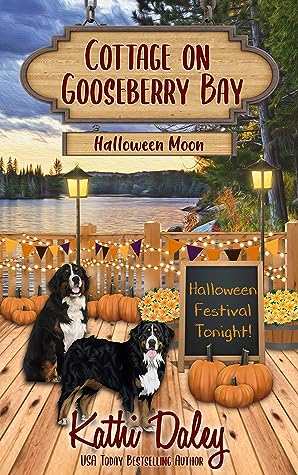 Ainsley Holloway had come to Gooseberry Bay to find answers about her past. She’d come to find an explanation for the dreams that haunted her after the death of the cop who’d both rescued and raised her. And she’d come to identify the family she couldn’t remember but knew in her heart she’d once belonged to.

Ainsley hoped that by finding these answers, she’d also find healing. She hoped that once she’d resurrected the memories buried deep in her mind, she’d find peace.

In book 1 in the series, Ainsley arrives in Gooseberry Bay only to find there will be no easy answers as she’d so naively hoped. Unwilling to leave before she gets what she came for, she rents a cottage on the sea where she and her dogs, Kai and Kallie, can settle in and wait.

Her first night in town she meets a young woman who is later found dead. The local sheriff has labeled the death of this young woman a suicide based on a text message she’d sent before she died. But Ainsley, who’d spoken to the victim only hours before the text was sent, isn’t quite as sure of the easy answer the sheriff would like everyone to believe.
An investigative journalist by trade and cops daughter by upbringing, Ainsley never had been the sort to walk away from unanswered questions, so with the help of new friends she meets along the way, she initiates a parallel investigation which seems to indicate the sheriff’s real motivation in trying to sell the suicide angle to the community is to protect the interests of a very rich and very powerful man. (Amazon)

This is a new series written by this author and it was a good one. It has all of the things that I look for in a cozy book-great characters, an inviting setting and a good mystery.

The characters are well developed and well rounded. Although Ainsley is new to Gooseberry Bay, she is making friends and beginning to feel like part of the community. She soon makes friends with Parker, Josie and Jemma. The four of them are very willing to do what it takes to find the killer of a girl they know.

The author is very talented in her descriptive writing and it pulled me into the story right from the beginning. Through much of the book I felt like I was right there, watching all of the action in Gooseberry Bay taking place.

As is usual with this author, there are a couple of mysteries taking place in this book. One is who killed the young woman, and the other is what really happened when Ainsley was adopted. That one will take some more work from Ainsley to get to the truth.

I would recommend this book to anyone who enjoys a well crafted cozy mystery. I cannot wait to read the next book in this series.

2 thoughts on “Review of Cottage on Gooseberry Bay: Halloween Moon”