Here is a list of some of the new releases for the week of September 20th, 2020. I am going to divide the list into 4 days because there are so very many of them for the week. Today is the second day of my list for this week. Hope you find some selections for your weekly reading. Enjoy and happy reading. 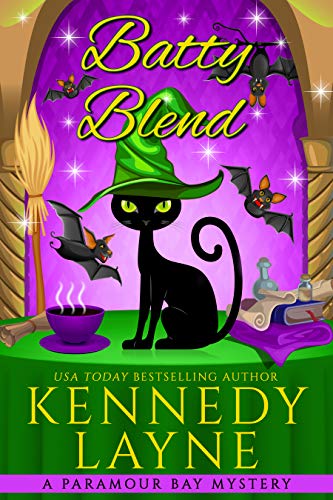 Summertime is drawing to an end and taking with it the humidity, hay fever, and annoying mosquitos that couldn’t seem to quench their thirst this past season. Unfortunately, the insects aren’t the only thing biting in the quaint, coastal town of Paramour Bay, Connecticut!

Raven Marigold is getting ready to host a blow-out end of summer sale to clear out her inventory at the teashop when word starts circulating that some of the furry critters escaped the local pet shop…including a rescued, hairy-legged vampire bat who is looking for his forever home. Raven and her familiar set out to discover if the missing bat is in anyway related to the mysterious visiting vampire they have yet to identify, but they soon learn that there is more to the mystery than meets the eye!

Grab your wooden stakes and garlic necklaces for this quirky tale of unmasking a vampiric threat that might be closer than you think!  (Amazon) 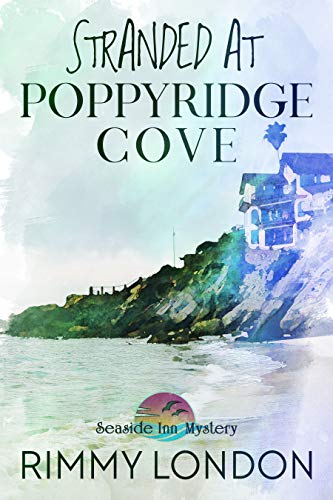 What happens when your stress-free vacay ends up being more than you bargained for?

When paranoid surgeon Jessie LeVan wants to rent the entire Inn at triple the cost, Abby and Chase are thrilled to have the extra income. But, he demands absolute solitude, and one renter never got the message.

Taylor, a corporate lawyer struggling with anxiety and nightmares, is in desperate need of a break. Her week at Poppyridge Cove was a lifeline she couldn’t do without. So when a bossy doctor insists she leaves, she refuses. There’s plenty of space, after all, and she vows to stay out of his way.

But something’s not right in the high profile doctor’s life. With each confusing turn in his behavior, Taylor quickly realizes it might’ve been smarter to leave. When her vacation away from it all begins to feel more like a trap, she’s determined to set things right. And if it means using every lawyer-savvy trick in the book… so be it.

Start reading today!! Join Jessie and Taylor as they battle it out in this high-stakes mystery that leaves them racing to find answers before someone gets hurt…  (Amazon) 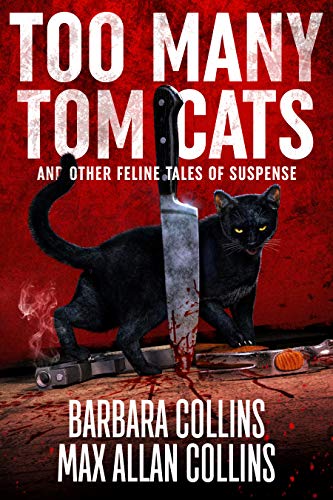 In “A Proper Burial,” a childless couple is driven to extremes to get back the remains of their beloved dead cat, held as evidence in a murder case. In a saloon brawl instigated by hatchet-wielding Carry Nation, the bartender kills “Carry’s Cat,” and Carry is later charged with the saloonkeeper’s murder. When an actress leaves her fortune to her cat, a scheming daughter tries to rub out “The Ten Lives of Talbert.”

Can an elderly woman beat a murder rap by claiming that her cat is her reincarnated husband? Find out in “Aunt Emma’s Defense.” And in “Cat Got Your Tongue,” co-written with mystery-writer husband Max Allan Collins, a conniving young couple attempts to steal the cat of a taxidermy-loving old vaudevillian. 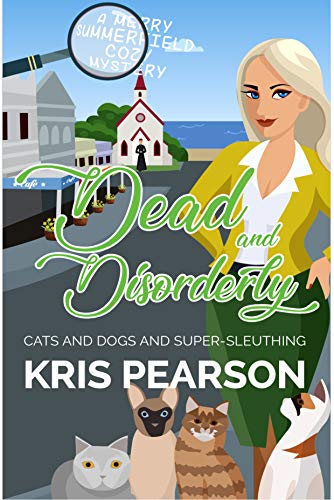 Hi – I’m Merry Summerfield, law-abiding book editor, pet-minder, and unintentional sleuth. When I find Matthew Boatman’s door swinging open I slink into his dark and cat-infested house to make sure he isn’t sick. To my horror he’s so sick, he’s dead.

The shiny silver arrow in his back is beautifully tidy compared to half a lifetime’s high-piled hoarding. OMG – the mess! Honestly, who could live like this? Someone needs to call the cops – and that’s me. Again. Detective Bruce Carver is far from impressed, and doesn’t approve of my plan to feed all the cats so I can hang around while the house is being emptied out.

I’m watching my back – no arrows please – and keeping my eyes open and my ears flapping as I dish out the kibble, but old Matthew was a diamond hunter in days gone by. Does he have a million-dollar stash of gems hidden here? Is this why he was shot? And has reporting the crime put me in danger?

This fun cozy mystery is full of your favorite people from the first two in the series. Plus a puzzling murder, a touch of romance, and laugh-out-loud lines. Be happy – Merry is back!  (Amazon) 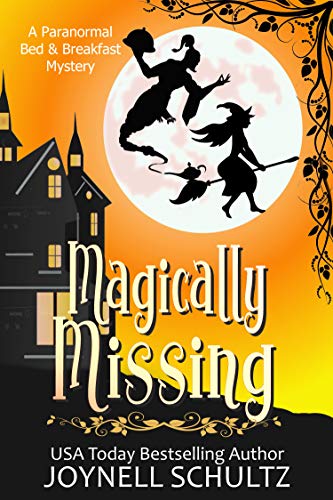 Kyla has three simple desires:
1.To make the perfect deviled egg.
2.To survive her new boss (who happens to be her boyfriend’s aunt.)
3.To be granted three wishes by a genie.

As it stands right now, her third desire might be the only one in reach…that is until Luke’s genie lamp disappears.

And Luke is a free agent. If whoever has the lamp gives it a simple rub, all Luke’s freedom will disappear in one big poof.

And with his freedom goes Kyla’s first real relationship in years…and any plans either of them had for the future…and the first home Kyla’s had since her parents passed away.

But Kyla is a capable witch. She’s solved murders. Certainly she can follow a few clues and discover who took her boyfriend’s genie lamp.

How hard can that be?


You’ll love the third installment of the Paranormal Bed & Breakfast series because the pages are filled with everything you’ve been waiting for.  (Amazon) 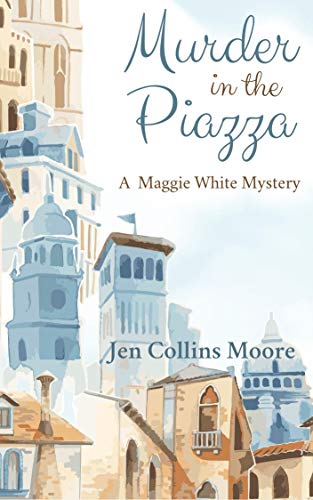 Maggie White, a downsized American executive stuck in Rome on her husband’s expat assignment, is finding the dolce vita isn’t all it’s cracked up to be. She’s taken a job offering painting instruction to well-heeled travelers and her boss—a rather unpleasant English lord—has turned up dead in his penthouse. Maggie’s left with a palazzo full of suspicious guests, a valuable painting her boss might have stolen, and a policeman who’s decided she’s the prime suspect. Now Maggie must keep the tour up and running while she tracks the killer and works to clear her name.  (Amazon) 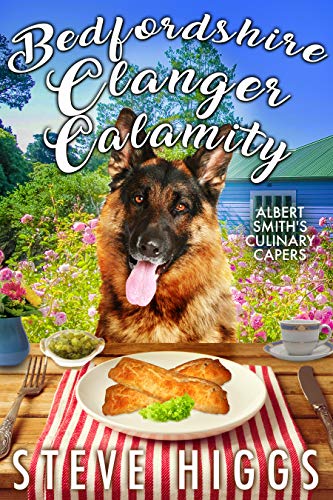 Baking. It can get a guy killed.

In the small Bedfordshire town of Biggleswade, retired detective Albert, and former police dog, Rex, are enjoying a peaceful break from the murder and mayhem of the last week. Until the waitress serving him is arrested for murder …

… and he discovers she killed the café’s owner three days ago.

But Albert saw her eyes when the police came for her – she is innocent! With evidence stacked against her, no alibi, and both motive and opportunity, she will carry the blame unless someone can prove otherwise.

Left holding her dog when the police took her away, Albert does what he does best … he snoops. There is something very odd going on, that’s for sure, but as he starts to investigate, the woman’s checkered past comes to life. Is she guilty after all?

In no time at all Albert becomes the target and this time it will take more than Rex to keep him safe.

Is there a master criminal working behind the scenes? What possible motive could he have? One thing is for sure … this is no underdog tale!

‘This book is laugh out loud funny! Rex Harrison the dog steals the show continually.’
‘The adventures he and Rex get into are hilarious. You will not want to put it down and will be begging for the next book. Steve Higgs is a masterful storyteller!’  (Amazon) 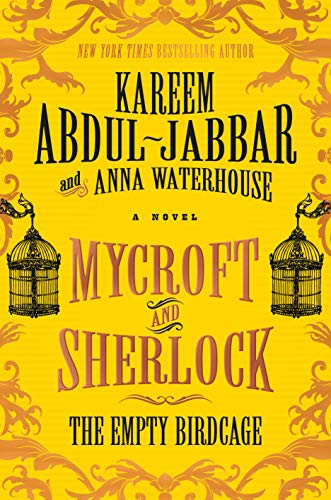 It is 1873, and as the economies of Europe threaten to crumble, Mycroft Holmes finds himself in service to the Crown once again. A distant relative of Queen Victoria has been slain by the Fire Four Eleven killer, a serial murderer who leaves no mark upon his victims, only a mysterious calling card. Meanwhile, Sherlock has already taken it upon himself to solve the case, as his interest in the criminal mind grows into an obsession.

Mycroft begrudgingly allows Sherlock to investigate, as Ai Lin–the woman he is still in love with–needs his aid. Her fiancé has been kidnapped, and the only man who might know his fate is a ruthless arms dealer with a reputation for killing those who cross him. Mycroft persuades his friend Cyrus Douglas to help find the young man, but Douglas himself is put in harm’s way.

As Sherlock travels the country on the hunt for the Fire Four Eleven murderer, both he and Mycroft will discover that the greed of others is at the root of the evil they are trying to unearth… (Amazon) 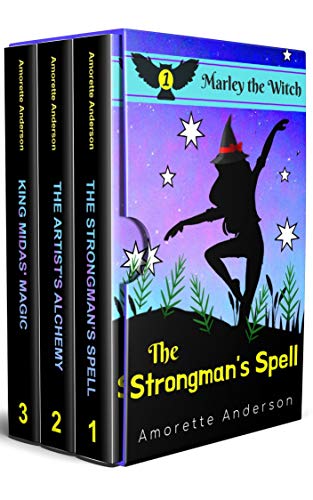 Marley Greene is an amateur witch who just wants everyone to get along.

With her new retreat center up and running,

she hopes to spread magic and healing to all who enter.

What she doesn’t bargain for is how much trouble can go along with deep healing!

Between mixing up mudbaths and arranging crystal grids,

Marley finds herself trying to solve a mystery or two.

After all, dead bodies are hardly good for business.

Can Marley and her witch sisters keep everything under control?

Trick or treat takes a deadly turn in Regency England’s Cornwall when a courageous chocolate Labrador and his sarcastic tabby cat friend must battle smugglers, a murderous spy, and even a broken-hearted ghost to save their mistress from a traitor’s death on the gallows. Dead Men tell no tales, but these animals could speak volumes–if they can stay alive long enough to get someone to listen!


Then spy catcher Major Felix Abbey arrives to find Magdalen up to her neck in mystery and murder and the animal detectives must work to save Magdalen from prison. But they make a shocking discovery that could doom them all— 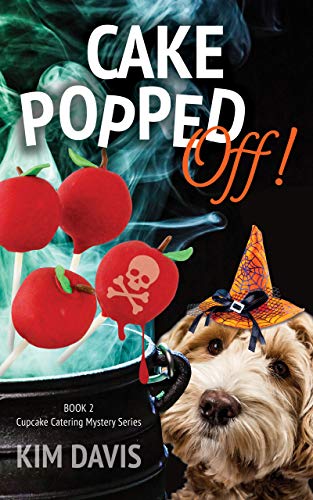 Cupcake caterer Emory Martinez is hosting a Halloween bash alongside her octogenarian employer, Tillie. With guests dressed in elaborate costumes, the band is rocking, the cocktails are flowing, and tempers are flaring when the hired Bavarian Barmaid tries to hook a rich, hapless husband. Except one of her targets happens to be Emory’s brother-in-law, which bodes ill for his pregnant wife. When Emory tracks down the distraught barmaid, instead of finding the young woman in tears, she finds her dead. Can she explain to the new detective on the scene why the Bavarian Barmaid was murdered in Emory’s bathtub with Emory’s Poison Apple Cake Pops stuffed into her mouth?

With an angry pregnant sister to contend with, she promises to clear her brother-in-law’s name. As Emory starts asking questions and tracking down the identity of the costumed guests, she finds reasons to suspect her brother-in-law has been hiding a guilty secret. Her search leads her to a web of blackmail and betrayal amongst the posh setting of the local country club crowd. Can Emory sift through the lies she’s being told and find the killer? She’ll need to step up her investigation before another victim is sent to the great pumpkin patch in the sky.