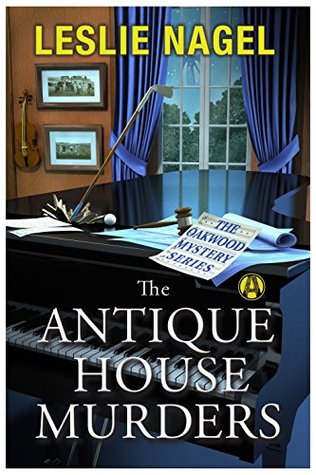 In this irresistible cozy mystery from the author of The Book Club Murders, amateur sleuth Charley Carpenter fights to avenge a crime that hits far too close to home.

Mulbridge House stood, silent and decaying, deep in the woods at the heart of Oakwood, Ohio, long before the passing of Augusta Mulbridge. Yet suddenly everyone in town seems to have a stake in its fate: the greedy heirs, eager to tear it down for a tidy profit; the local preservationists, determined to maintain it as an historic site; the angry neighbors, staunchly opposed to the construction of a modern subdivision. Even Charley Carpenter is forced to admit that her beloved shop, Old Hat Vintage Fashions, could use an infusion of the estate’s treasures.

The clock is ticking. The wrecking ball is ready to swing. All that stands between Mulbridge House and oblivion is one final vote. That, and murder . . .

The trouble begins when Charley walks into auctioneer Calvin Prescott’s office to find her cherished family friend crumpled on the floor. Detective Marcus Trenault quickly connects his death to a string of increasingly violent burglaries plaguing Oakwood. But when Charley uncovers a link to a massive land swindle worth millions, not to mention a drug ring operating out of the manor’s abandoned outbuildings, that theory crumbles faster than Mulbridge House. Now Charley’s racing to catch a killer before everything falls apart.  (Goodreads)

The characters are well developed and well rounded.  Charley is a hard working business woman, clever and feisty.  She is not afraid of hard work or putting her nose where it does not belong.  When a friend of hers is murdered, she is more than ready to put her sleuthing skills to work to figure out the killer.  With the help of her friends, and to the dismay of her detective boyfriend, she is ready to tackle the mystery and find out the truth.  There were times when I just shook my head and wanted to shake her, for the chances she took while investigating.  The secondary characters added a lot to the story.

The writing style flows smoothly and the book is an easy read.  The author is very talented in her descriptive writing and through much of the book I felt like I was right there, watching all of the action taking place.  The author is also very talented in weaving together different story lines and mysteries into a great book.  There were so many suspects to consider and clues to sift through that it was very difficult to solve this mystery.

I would recommend this book to anyone who enjoys a well plotted, well crafted mystery. This book is a lot grittier than the typical cozies that I read.  The language is stronger than what is normal in a cozy mystery.  This did not bother me at all, in fact to me it made the book seem more real.

I received a free copy of this book from NetGalley in exchange for a honest review.  I would like to thank NetGalley and Random House Publishing Group-Alibi for the opportunity to read and review this book. 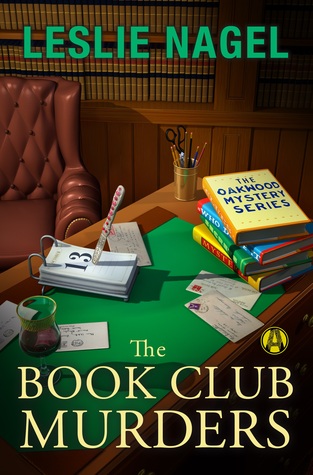 In a charming cozy mystery series debut, Leslie Nagel’s irrepressible small-town heroine finds that her fellow mystery book club members may be taking their Agatha Christie a bit too literally—and murder a bit too lightly.

Charley Carpenter has poured heart and soul into her clothing store, Old Hat Vintage Fashions. She’ll do anything to make it a success—even join the stuffy Agathas Book Club in order to cultivate customers among Oakwood, Ohio’s wealthy elite.

Although mixing with the most influential women in town has its advantages, Charley finds the endless gossip a high price to pay. But after two women with close ties to the Agathas are brutally murdered, everyone falls under threat—and suspicion. When key evidence indicates that both murders are the work of the same hand, Charley realizes that the killer has arranged each corpse in perfect imitation of crime scenes from the Club’s murder mystery reading list. She uses her membership in the Club to convince Detective Marcus Trenault to use her as an inside informant. Not that he could stop her anyway.

Intelligent, fearless, and every bit as stubborn as Marc is, Charley soon learns the Agathas aren’t the only ones with secrets to protect. Passions explode as she and Marc must race against time to prevent another murder. And if Charley’s not careful, she may find herself becoming the killer’s next plot twist. (Goodreads)

Charley Carpenter is the proud owner of Old Hat Vintage Fashions and she is so proud of her shop.  She has worked hard to make it successful and is willing to do just about anything to keep it that way.  Even join a book club, The Agathas, where most of the members are priggish and not people she would normally spend time with.  But she knows these women have money and influence, and she should try to be friends with them. When two murders occur close together, and the victims have a tie to the book club, she realizes that one of the members may be a cold blooded murderer.  Since she is a member of the club, she is very well aware of the fact that she could become the next victim.  She knows she has to do whatever she can to catch the killer before her life is written off for good.

The characters are well developed, well rounded and three dimensional.  Charley is a hard working, smart and clever woman. One of the things I found refreshing about her and this book is that Charley did not take unnecessary chances and instead of  going behind law enforcement’s back, she worked with them side by side.  It helped that she had a past history with lead detective, Marc Trenault, all though it was not a good history.  I enjoyed reading about their antagonistic relationship.  Charley’s best friends, Frankie and Dmitri, added a lot to the story and were people I was glad to get to know.  And her relationship with her dad is heartwarming.

The writing style flows smoothly and the book is a fast paced read.  The author is very talented in her descriptive writing and through much of the book I felt like I was right there, watching the action taking place all around me.  I could see the vintage clothing in my mind and hear conversations as though I was right there in the room.  I really enjoy when this happens.

The mystery is carried on well throughout the entire book.  There were enough viable suspects to make picking out the killer nearly impossible.  They all had motives and secrets that might be worth killing for.  Twists and turns and red herrings abound and I did not figure out the murderer until it was revealed at the end.  That is a real plus in my book.

I would recommend this book to anyone who enjoys a well plotted, well crafted mystery.  This book is a lot grittier than the typical cozies that I read.  The language is stronger than what is normal.  In my opinion, that made the book seem more realistic.  I consider this book more of a romantic suspense mystery than a cozy.  This book had everything I look for in a book: mystery, romance, humor, and suspense.  If I could I would give this book more than five stars, that is how much I loved it.  There is not one thing I would change about it.  This author has penned a fantastic debut and I am sure she will be very successful.  I am eagerly looking forward to reading more books that she creates.

I received a free copy of this book from NetGalley in exchange for a honest review.  I would like to thank NetGalley and Random House Publishing Group-Alibi for the opportunity to read and review this book.