Raiders Of The Lost Bark 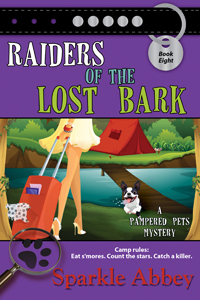 Mel’s enemy may be barking up the wrong tree…

But someone is about to become a killer.

Was it Redmond, the angry sous chef who detested working for Addison? What about rival chef, Pepper Maddox? The glamping chef gig was hers until Addison blackmailed her way into the job. And then there’s Asher, a charming fellow camper whose past relationship with Addison isn’t the only secret he’s guarding. Mel’s not one to tuck tail and run, even when it looks like she may be the next victim. (Goodreads)

Mel agrees to go on a camping trip for charity with her friend and assistant, Betty.  She was kind of forced to go because a celebrity pet chef, who is blackmailing her, wants her to go camping and promises to turn over the blackmailing material at the campgrounds. Unfortunately, before Mel can get the evidence, the blackmailer is murdered.  Mel is considered a suspect because she was seen arguing with the victim shortly before the murder.  With the help of Betty, Mel has to uncover the killer before she ends up up a creek without a paddle.

The characters are well rounded and well developed.  Betty is a quirky funny character and I enjoyed the bickering and banter between her and Mel.  Many of their exchanges had me laughing out loud.  I also found many of Mel’s’ thoughts quite humorous.  And the battle continues between Mel and her cousin, Caro, over their grandmother’s brooch and I really enjoyed that.

The writing style flows smoothly and the book is a quick easy read.  The mystery is carried on throughout much of the book and there were enough suspects to keep the reader guessing.  The writing is descriptive and while reading the book, I felt like I was at the campgrounds, watching all the action going on around me.  To me, that makes for an extra special read, being drawn into the world that is created by the author.

I would recommend this book to anyone who enjoys a well crafted cozy mystery.  It has a bit of everything that makes for a great cozy: great characters, great setting, great mystery and great animals.  Do yourself a favor and pick up all the Pampered Pets Mystery series and enjoy.

I received a free copy of this book from NetGalley in exchange for a honest review.  I would like to thank NetGalley and Bell Bridge Books for the opportunity to read and review this book.

Caro Lamont is an animal therapist who lives in Laguna Beach.  When an officemate, Cash, asks her to watch his tabby cat for him, she readily agrees.  But when she goes to his house to return the cat, she finds his business partner floating in a pool, an electrical cord wrapped around his neck.  That makes it pretty obvious that the death is no accident.  And to make matters worse, Cash is no where to be found.  Caro does not know if Cash is dead or alive, has been kidnapped or if he is the person responsible for his partners death. 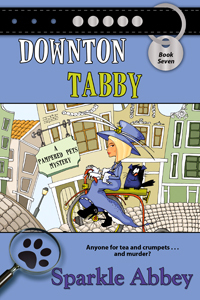 The characters are well developed, well rounded and realistic.  One of the things I like best about this book is that Caro did not do foolish things while helping with the murder investigation.  In so many of the series I read, the protagonist goes off by themselves and do foolish things (they even think to themselves it is foolish but do it anyway).  Caro did not do this but still was able to get clues to help the detective solve the murder.   Betty is a quirky crazy character and she added a lot to the story.  The secondary characters also added a lot to the book.

The writing style flows smoothly and the book is an easy read.  The writing is descriptive and at times I felt like I was right there watching the action instead of reading about it.  The mystery was carried on throughout much of the book and there were many twists and turns that kept me guessing.  There are enough suspects to keep it interesting.

I would recommend this book to anyone who enjoys a well crafted cozy with enjoyable characters.  This is the first book I have read in the series but it definitely will not be the last.  I already have the other books to read.  I am mad at myself that I waited this long to start reading this fantastic series.

I received a free copy of this book from NetGalley in exchange for a honest review.  I would like to thank NetGalley and Bell Bridge Books for the opportunity to read and review this book.