Krissy Hancock moves to Pine Hills with her best friend, Vicki, to open a coffee/bookstore.  They name the store “Death By Coffee”.  They picked this name because that is the name of Krissy”s fathers famous mystery book.  Krissy does not really like the name because she thinks it is a little morbid.  And when the name becomes a reality, Krissy is ready to rename the place.

The first day that the shop is open a man comes in for a cup of coffee.  He is not very pleasant and does not seem very impressed with his beverage.  Not long after he arrives in the store, he receives a phone call and leaves and returns to his place of business across the street.   A short time later emergency vehicles are in front of “Death By Coffee” and Krissy learns that her unfriendly customer is dead.  Although it is initially believed that his death was accidental, after more investigating it is believed it may be murder.  He died from anaphylactic shock and although he was extremely allergic to peanuts, no epipen was found with his body.  And since Krissy was one of the last people to see him alive and her coffee 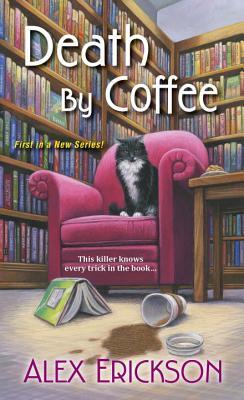 was one of the last things that he drank, she is a person of interest.   She knows that she has to clear her name and the reputation of the shop, so she decides to find the killer herself.  Besides, she really enjoys solving puzzles, and this is a whopper of a puzzle.  But the more she delves into the life of the deceased, the more she learns that he was not an ideal family man and is known for being a womanizer.  This may be the one puzzle that she can not solve, but it may be the most important one of her life because her freedom might depend on it.

The characters are well developed and well rounded.  I thought that Krissy was very funny and I laughed at loud at some of her thoughts and ideas.  I also laughed at the antics of Trouble and Misfit, two crazy cats owned by Krissy and Vicki.   At times Krissy acted a lot younger than she was but that was alright with me because it just added to the humor.

The mystery is carried out throughout much of the book and I thought it was well plotted.  Since the victim was not the nicest man in town, there are many suspects to consider,  Twists and turns made it difficult to determine the killer and I did not know who the culprit was until it was revealed at the end.

I would recommend this book to anyone who enjoys a well crafted cozy mystery.  It is the first book in the series and I will definitely read book two.  One thing that I found interesting is that this book was written by a male.  I do not know if I have ever read any other cozies written by a man.  I just know that he did a good job, in my opinion.

I received a free copy of this book from NetGalley in exchange for a honest review.  I would like to thank NetGalley and Kensington for the opportunity to read and review this book.

One thought on “Review of Death By Coffee”