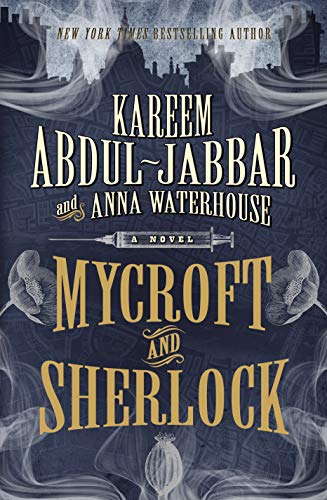 It is 1872, and a series of gruesome murders is the talk of London. Mycroft Holmes–now twenty-six and a force to be reckoned with at the War Office–has no interest in the killings; however his brother Sherlock has developed a distasteful fascination for the macabre to the detriment of his studies, much to Mycroft’s frustration.

When a ship carrying cargo belonging to Mycroft’s best friend Cyrus Douglas runs aground, Mycroft persuades Sherlock to serve as a tutor at the orphanage that Douglas runs as a charity, so that Douglas might travel to see what can be salvaged. Sherlock finds himself at home among the street urchins, and when a boy dies of a suspected drug overdose, he decides to investigate, following a trail of strange subterranean symbols to the squalid opium dens of the London docks. Meanwhile a meeting with a beautiful Chinese woman leads Mycroft to the very same mystery, one that forces him to examine the underbelly of the opium trade that is enriching his beloved Britain’s coffers.

As the stakes rise, the brothers find that they need one another’s assistance and counsel. But a lifetime of keeping secrets from each other may have catastrophic consequences…  (Amazon) 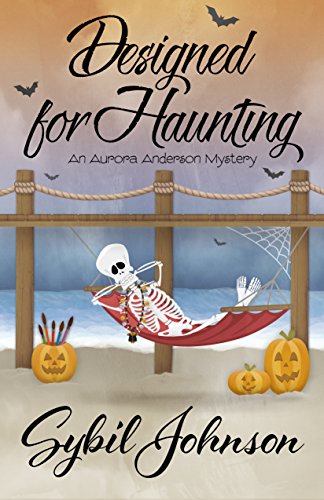 October brings a message from Beyond The Grave…

Halloween is fast approaching in the quiet Los Angeles County city of Vista Beach, home of computer programmer and tole-painting enthusiast Rory Anderson. While her painting chapter prepares to open its annual boutique house, Rory receives an unexpected email from Beyond The Grave, a company that automatically sends out messages when someone dies.

“I think I have a stalker,” the message reads. “If you’re reading this I’m either missing or dead. My life may depend on what you do. Please find out what happened to me.”

Haunted by her friend’s disappearance and possible death, Rory begins her search with the help of best friend and fellow painter, Liz Dexter. Can they discover who has designs on the missing woman and uncover the truth before one of them becomes the stalker’s next victim?

DESIGNED FOR HAUNTING by Sybil Johnson | A Henery Press Mystery. If you love one, you’ll probably love them all.  (Amazon) 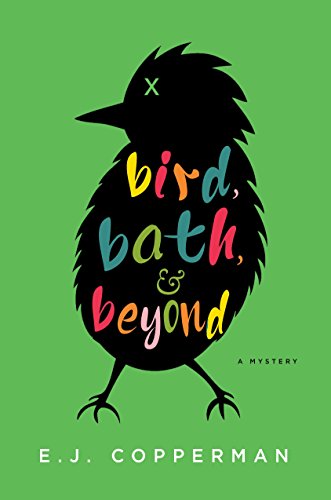 The second in this hilarious cozy mystery series features a woman who is a talent agent for show biz animals and discovers that she has a talent herself: solving crimes.

“Admirers of old comedy sketches and anyone looking for a laugh-out-loud mystery should pick up this series launch by Copperman.” —Library Journal (starred) on Dog Dish of Doom

“Readers will root for Kay to be more than pals with Sam Gibson, proprietor of Cool Beans coffee house—and, of course, to keep Bruno as more than a client. [Filled with] resilient, warm, funny supporting players.” —Publishers Weekly on Dog Dish of Doom

“The wry, feisty heroine is a welcome addition to Copperman’s troupe.” —Kirkus Reviews on Dog Dish of Doom

Kay Powell, theatrical agent to non-human animals, is babysitting—that is, birdsitting—her client, a parrot named Barney, on the set of his new TV show, Dead City. When the show’s charismatic star is shot in his trailer between scenes, the only eyewitness to the crime is—you guessed it—Barney. And even though Kay keeps explaining that even a “talking” parrot doesn’t actually converse with people, the investigators insist on interrogating the bird for information he clearly can’t communicate.

Suspects accumulate like birdseed, and before long it’s clear the killer believes Barney might actually be able to supply useful evidence. Even Barney can’t fly away from this one.  (Amazon) 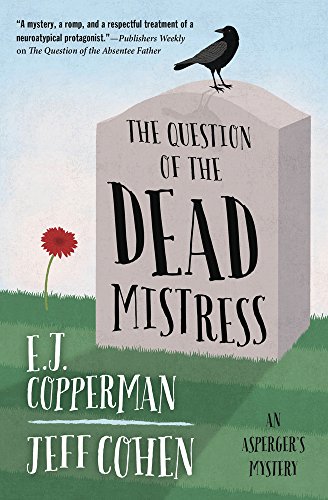 “Readers will delight in watching Copperman’s literal-minded hero grapple not only with unpredictable and nuanced human thinking, but with logic from beyond the grave.”—Kirkus Reviews

“Is my husband having an affair with a dead woman?”

For Samuel Hoenig, the proprietor of a unique agency called Questions Answered, the answer to this most recent question is simple. Since there’s absolutely no evidence that apparitions exist, it would be impossible for Ginny Fontaine’s husband to be having an affair with one.

Wrestling with his complicated feelings for Ms. Washburn, Samuel proposes that she take the lead on the question. As soon as her research begins, the husband in question ends up dead, leaving Janet and Samuel wondering if they stand a ghost of a chance at unraveling this twisted tale of danger and deceit.

“The first-person narration provides insights into the protagonist’s logical, literal thought processes and his perplexity at emotional nuances and social subtleties. Series fans will appreciate the further development of Samuel’s character.”—Publishers Weekly  (Amazon) 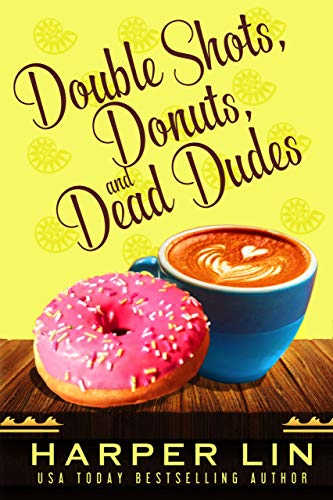 From USA TODAY Bestselling Author Harper Lin: the 8th cozy mystery in the popular Cape Bay Cafe Mysteries. When Fran moves back to her idyllic beach town to take over the family café, she also develops a knack for solving bizarre murders.

In the middle of Fran’s date night with Matt, at Cape Bay’s best Mexican restaurant, Fran’s favorite waiter drops dead. Everyone else thinks Pablo had a stroke, but Fran believes he was murdered because he had been getting strange, threatening notes in his apron at work. As Fran digs deeper into another murder case she shouldn’t be involved in, she learns her beloved waiter had some secrets stewing in his personal life. 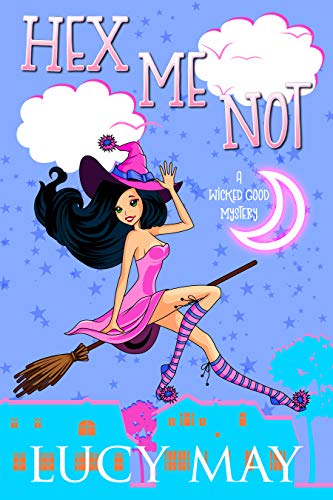 Welcome to Charm Cove, Maine – where the Good are Wicked, and the Wicked are Good… or maybe not.

Moira Wicked is back home for good, no pun intended. She’s settling in to help run Persnickety Potions & Gifts, her family’s store. Even though she’s loath to admit it, she’s a bit relieved to be home. Here in Charm Cove, there’s nothing unusual about the last name Wicked and it’s more uncommon to encounter someone who isn’t a witch, rather than the other way around.

Just when Moira thinks life might be quieting down, there’s a spate of burglaries around town. It’s no accident that the homes and businesses being targeted belong to witches. Once again, the oh-so-charming Charm Cove is all atwitter. Amidst the undercover investigation, tourists are still crowding the streets, seeking the, ahem, magic and charm of the little town.

Moira is smack in the middle of sleuthing out what happened, seeing as Persnickety Potions & Gifts was one of the burglar’s targets. As if she didn’t already have enough going on trying to hold her nosy family at bay.

There’s still that pesky destiny she’s supposed to fulfill—specifically by marrying Liam Good. She might be on the way to falling in love with Liam, but she’s not so sure about marriage yet. A Wicked is fated to fall in love with a Good once every century. No pressure or anything.

Take a visit to Charm Cove, where Wicked meets Good and where you just might find there’s almost always more than meets the eye.  (Amazon) 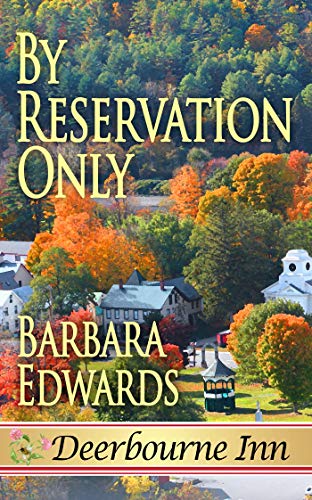 It’s the grand opening of The Deerbourne Inn! Award-winning Chef Nathan Harte has worked long and hard to restore this historic property in Willow Spring, Vermont. He’s ready to greet his guests with fine cuisine, comfortable rooms, and maybe even a ghost or two.
He’s escaping the rat-race of the city for a slower more rewarding life, but is he ready to deal with a broken arm, a quirky arsonist, and a long-ago mystery? And what might he find up in the three-hundred-year-old attics?   (Amazon) 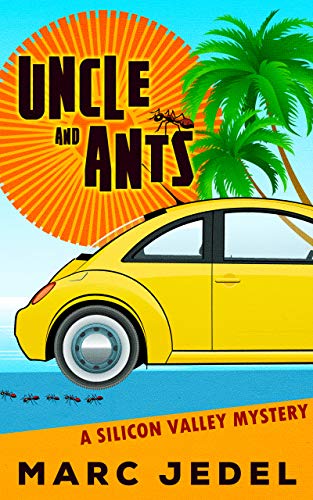 Protect his sister. Solve a murder. Get his eye-rolling, pre-teen nieces to school. And that’s just how Marty Golden’s crazy week begins to unravel.

A mysterious crash hospitalizes Marty’s sister and a nearby murder puts her in deadly danger. Too bad Marty isn’t exactly hero material.

Working in Silicon Valley, Marty’s skills lie more in navigating technology and telling dad jokes than playing an amateur sleuth. Armed with special powers of self-delusion and the inability to leave a coherent voicemail message, Marty bumbles through investigating his sister’s zany HR clients, exposing dangerous secrets and suspects, all while becoming attracted to a suspect.

In the process, Marty stumbles into a drug gang, impersonates an IRS agent, tangles with an assassin, dodges a cantankerous school secretary and is frequently outsmarted by his two sly, yet vulnerable, nieces. This quirky, fashion-backward uncle must save his sister, solve the mystery and get his life back to normal — before it’s too late.

As his eight, or maybe nine, year-old niece would say, “Betcha, you’ll like it.”

Perfect for anyone who loves a humorous murder mystery, including fans of Janet Evanovich, Patricia McLinn, and Jana DeLeon. Buy it now and start laughing today.  (Amazon) 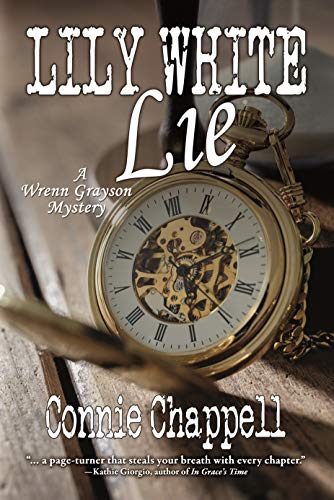 A worried Wrenn connects the messages to her longtime love Gideon and his father.

His father, a prominent banker, vanished after he uncovered a money-laundering scheme.Bret disagrees with Wrenn’s assessment. He believes the messages threaten her. They both agree on the symbolism behind the lilies:

But can Wrenn trust Bret, the man who coincidentally arrived in concert with the first message? The symbolism here is less clear: Bret is a man of intricacies, of light and dark, and lingering shadows.The pocketwatch ticks off the time Wrenn doesn’t have. Danger mounts while every viable solution evaporates into mist.

˃˃˃ BEST THRILLERS The Bottom Line: Fans of cozy mysteries will enjoy Wrenn Grayson in Lily White Lie and the well-crafted investigation at the core of the book.

Scroll up and grab a copy of Lily White Lie today.  (Amazon) 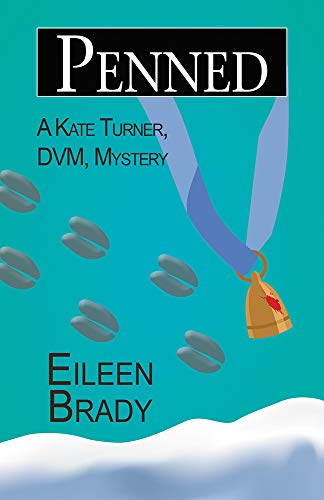 Dr. Kate Turner, DVM, is seven months into her one-year contract to cover for a Hudson Valley vet taking a year-long world cruise. She’s getting used to the hospital and house-call workload but not to the sometimes dangerous, if not deadly, critters – animal and human – she meets.

Eighty-something-year-old Gloria LaGuardia has been installed at an assisted living center by her niece. They bump into Kate at the Oak Falls annual Halloween street bash. And while Gloria’s conversation indicates some mental confusion – she asks a couple dressed as rabbits if they are real or not – she’s still sharp. And she says, “Someone evil is here. I saw him.”

Saw who? Will this chance meeting draw Kate into the path of Carl Wolf, a notorious fugitive twenty-one years on the FBI’s Most Wanted List? Is Wolf hiding in plain sight in or around Oak Falls?

When Gloria, once an artist endowed with a sharp eye, is murdered, Kate doesn’t know what to think. But author Tucker Weinstein approaches her at Gloria’s funeral and indicates he believes the old woman. Further, he’s devoting a chapter in his book to Carl Wolf.

The FBI doesn’t appear interested. Gloria’s family just wants to move on. But publicity-hungry Tucker mentions Kate in a newspaper interview that goes viral. She’s overloaded with new clients like Billy, a Nubian stud goat living penned up with alpaca, llamas, and more goats on a local farm producing milk, wool, and cheese, and a grumpy Chihuahua dressed up like a Thanksgiving turkey. Yet she senses someone is now following her. An undercover FBI agent? Carl Wolf on the prowl?

Determined not to be a victim, Kate digs deep into the arson/murder Wolf committed long ago. Are the clues to unmasking him hidden in the past, or closer than she thinks?  (Amazon)