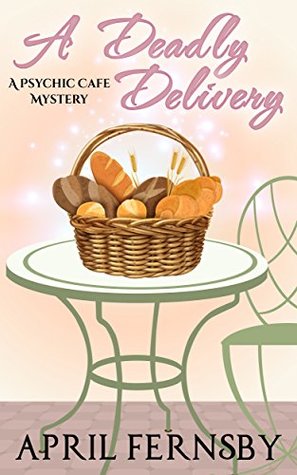 Karis Booth has had psychic abilities for as long as she can remember. But this is the first time she’s used them to solve a murder.

Things are changing rapidly for Karis. As well as filing for divorce from her unfaithful husband, she decides it’s time to make peace with her estranged sister, Erin. With trepidation, Karis visits the café which Erin owns. To her great relief, Erin welcomes Karis back into her life with open arms.

During their reconciliation, a young woman, Carmel, calls into the café with a bread delivery. As Karis watches Carmel, she experiences a strong psychic vision. She sees two shadows following Carmel. Only one of the shadows belongs to Carmel — the other belongs to the person who is going to murder her later that day.

With help from her sister and an old neighbour, Karis does all that she can to find out who murdered Carmel. It doesn’t help that the investigating officer is an ex-boyfriend who broke up with Karis because he couldn’t cope with her psychic abilities. Despite this, Karis won’t rest until she finds the killer.   (Goodreads)

The characters are well developed and well rounded.  I really enjoyed getting to know Karis and her sister Erin.  You can tell they care about each other and they support each other as only sisters can do.  Karis is a strong woman who has had psychic visions for as long as she can remember. Sometimes she thinks of these visions as a curse and sometimes as a blessing.  When she foresees the death of a young woman she feels compelled to try and figure out the killer. With the help of Peggy, her mom’s elderly neighbor, that is what she sets out to do.

The writing style flows smoothly and the book is a quick easy read.  I really liked the character portrayals and I really felt that Karis is a special woman.  She is caring and enjoys spending time with the elderly and tries to help them whenever she can.  I would like to know her in real life. The mystery was well written and there were enough suspects to consider and clues to sift through.

I would recommend this book to anyone who enjoys a well crafted cozy mystery.  Psychic books are among my favorite and this one did not disappoint. I will definitely be reading the other books in this series.