Here is a list of some of the new releases for the week of March 4th, 2018.  I am going to divide the list into 4 days because there are so very many of them this week. Today is first  day of my list.  Hope you find some selections for your weekly reading.  Enjoy and happy reading.

Rear Garden: The Cat Who Knew Too Much is the second novel to feature York’s finest feline sleuth, Theodore.

After Theodore moves to the York suburb of Acomb with his owners, Jonathan and Emily, Jonathan breaks his foot and is incapacited for several weeks. With nothing to do but watch Hitchcock films and stare out of the French doors at the houses behind, he soon suspects that there is a murderer at large. Theodore knows that there is a killer in the suburban midst. But how is he to prove it and make sure that the killer gets what’s coming to her.

With many references to classic Hitchcock fillms, Rear Garden is a comic romp through the leafy suburbs, leaving many a bloody footprint (and pawprint) on the well-trimmed lawns.  (Amazon)

With murder, everyone pays a price …
Why would a killer ignore expensive jewellery and take a pair of turtledoves as the only bounty?
This is only one of the questions that piques Chief Inspector Domenic Jejeune’s interest after a senior attaché with the Mexican Consulate is found murdered alongside the director of a local bird sanctuary. The fact that the director’s death has opened up a full-time research position studying birds hasn’t eluded Jejeune either. Could this be the escape from policing that the celebrated detective has been seeking? Even if it is, Jejeune knows he owes it to the victims to solve the case first. But a trail that weaves from embittered aviary owners to suspicious bird sculptors only seems to be leading him farther from the truth. Meanwhile, Jejeune is discovering that diplomatic co-operation and diplomatic pressure go hand in hand.
With two careers hanging in the balance, the stakes have never been higher for Inspector Jejeune. And this time, even bringing a killer to justice may not provide the closure he’s looking for.  (Amazon) 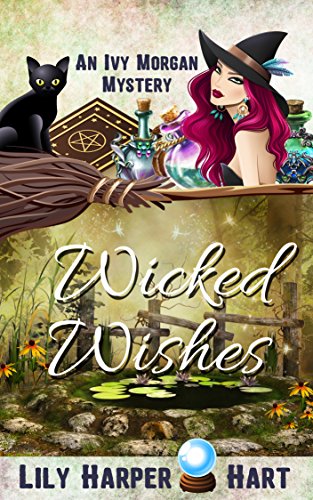 Spring has hit Shadow Lake and the residents are ready to take advantage of Michigan’s warmer weather.
For Ivy Morgan, that means deciding on the finishing touches for her basement renovation project and toiling away at her nursery to get flowers and bushes ready for the upcoming planting season.
All that changes when a shot rings out and Ivy finds a dead woman in her driveway. The woman was supposed to be there, she was Ivy’s designer, after all. Still, Ivy can’t help but wonder if the designer was the intended target. The timing seems a little too convenient.
When a woman from her fiancé Jack Harker’s past pops up in town – a woman with a shady history and murky designs on Jack – Ivy can’t help but wonder if she was the one who was supposed to die.
As Jack and his partner dig deep into the designer’s personal life, they’re left at a crossroads. If they go the wrong way with the investigation, a killer could get away with murder. If they go the right way, not everyone might live to see the outcome.
Even if Ivy wasn’t the original target, though, she’s certainly one now. A killer is stalking Shadow Lake’s favorite reluctant witch, and Ivy might not survive to solve a case that threatens to unravel the very foundations of her world.  (Amazon) 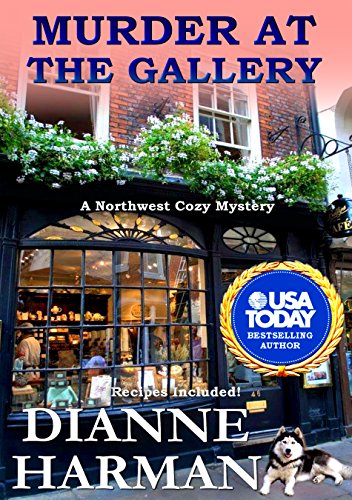 One bright Spring morning when Philippe Germain, the owner of a prestigious Seattle art gallery, woke up, he didn’t know he’d be dead in a few hours.

Do you have a photographic memory? What would you do if you were in Provence, France, and happened to see the same painting for sale by the same dead artist that your best friend had just bought from a gallery in Seattle?

That’s DeeDee’s predicament. Join her, along with her significant other, Jake, a private detective, and her husky dog, Balto, as they search for the murderer of a well-respected Pioneer Square art dealer, but did he have secrets?

There’s no lack of suspects. Could it have been the gallery owner’s French wife, who is also his nephew’s lover? Or the nephew who owns a gallery in Provence? What about the struggling artist who had a gift for reproducing famous artists’ works? Maybe even the young retired Microsoft millionaire who had bought many paintings from the gallery? And what about DeeDee and Jake’s friend, ex-mobster Al De Duco, who had also bought a painting from the gallery?

This is the sixth book in the Northwest Cozy Mystery Series by USA Today and Amazon Chart #1 Bestselling Author, Dianne Harman.

You can enjoy this book for free with Kindle Unlimited!  (Amazon) 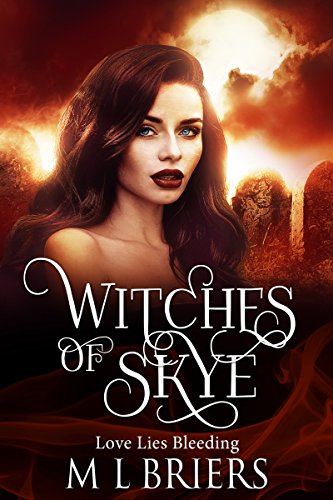 Could life ever really return to normal? Bat-boy and Split-Personality were dating my sisters, Malachi was, well, Malachi, and Jack was definitely gone for good this time, and then he came back. Why? Because some idiot murdered another idiot and he was sent to investigate. Lucky me.
There was a new witch in town, Ross was in trouble with Lachlan’s pack, and that old dark magic was bubbling away like Gran’s cauldron on steroids. What’s a witch to do? Bake some cookies, solve a murder, save some lives, oh, and save Skye from imploding, exploding, or whatever was going to go wrong this time.
Would we all survive? Sometimes you just need to bend over and kiss your backside goodbye – this wasn’t one of those times.

Book Three in the standalone Paranormal Fantasy series.
Book One – Witches of Skye – So it Begins
Book Two – Reap What You Sow  (Amazon) 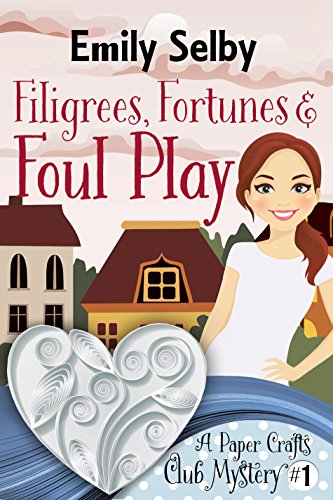 Should the heart or the head lead when trying to solve a murder?

Single mum, Katie Redford, would prefer to indulge in her hobby of paper crafts, rather than juggle her part-time jobs. But when she discovers the body of her best cleaning client with a quilling needle in the neck, Katie becomes one of the key suspects and her life takes a sharp turn.

Katie’s job as a police clerk gives her the opportunity to share her hunches with the Inspector leading the investigation. But he’s all-logic-and-evidence and not exactly open to listening to her intuitions.

Caught in the clash between hunches and cold logic, she is forced to look at her hometown and its quirky inhabitants in a way she’s never done before.

Will Katie be able to find the murderer, convince the Inspector to listen to her, and clear her name before another person dies? 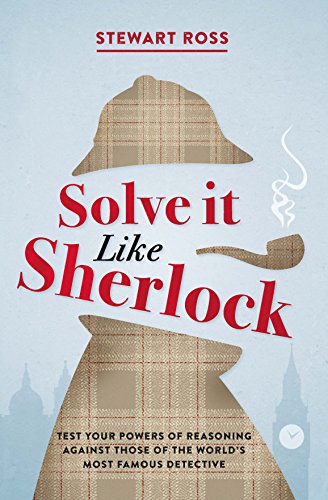 If you’ve always fancied yourself a bit of a Sherlock Holmes, there’s no better way to test yourself than against these ingenious puzzles.

In this intriguing book, Stewart Ross presents 25 new Sherlock Holmes cases and challenges you to pit your powers of deduction against those of the Great Detective. Full of the atmosphere and ambience of 221b Baker Street, you’ll feel like you’ve stepped back into the pages of Arthur Conan Doyle . except, this time, with the chance to prove you’re a match for the super sleuth.

Each case provides all the evidence you’ll need to crack it, provided you’re sharp enough to pick up on all the clues, with challenges from codebreaking to lateral thinking, memory to logic . and of course, how Sherlock came up with the solutions can be found at the back of the book in case you’re feeling more like Watson than Holmes. The detective managed to solve 24 out of the 25 cases in this book – perhaps you can go one better.  (Amazon) 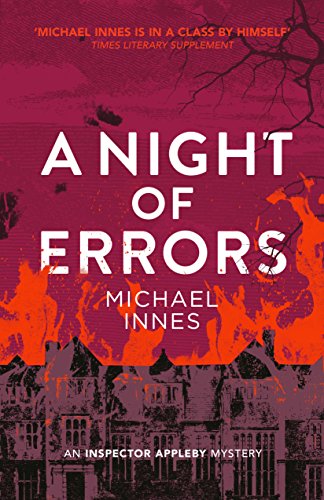 On a hot summer night, Sir John Appleby is dragged from his newly-wedded bliss to investigate a disturbing crime that predates itself.

It seems the Dromio family history is steeped in both legend and tragedy. With a long-unbroken tradition of twin male heirs, Sir Romeo Dromio lost his mind when his wife gave birth to triplets. In a fit of madness, he set the nursery on fire and rescued only one of his infant sons.

Now, the family business is failing, and the surviving triplet Oliver has gone abroad in search of a solution to their ailing fortunes. Lady Dromio and her adopted daughter, Lucy, anxiously await his return, and tensions run high as his arrival home draws near. Lady Dromio fusses over the service, the Reverend is hallucinating, Lucy’s odd remarks become sinister threats, and Mrs Gollifer is hiding something.

The household squabbles are drawn to an abrupt halt when Oliver is found dead in the study, his body smoldering in the fireplace. And when another body shows up, Appleby must sift through family secrets, spurned lovers, and false confessions to identify the killer before the whole thing goes up in flames.  (Amazon) 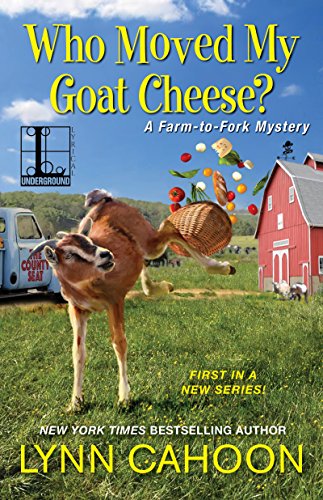 Angie Turner hopes her new farm-to-table restaurant can be a fresh start in her old hometown in rural Idaho. But when a goat dairy farmer is murdered, Angie must turn the tables on a bleating black sheep . . .

With three weeks until opening night for their restaurant, the County Seat, Angie and her best friend and business partner Felicia are scrambling to line up local vendors—from the farmer’s market to the goat dairy farm of Old Man Moss. Fortunately, the cantankerous Moss takes a shine to Angie, as does his kid goat Precious. So when Angie hears the bloodcurdling news of foul play at the dairy farm, she jumps in to mind the man’s livestock and help solve the murder. One thing’s for sure, there’s no whey Angie’s going to let some killer get her goat . . .

“Murder, dirty politics, pirate lore, and a hot police detective: Guidebook to Murder has it all! A cozy lover’s dream come true.”
—Susan McBride, author of The Debutante Dropout Mysteries