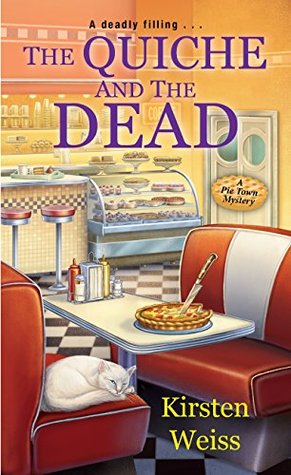 Is Val’s breakfast pie the quiche of death? Owning her own business seemed like pie in the sky to Valentine Harris when she moved to the coastal California town of San Nicholas, expecting to start a new life with her fiance. Five months–and a broken engagement–later, at least her dream of opening a pie shop has become a reality. But when one of her regulars keels over at the counter while eating a quiche, Val feels like she’s living a nightmare. After the police determine the customer was poisoned, business at Pie Town drops faster than a fallen crust. Convinced they’re both suspects, Val’s flaky, seventy-something pie crust maker Charlene drags her boss into some amateur sleuthing. At first Val dismisses Charlene’s half-baked hypotheses, but before long the ladies uncover some shady dealings hidden in fog-bound San Nicholas. Now Val must expose the truth–before a crummy killer tries to shut her pie hole. (Goodreads)

The characters are well rounded and well developed.  I thought Val was smart and a hard worker who has realized her dream of owning a pie shop.  When one of her customers dies after eating a quiche, she realizes that she is going to have to search for the killer herself. And she needs to do it fast, before her pie shop goes up in smoke.  She’ll have the help of her pie crust maker, who is not afraid of digging deep for clues.  Their escapades in crime solving lead to some very funny situations.

The writing style flows smoothly and the book is a quick easy read.  She is talented in creating small town settings and all the gossiping and neighborliness that occur in them. She is very talented in her descriptive writing and through much of the book, I felt like I was right there in San Nicholas, visiting, meeting people and watching all the action taking place.  I thought the mystery was well written and there were enough suspects to consider and clues to sift through, and I was surprised who the culprit was.

I would recommend this book to anyone who enjoys a well crafted cozy mystery.  This is the first book in this series and I am looking forward to reading the next book in the series.

I received a free copy of this book from NetGalley in the hopes of receiving a honest review.  I would like to thank NetGalley and Kensington Books for the opportunity to read and review this book.